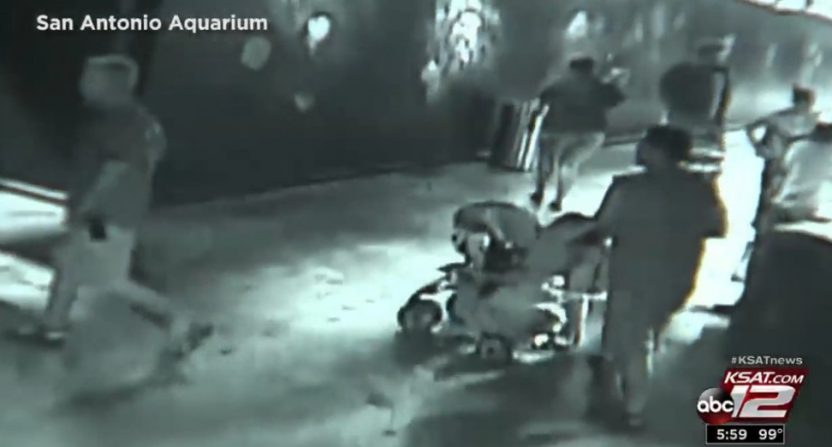 We’ve seen plenty of odd heists over the years, from cheese to pots of gold, but sneaking a shark out of an aquarium in a stroller is a new one. That’s what two men and a woman in San Antonio did this past weekend, though, taking a horn shark (about one and a half feet long) from an open pool in the San Antonio Aquarium (which is actually located in neighboring city Leon Valley) Saturday and sneaking it out inside a baby stroller. Mariah Medina of local ABC affiliate KSAT has more details:

According to Leon Valley police Chief Joseph Salvaggio, the group stole the shark from an open pool where visitors are allowed to reach in and pet the various species in the tank. Two men and a woman are wanted in connection with the theft.

Salvaggio said one of the men grabbed the shark by its tail while the others wrapped it in a wet blanket, went into a back room, put the shark in a bucket and put the bucket in the stroller.

…”When we first got the call, we thought it was kind of a hoax being that it was Shark Week last week,” Salvaggio said. “But it turns out someone actually went inside the aquarium there in Leon Valley and stole a horn shark.”

…[Aquarium general manager Jenny] Spellman went out to the parking lot to confront the group about the shark theft. One of the men refused to let Spellman search the truck and said that his son was sick and that he needed to leave immediately.

The man got into the truck and drove away, leaving the woman and the other man behind.

That is quite the brazen heist. And it’s understandable why some might try this, given that this weekend also saw a Wall Street Journal article about the increase in super-rich people trying to keep sharks as pets. That often doesn’t end well for the sharks, given the difficulty of keeping them alive in captivity (and also the challenges in keeping anything else in a tank with them alive), but it may be motivating these kinds of crimes. It doesn’t sound like this will end well for anyone, though; the police have a person of interest in custody and have impounded the truck, but the shark may not survive thanks to the shocks to its system (including from the bleach solution in the bucket). So maybe keep the sharknapping to fiction from now on?