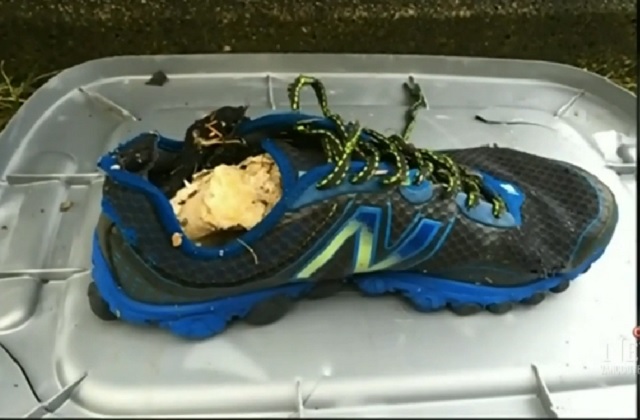 Today in “this world can be truly messed up,” severed feet keep showing up on the west coasts of the United States and Canada.

As reported by Yanan Wang of the Washington Post, 16 detached human feet found in running shoes have washed up in Washington state and British Columbia, Canada since 2007, with a majority of them being right feet.

“Most of these have been right feet. All of them have worn running shoes or hiking boots. Among them: three New Balances, two Nikes and an Ozark Trail.”

One of the severed feet was discovered in B.C. when a family taking a walk spotted something in the sand. Here’s how the incident was described to the CBC:

“He picked it up and brought it out on to the beach,” she told the CBC, “and we had a look at it for about five minutes and we thought, it almost looks like there is an actual foot bone in it.”

The Post reports finding feet in B.C. became increasingly problematic, as five were reportedly found in 2008. There are multiple theories on what happened, including speculation that the parts are from the aftermath of suicides, gang violence, natural disasters or the work of a serial killer.

There’s a more scientific explanation, as a study found bodies floating in water are “subjected to the push and pull of the environment” which means the ocean could have pulled apart the bodies and drifted them towards the nearest coastline. B.C. Coroners Service dentist Bill Inkster agreed with that assessment, saying the feet were decomposed. Still, it’s awfully suspicious and very random. Why are most of the feet wearing running shoes, for example?

It’s odd that people continue to find feet, but as The Daily Beast points out, perhaps the phenomenon is growing because people now know to look for shoes on the coastline.

Either way, if you’re living in B.C. or Washington, be aware that a trip to the beach may be potentially scarring.