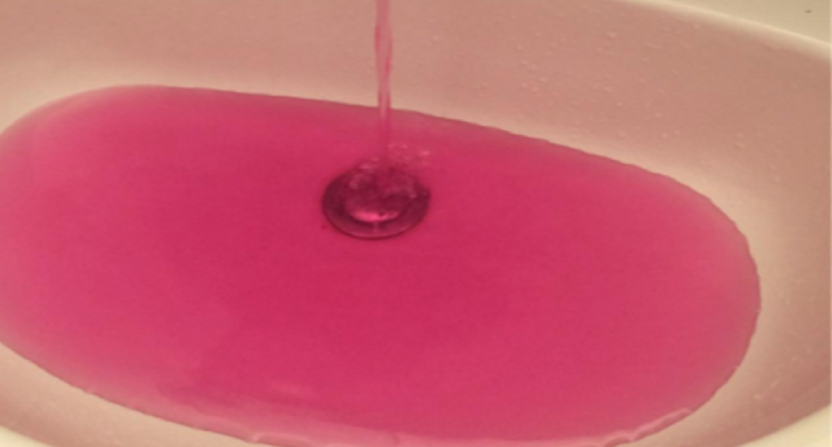 I’d probably freak out and run far, far away from where I was and wonder why I suddenly was transported into a bad “Friday the 13th” sequel, myself. Up until today, nobody actually had to deal with this problem because it was something out of science fiction. But for the fine folks of Onoway, Alberta, a town of 1,039 people about 60 miles from Edmonton, this weird construct of a bizarre mind actually happened.

Vicki Veldheyzen Van Zanten said her daughter told her to come into the bathroom where she found the water was pink, for some reason. She had never drank the tap water from the town because of the taste, but now that its pink, she and her family won’t be using it, period. As you would when you see pink water.

“They assured me that everything was very good. It was healthy, it was fine. It wasn’t going to turn me into Spider-Man, which maybe some days I would like to be,” fellow Onoway resident Lisa Schute laughed. “I was OK with it.” If the pink water would turn me into Spiderman, give me a jug of the stuff and I’ll down it in a heartbeat. Schute clearly wasn’t phased by it, because she used it to make her morning coffee.

“I kind of took a little bit of a taste of it this morning and it didn’t seem any different, except that it was pink,” she said. “It tastes fine. It tastes really good.”

So why was the water suddenly pick? The town says that a chemical used during routine flushing of plumbing lines and filter back washing got into the line when a valve didn’t shut properly. That allowed potassium permanganate to get into the water, turning it pink. Most every town uses it, especially for water treatment purposes. When it is dissolved in water, it turns pink or purple in color.

“The Town of Onoway sincerely apologizes for any alarm this may have caused. We assure you our water is safe and Public Works is doing everything they can to abate the situation as quickly as possible,” a town statement said.

Alberta’s Health Services says the water is healthy to drink, although people with sensitive skin might not want to use it for bathing because of the potential for slight skin irritation.

“The vast majority of individuals will not experience any impacts associated with normal consumption and no long-term health risks are associated with consuming this water,” AHS spokesperson Shannon Evans said Tuesday.

So the pink water came from a small mistake from a valve not shutting properly. Seems normal. But pink water would freak you out, wouldn’t it?