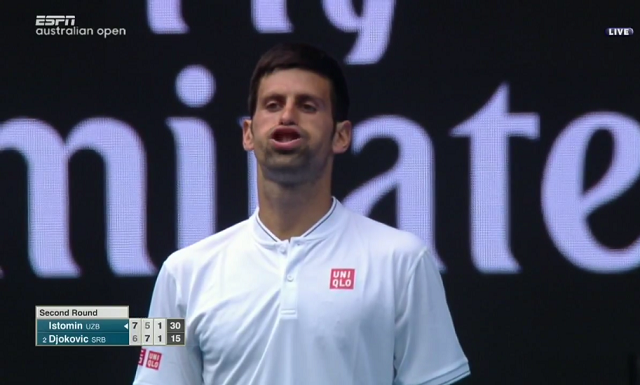 After what had been such a crappy NFL playoffs, we finally — but as expected with this one — got a terrific game with the Green Bay Packers and Dallas Cowboys in the NFC Divisional Round.

On 3rd and 20 in the final seconds of the fourth quarter, Aaron Rodgers drew up a play in the huddle backyard style.

Cobb said the final play was not an actual playcall. Rodgers just told each receiver what to do, like a kid drawing in the dirt. Seriously.

And made this absolutely ABSURD throw (and also one heck of a sideline catch by Jared Cook, of course):

That was followed by Mason Crosby somehow sneaking in this 51-yard field goal that sure appeared to be missing wide left at first:

But it was an awesome season for the Cowboys who have a great young quarterback-running back duo to look forward to over the next hopefully several years. And this spin move Ezekiel Elliott put on Clay Matthews was dirty:

The world’s No. 117 player, Denis Istomin, somehow beat Novak Djokovic (winner of five of the last six Australian Opens) on Thursday in Melbourne. It was an amazing match (that lasted four hours, 48 minutes), and one of the most shocking upsets we will see in sports all year.

And here’s a funny thing Djokovic did:

Zaza Pachulia fouls Russell Westbrook and then stands over him

Where were Russell Westbrook’s Oklahoma City Thunder teammates after this one?

After the game, Westbrook told the media, “I’m gonna get his ass back for that one.”

Russell Westbrook with the most obvious traveling violation of all-time

In that same game, a much lighter moment that had ESPN’s Mike Breen and Jeff Van Gundy cracking up. Russell Westbrook basically walked all the way to halfcourt without dribbling:

Westbrook did have this dunk, though:

Travis Kelce on Chiefs-Steelers ref that made holding call: “He shouldn’t even be able to work at f*cking Foot Locker.”

The Kansas City Chiefs were called for holding after appearing to tie their AFC Divisional Round game late in the fourth quarter against the Pittsburgh Steelers. Well, Chiefs start tight end Travis Kelce didn’t agree with the call, to say the least. And he was quite critical of referee Carl Cheffers after the game:

In-game 360 dunks are amazing (for multiple reasons to me as I explained in my post on this), and Louisiana Tech’s Jacobi Boykins pulled one off recently against Charlotte: