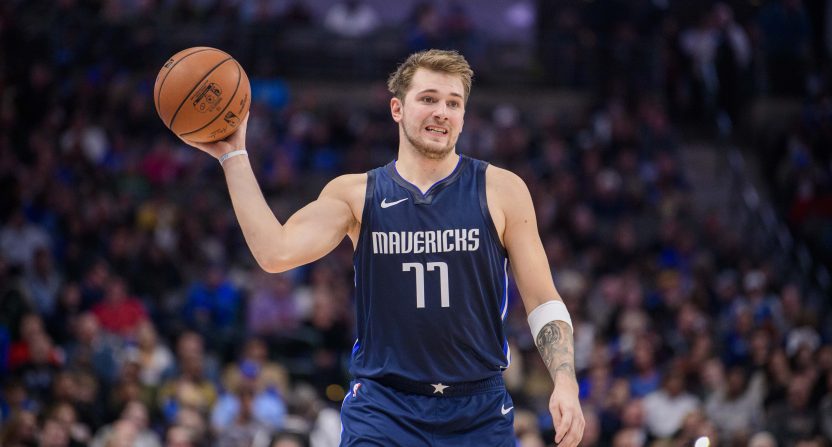 Thanksgiving is about the three “Fs:” family, food, and football. Unfortunately, some of our less-than-pleasant relatives make us think of another F word. Have no fear. In the spirit of the holiday season, TheComeback.com aims to promote harmony.

Here are some suggested conversation starters to help keep the peace:

What the hell were Phoenix and Sacramento thinking? They passed on Doncic, and Atlanta drafted and then traded him for Trae Young. Look, Young is having a nice start to his career. But Doncic is the best 20-year-old the NBA has seen since LeBron James. You could argue that nobody has ever been this good at this stage of his career. Doncic isn’t even old enough to drink and he’s a top 10 player. He entered this week leading the league in player efficiency rating (33.35). No. 2 was 2019 MVP Giannis Antetokounmpo (32.05). No. 3 was 2018 MVP James Harden (30.18). With Doncic and Kristaps Porzingis leading the way, the Dallas Mavericks will be terrifying in a few years.

What the hell are NFL teams thinking? They continue to hire Belichick assistants as head coaches even though the track record is mostly terrible. When the best guy on that coaching tree is Bill O’Brien (49-42 record, one playoff victory), you need to look elsewhere for your hires. The Detroit Lions thought Belichick’s former defensive coordinator Matt Patricia was going to be the answer. Patricia and that annoying pencil behind his ear have done nothing (9-17-1). And what about Miami Dolphins coach Brian Flores (2-9)? Yes, management betrayed him by getting rid of all his decent players. Still, this is one of the worst teams (minus 16.6 scoring differential) in recent memory.

Stephen A. Smith makes it harder to enjoy ESPN

What the hell is ESPN thinking? Smith has become THE voice for the Worldwide Leader in Sports. He’s spewing his maximum volume hot takes on every conceivable platform. Obviously, ESPN sees his contributions as financially valuable because they just gave him an $8 million per-year deal. But Smith doesn’t make ESPN better. He just makes it louder and more annoying. If First Take was a satire, it would be a lot more interesting. But Smith is neither funny nor insightful. He just has the biggest megaphone. It hurts our ears. However, Smith can’t hear our complaints. His ears are stuffed with cash.

What the hell is Jason Garrett thinking? Dak Prescott, Ezekiel Elliott, Amari Cooper are young and skilled. They have the highest-paid offensive line in the NFL. A decent defense with speedy linebackers. This is a team built to win now. But Garrett keeps screwing things up with lousy game management, especially with his conservative play-calling. Dallas (6-5) could’ve won at New England and should have a better record. Jerry Jones has the right to be pissed, and Garrett’s tenure as coach could end even if this team reaches the playoffs.

The College Football Playoff needs to be expanded

What the hell are athletic directors thinking? A four-team playoff is insufficient. The powers that be say they’re keeping it exclusive to preserve the sanctity of the regular season. Please. The powers that be say expanding the playoffs would make non-playoff bowl games seem irrelevant. Guess what? They’re already irrelevant. No one cares about the Outback Bowl, Camping World Bowl, or Cheez-It Bowl unless you’re a player, coach, or alum of the participating school. Make it an eight-team field with the conference champions from the Power 5 with three wildcards, with one spot reserved for the highest-rated Group of Five program.

What the hell are the Portland Trail Blazers thinking? For most of the latter part of his pro career Anthony has been the NBA equivalent of The Cooler. If you put him on your roster, your luck is about to take a turn for the worse. Portland is 1-3 with Anthony, who’s shooting a career-worst 39.1 percent with a player efficiency rating of 10. In fairness, Anthony must be rusty after appearing in only 10 games last season. And he did score a season-high 25 points in a 117-94 victory over Chicago. Still, no one was in a rush to sign him. He’s a volume shooter who at the age of 35 can’t consistently contribute in ways other than scoring.

What the hell is commissioner Rob Manfred thinking? Baseball’s fanbase is aging. The sport is desperate for youngsters. Getting rid of 40-minor league affiliates seems like a bad idea. Minor league baseball is cheap, family-friendly fun. Millions go to the games to see the next wave of rising stars. And yet, Manfred wants to shrink the minor-league system, saying it’s too costly and there’s too much travel. First, major-league revenues have never been better. Plus, cheaper travel can be addressed through realignment.

Everyone is laughing at the Golden State Warriors

What the hell was the NBA thinking? It should’ve never let Kevin Durant join this team in the first place. It was so unfair. But now, we can sit back and giggle at this dumpster fire. Golden State (3-15) has the league’s worst record and second-worst scoring margin (minus-9.9). Steve Kerr doesn’t look so smart now that he doesn’t have Durant, Steph Curry, and Klay Thompson. Instead, he’s working with guys we’ve never heard of: Eric Paschall, (?) Ky Bowman (??), and Alec Burks (???). Even Warriors fans wouldn’t be able to recognize their starting lineup these days.

What the hell is Lucasfilm thinking? Ok. Ok. The trailers look promising, but so what? So did the ones for The Last Jedi, which has the lowest-rated Rotten Tomatoes Audience Score (44%!) among Star Wars films. The Last Jedi was an extreme letdown. Many lost interest in this 152-minute drudgery that’s about 30 minutes too long. Why did this movie go out of its way to make us dislike Luke Skywalker? #Ugh. Hopefully, The Rise of Skywalker will be better.

What the hell are bakers thinking? Few things in life are more disappointing than reaching for what you believe is a chocolate chip cookie, getting ready to enjoy the sweet gooeyness, and suddenly being greeted by the awful realization that those aren’t chips. They’re raisins! Mother******. Oatmeal raisin cookies are not desserts. They’re an evil trick perpetrated by Satan’s helpers. Once you bite into them you experience depression, regret, anger, and the loss of God’s love.