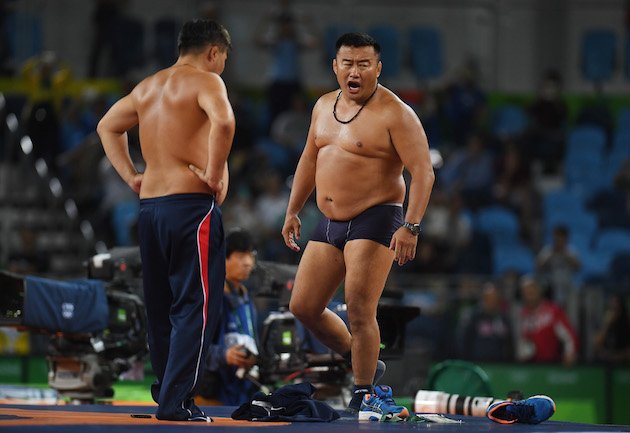 Earlier this month, The Comeback chronicled the Top 10 Sports Moments of 2016. Now it’s time to look at the lighter side of the year in sports, as we count down the most laugh-out-loud worthy moments from the past 12 months.

Our list of the top sports bloopers of 2016 has it all: fighting, dumbfounding play calls, coaches stripping down to their underwear, and did we mention more fighting? These were our favorite sports moments from 2016 that made us LOL, ZOMG, ROTFLMAO, and all those other annoying acronyms and emojis too.

10) Soccer teammates get ejected for fighting each other

Eoin Doyle and Jermaine Beckford of Preston North End in the English Championship weren’t the first teammates to fight each other during a real live soccer game, but that doesn’t make it any less bizarre to see two guys on the same team duking it out. To add to the indignity, both were given a red card and Preston fans who made the trip to Sheffield Wednesday were given a refund.

Former Wisconsin star Sam Dekker is averaging over seven PPG this season in the Houston Rockets rotation as they sit tied for third in the Western Conference. That’s not bad. What was very bad was this attempt at a one-man fast break in New York that saw him stumble and fall, and the ball bounce off his face out of bounds. Dekker probably couldn’t do that again in 100 attempts if he was trying.

8) BYU runs the most insane fake punt in history

You really have to admire BYU’s courage because nobody, and I mean nobody, would ever expect a team to run a fake punt from inside their own end zone. Let alone a fake punt out of your own end zone on 4th-and-19!!! Sadly, despite the element of surprise, the fake never stood a chance. Sometimes, discretion is indeed the better part of valor.

7) Soccer goalie throws ball into his own net

Fans of Minnesota United had to be thrilled when it was announced that the club would “graduate” from playing in the NASL to being awarded an MLS expansion franchise as the league’s 22nd team. Hopefully, they don’t take this play from the minor leagues with them, though. Watch as goalkeeper Sammy Ndjock throws the ball into his own net.

Credit to Ndjock and United for having a laugh about it with this video afterward.

South Carolina State needed all the help they could get to stay competitive on the road at Clemson. What they did not need was returner Ahmaad Harris forgetting the basic rules of college football. Harris took the ball in the end zone and threw it to an official without actually downing the ball and taking a knee. Clemson recovered and scored the weirdest touchdown of the year.

In what may be the most painful LOL moment of 2016, this FC Puerto Rico defender makes the ultimate sacrifice trying to prevent a goal by Miami FC. By trying to slide in to clear the ball off the line, he misses and instead slides groin-first into the goal post. There aren’t many things in life that should ever be done groin-first, but as a sports blooper, it works on so many levels.

Ernie Els is one of the greatest golfers of his generation, a multi-time major winner. But on the first hole of the 2016 Masters, he looked like a young child playing mini-golf for the first time. Els took six strokes to hole out from just a couple feet away. He carded a 9 on the first hole and shot a first-round 80. Where’s the shot limit when you need it?

This NASCAR truck series “fight” was one of the most hilarious moments of the year. John Wes Townley and Spencer Gallagher came to blows after crashing during a race at Gateway Motorsports Park. But the fight looked like something you’d see on Jerry Springer versus the UFC Octagon.

Gallagher never even tries to throw a punch, Townley connects on the worst DDT ever seen, and the pair just kinda grab each other. Fox Sports even had Jim Ross provide original commentary for the “fight,” which makes it even better.

The best part might be that this wasn’t even the only fight in the truck series this year. Watch Cole Custer try to deliver this flying forearm to John Hunter Nemechek after a race in Canada.

Who would have thought an Olympic wrestling match between Mongolia and Uzbekistan would produce our top LOL moment of the year?

After a controversial refereeing decision reversed what would have been a bronze medal for Mongolian wrestler Mandakhnaran Ganzorig in the 65 kg weight class, Mongolian coaches Tserenbaatar Tsogbayar and Byambarinchen Bayaraa responded in the most amazing way possible, by stripping down to their underwear in front of God and everyone.

The coaches were banned for three years, but it was definitely worth it, right? Could you imagine if this ever takes off in American sports? Maybe Rex Ryan will give it a shot before he’s fired by the Bills…