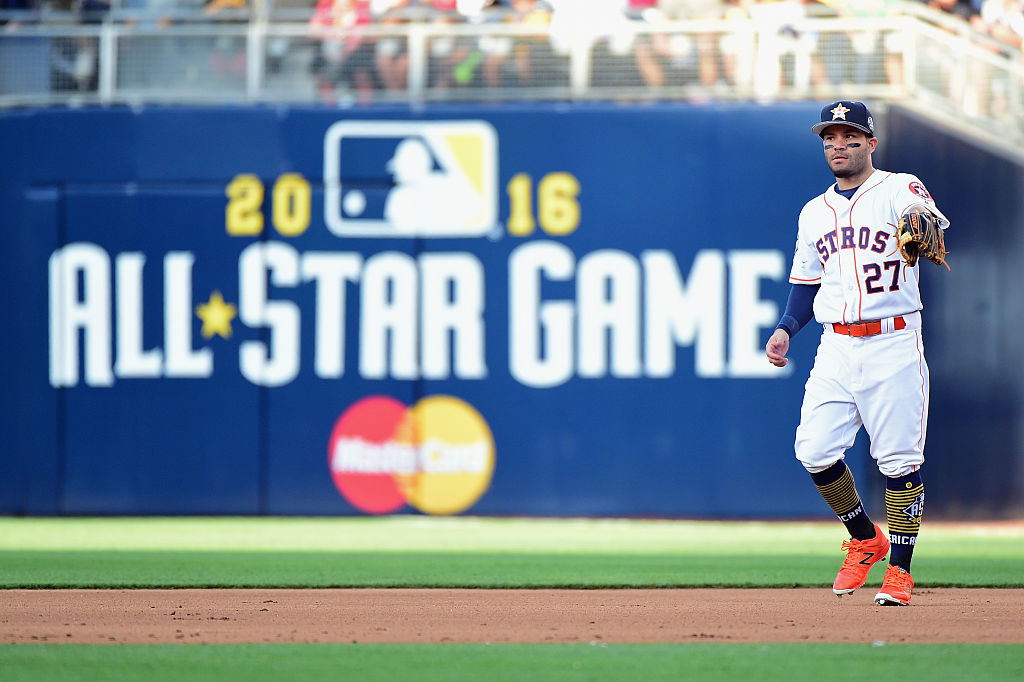 With the MLB All-Star Game taking center stage this week, we’ve officially hit the dog days of summer on the sports calendar. This means a few things for sports fans.

One, filler events like hot dog eating contests and little league baseball are getting or about to get headline treatment from ESPN.  Two, it is a reminder of one of the single dumbest rules in sports, home field advantage in the World Series being decided by an exhibition game.

With that in mind, let’s take a look at that and some of the other dumbest rules in sports. 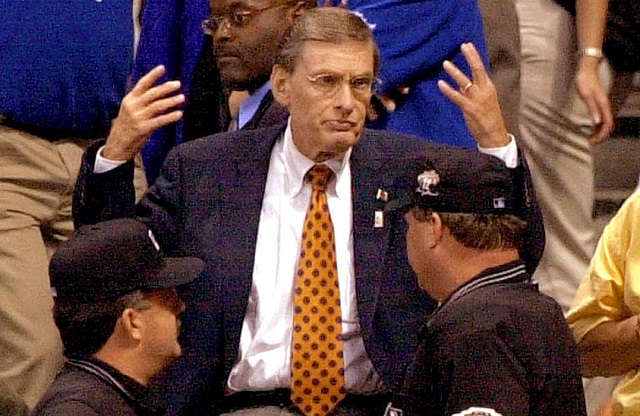 The greatest example of taking a sledgehammer to kill a gnat, baseball’s overreaction to the infamous tie in the 2002 All-Star Game, is one of the most asinine rules in sports. Sure, Uncle Bud Selig was embarrassed in his hometown of Milwaukee when both teams ran out of pitchers. Unlike other events later in our list… it’s perfectly reasonable for an exhibition game to end in a tie. But no, now we live in an era of THIS TIME IT COUNTS!

So, even though the game is an exhibition in every way, the AL will now host Game 7 of the World Series no matter the records of the participating teams. Let’s calmly, for the sake of posterity, count the ways this is insane.

** The best players aren’t guaranteed to play in the game and if they are, they have minimal impact. The exhibition nature of the game is shown by the absurd box score each and every year. If both teams played the best players from the best teams (you know, the ones with the potential to play in the World Series) and played the whole game to win, maybe we’d get somewhere. Instead, the 2016 All-Star Game had a combined 19 pitchers where no pitcher threw more than 1.2 innings. 41 players registered an official at-bat in last night’s game. The National League’s hopes for home field advantage in the World Series came down to Nolan Arenado of the Colorado Rockies in the ninth inning last night. The 40-48 Colorado Rockies.

Then there’s the makeup of the rosters. Fans pick the starters and every team, no matter how terrible they are, has to have a representative. That’s fine for John Scott in an NHL All-Star Game that is meaningless. But when something tangible is on the line? Please.

** The game isn’t always taken seriously. Take Marlins Pitcher Jose Fernandez, who came out before the game and said he would gladly serve up a home run to Red Sox retiree David Ortiz.

Jose Fernandez has a parting gift planned for David Ortiz in his final All Star Game. https://t.co/m7DuVEyeYq pic.twitter.com/pPpbPPCuPf

Maybe we should change “THIS TIME IT COUNTS” to “THIS TIME IT COUNTS… UNLESS THERE’S A RETIRING STAR WHO WE WOULD REALLY RATHER HAVE A SENTIMENTAL MOMENT WE CAN REPLAY IN FIVE YEARS INSTEAD OF LEGITIMATELY DECIDING WHO SHOULD HAVE HOME FIELD ADVANTAGE IN THE WORLD SERIES.”

Fernandez actually walked Ortiz in what thankfully appeared to be a legit at-bat. Elsewhere, there was this bit of intensity and passion.

The MLB All-Star Game can be an exhibition that’s supposed to be fun, where the players don’t take themselves too seriously and everyone can have a good time. If it wants to be the NBA All-Star Game, that’s perfectly fine. Go out there and serve up fastballs and noogie people sliding into second all you want. But it can’t be that at the same time it decides something truly meaningful.

Here’s a rule that makes absolutely no sense — so much so that one of the leading voices on this issue is Dick Vitale. As far back as 2004, Dick Vitale said this in a USA Today article about the possession arrow in college basketball:

“It’s a rule that really penalizes a great defensive effort. You can make a terrific defensive play like last year in the Mississippi State game with Kentucky. Late in the game Mississippi State forces the jump ball — but oh, wow, we’ve got to look at the arrow. Alternate possession goes to Kentucky, and they score the goal in the last second to win the game. Bottom line is you’ve got to reward people that do a great job. If you make a great defensive effort, you should not be penalized.”

And I know this will come as a shock to you, but did you know why the possession arrow was created in 1981? It was largely implemented because NCAA referees couldn’t do it right. Bad refereeing negatively impacting college basketball? Who would’ve thunk it! Via the New York Times in 2006:

“The reason that the N.C.A.A. eliminated the jump ball from everything but the beginning of the game and the start of overtime was mostly because of officiating. Coaches bemoaned poor tosses and unevenly governed rules about the movement of players around the circle.

‘If you’ve seen a lot of basketball, you know — there’s probably 10 guys in the country who can throw it up well,’ said [Jim] Rosborough, the Arizona associate head coach.”

The fact that alternating possession hasn’t yet negatively affected an NCAA Tournament game is surely just a matter a time. Then the NCAA will meet it with a collective Joey Bosa shrug.

Got fined for honoring my Dad who bravely fought cancer on my eye black. #Nevergiveup #CancerSucks pic.twitter.com/RTx988ijG9

This cuts across a few different sports. Why do baseball managers continue to wear the same uniforms their players wear? How about the NFL’s uniform policies fining players like it’s going out of style? Remember when Cam Heyward was fined for honoring his late father? Or when DeAngelo Williams was fined for supporting breast cancer efforts outside of the league’s exclusive window? Or when Brandon Marshall was fined for wearing green shoes in honor of National Mental Health Awareness?

Those are just three of the most notable examples from a league that has fined players for all sorts of meaningless nonconformity to an arcane policy. And now, we will soon live in a world with sponsors on NBA uniforms. Get ready for that big old Fathead sticker on the new Cavs jerseys! Like most of these rules, when it comes to uniforms, common sense goes a long way.

Sure, teams like Iceland, Wales, and Northern Ireland were fantastic stories of interest at this year’s European Championships. However, as folks like Ian Darke have said, Euro 2016 was the worst major tournament in almost three decades. And yes, Portugal did deserve to win the tournament under the rules set at the outset. However, the vast majority of the matches were unwatchable, especially in the convoluted group stage.  Before the tournament, it was well known that three draws would pretty much guarantee a knockout round place.

That’s exactly what Portugal did, finishing third in their group and then getting hot/lucky at the right time and winning it all in the knockout rounds.  Portugal finished behind Iceland and Hungary in their group.  Nothing says the thrill of victory and the agony of defeat like rewarding complete and total mediocrity.

In any other incarnation of the tournament Portugal would have been eliminated after the group stage.  This year, because four of the six third place teams advanced to the knockout round, they’re lifting the trophy.

5. Shootouts deciding any sporting event, ever

Is there anything more unsatisfactory than a shootout? The last time we checked, basketball games weren’t decided by a free throw shooting contest and football games weren’t decided by a field goal kicking contest. So, why does the NHL still allow shootouts to decide games that aren’t settled by a five-minute OT in the regular season? And worst of all, why does soccer allow shootouts to seemingly decide every major tournament? In this age of cautious soccer and playing not to lose, the following major tournaments have had games decided by the lethal lottery of penalty kicks.

That is far too many championships being decided by sport’s ultimate gimmick. At least the NHL has the sense to try 3-on-3 OT to reduce the number of shootouts in the regular season and remove shootouts once the playoffs begin. Can’t soccer come up with something to decide the sport’s most important games in a more authentic way?

The famous phrase “I know it when I see it” was coined by Supreme Court Justice Potter Stewart to describe the recognition of obscene material. If that simple turn of phrase is good enough for a Supreme Court Justice, why can it not apply to the most fundamental event in football: the catching of a forward pass.

Things have gotten so bad with the mystery of the catch, the NFL has a handy video on their website to walk fans through the nuance of catching the ball. The NFL could show the Dez Bryant or Calvin Johnson “catches” to folks from other countries, other galaxies, other alien races, and they would quickly understand those plays are catches.

Now, the catch rule has been governed to such an extreme that one of the most fundamental aspects of the sport is constantly under a cloud of ambiguity. When you have to try to add more words and complications to try to actually simplify what a catch is, you’ve lost the plot entirely. If the NFL rulebook got rid of Article 3 and Rule 8 and just said “I know when I see it” fans, players, and refs would all be in a better place.