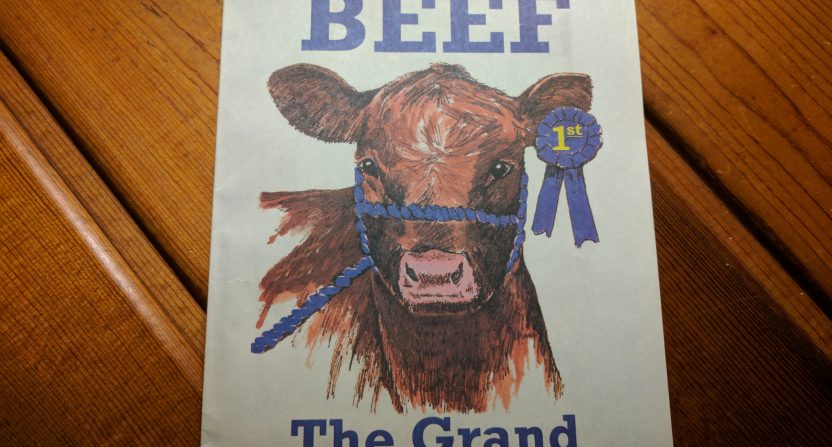 When you grow up in rural Indiana, you take at least one field trip per year to a farm.

Sometimes they even bring the farm to you, as was the case last week for an acquaintance’s kids.

They told me all about their day, and showed me the materials they were given, which may very well have been the same things I got when I was a kid growing up in North Webster. And my god, are they something.

Let’s take a stroll together through BEEF: The Grand Prize Winner!, shall we? 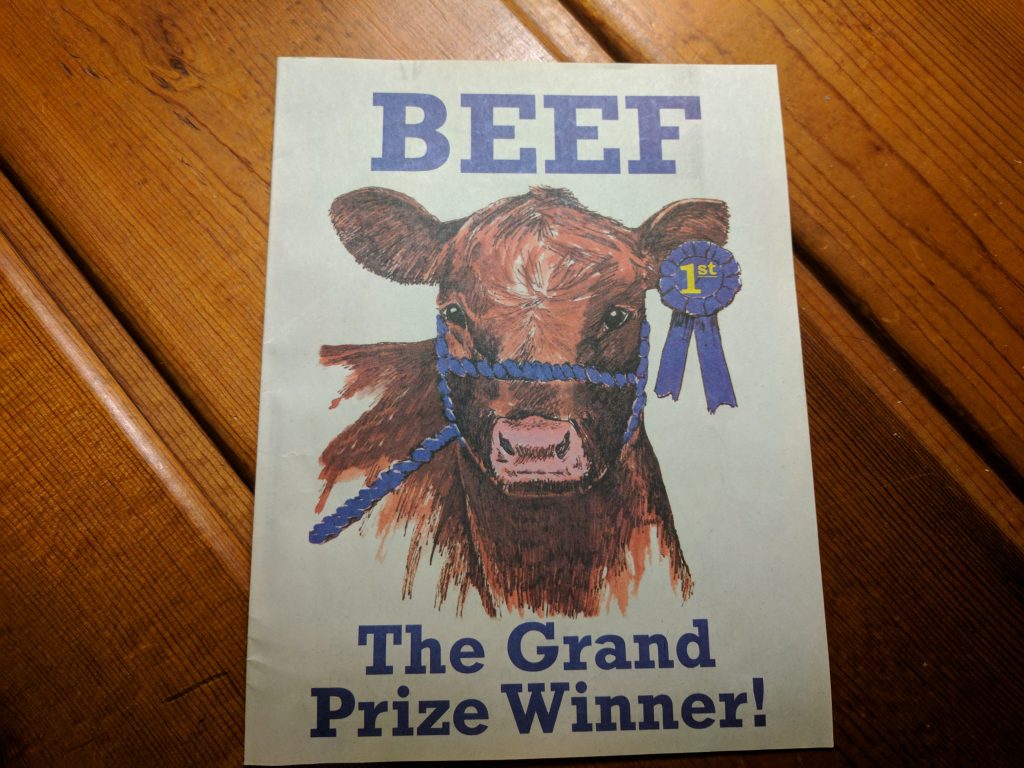 Okay, so you have a cow of some kind (I never paid much attention to the types, this one appears to be brown), and not just any cow, but a prize-winning cow! The pamphlet shouts this at us. This is one good cow.

Also the cow is being led around by a very crudely drawn halter, and looks quite miserable, but we’ll let that slide.

Let’s open the pamphlet, which, again, is what thousands of young children do all across Indiana. 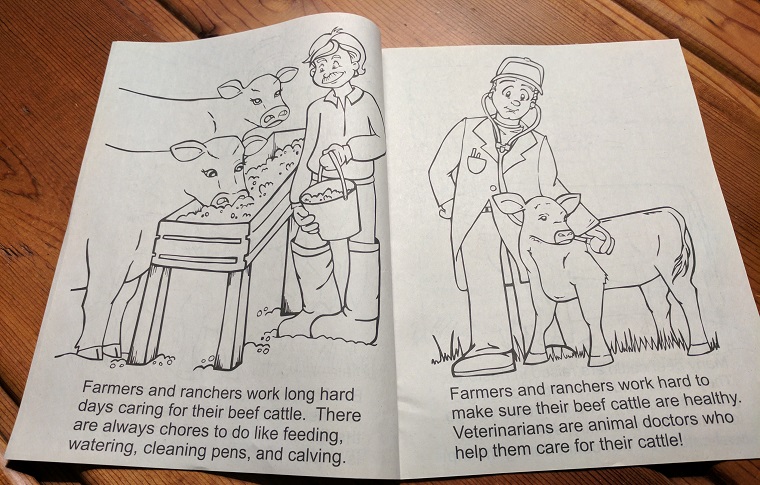 A rosy picture indeed! These cows look downright happy. They’re standing free, with plenty of open space, gorging themselves with pleasant expressions, being given proper care from an actual vet instead of just getting pumped full of indiscriminately applied antibiotics.

But sure, maybe a cartoon coloring book pamphlet isn’t the best place to educate kids on the realities (and horrors) of modern factory farming. That’s probably it, and not that the Indiana Beef Council is perhaps not the most unbiased organization to be producing these materials. 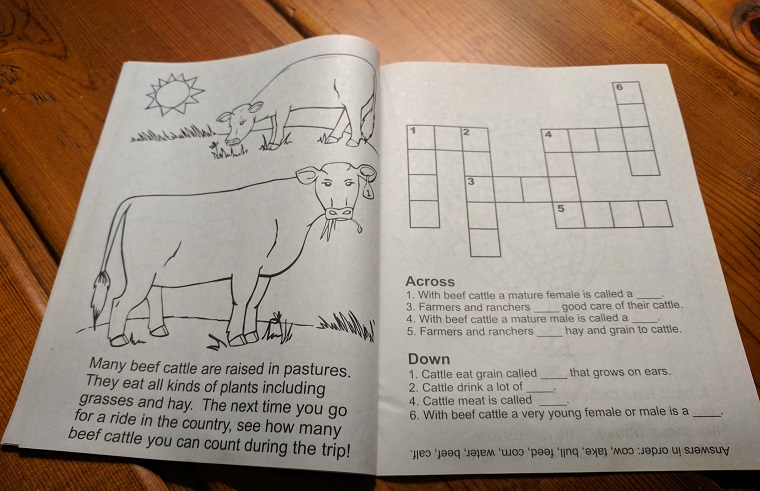 We get our first subtle nod to reality, with “many” beef cattle being raised in pastures. This is clever, since technically it’s probably true, in a sense. But it’s still not the most accurate depiction. Also that’s a very low sun for Indiana, and there are more hills in that field than I’m generally accustomed to.

Also, as to the crossword, I guess the kids learned those terms during the coinciding presentation? Because they’re not really present throughout the booklet. And the same-page upside-down answer key is a nice throwback, huh?

(It’s not quite as good as my high school math textbooks that had answers to the odd-numbered problems in the back. Those were great, especially when a teacher would forget about that and assign mostly odd problems. Related, I was never that great at advanced level math. I also hold multiple financial licenses, so that should be comforting to all of you.)

But so far, this is fine! Light-hearted look at what it means to raise cows, the kind treatment they receive, their happy lives. It’s a paradise. Let’s turn the page, and… 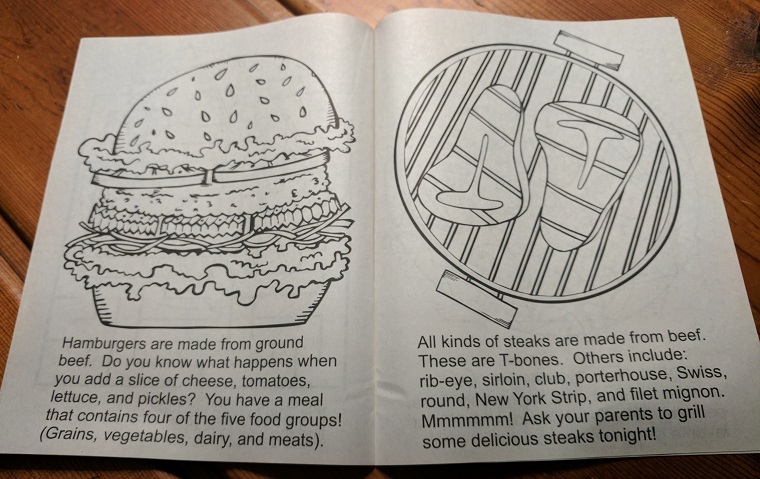 Good heavens! They’re glossing over quite a bit here, aren’t they? Are kids just supposed to make that inference? At the presentation, did they cover this by asking if anyone in the audience had seen No Country for Old Men?

Let’s also note that they’re advertising a giant cheeseburger as being a well-rounded meal (no one loves Five Guys more than I do, but even I wouldn’t try to pull that one off), as well as how long that “Mmmmmm!” is on the steak page. You’re talking about those happy cows!

At least it can’t get worse, right? 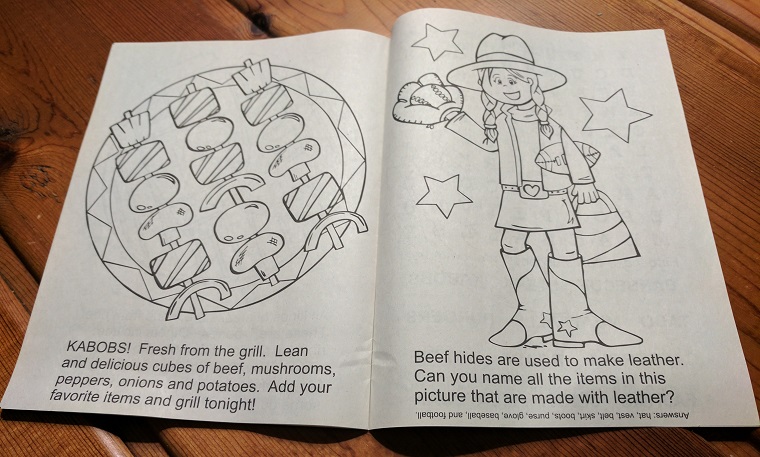 What the hell is this? First of all, they go burgers, steaks, and then jump all the way to kabobs? Second of all, they squeeze in a page on leather products?

And as to that activity on the right, what girl leaves the house with a leather hat, vest, and skirt on? Leather hats? Seriously?

Did they cover the tanning process too, at some point? How in the world are these kids sleeping at night?

It’s not so much that the coloring/activity book and pamphlet covers some darker stuff, it’s that it tries to paint everything in such a cheery tone while doing so, even after we hit the (thankfully unseen though otherwise literal) killing floor.

It actually could have been worse. Here’s the other booklet they received, which is not the work of the Indiana Beef Council: 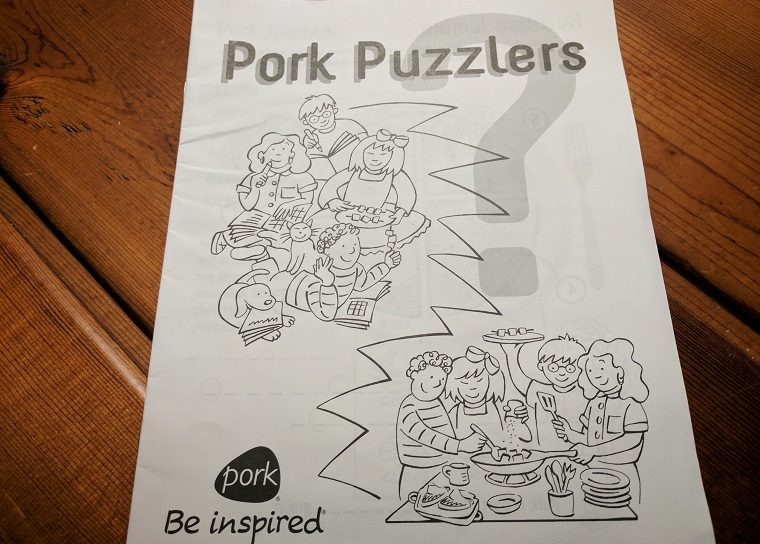