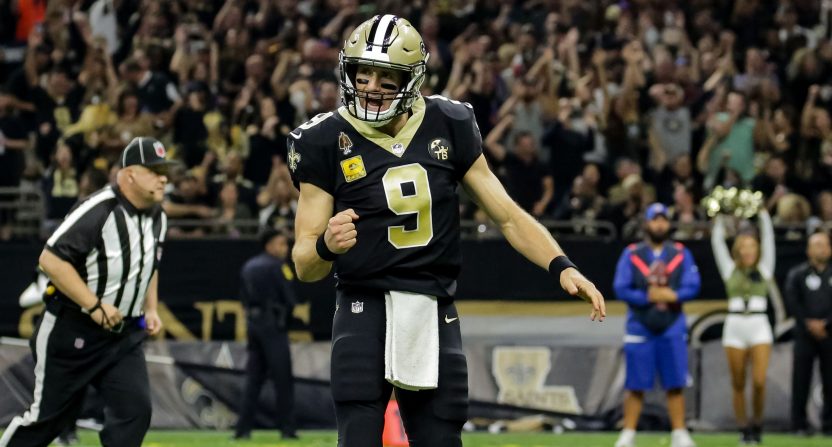 This year should be the year that New Orleans Saints’ QB Drew Brees finally wins his first league MVP trophy. With the Saints at 10-2 and Brees leading a number of passing categories, he’s the current favorite in a tight race with Chiefs QB Patrick Mahomes, with Chargers QB Philip Rivers not too far behind. Brees has done it all with the Saints, rewriting the record books and winning a Super Bowl along the way. But playing alongside other greats like Manning, Brady, Favre, and Rodgers has meant that Brees has been on the outside looking in when it comes to the game’s top honor at the end of the season.

Brees’ plight got us thinking about the other athletes who may have put together Hall of Fame careers but have never been able to win an MVP award. Some of these names across the four major pro sports (NFL, MLB, NBA, NHL) may very well surprise you among active players. But keep in mind luminaries and all-time greats like Jerry Rice and Jerry West somehow never won an MVP award either.

There are quite a few players who have put up impressive numbers over lengthy careers in the NHL like Patrick Marleau and Ilya Kovalchuk, but Giroux makes the list because of his close calls with winning the Hart Trophy. The longtime Flyers goalscorer has three Top 5 finishes and is a 5-time All-Star yet he’s never won an MVP during his 12 years in Philly.

Paul is one of the most accomplished point guards of his era, or any era for that matter. He’s a 9-time All-Star and has been named to the All-NBA First Team four times. In spite of leading the Hornets, Clippers, and Rockets deep into the playoffs though, Paul has never been honored with an MVP award. He did finish second in 2008 with the New Orleans Hornets and third in 2012 with the Los Angeles Clippers. However, it’s hard to hold it against Paul given that he finished behind Kobe Bryant and LeBron James those two seasons.

It’s amazing just how underrated and undervalued Philip Rivers will be when he decides to retire. Unfortunately for his personal legacy, the Chargers have never appeared in a Super Bowl with him at quarterback. And in spite of his eye-popping numbers, he’s never been considered among the best in the game at his position with the likes of Favre, Brady, Rodgers, Manning, and Brees in the way. In fact, were it not for Brees this season, Rivers may be the MVP frontrunner with career highs in completion percentage and QB rating this year so far. The numbers alone will build a strong case for Canton as he’s already a Top 10 all-time quarterback in passing yards, touchdowns, completions, and QB Rating.

The Mariners star has built up quite the impressive career over the last 14 years and is certainly in Hall of Fame discussions, although his 80-game suspension earlier this year may complicate matters there some day. However, there’s no disputing the numbers. Cano is a 7-time All-Star between his time with the Yankees and Mariners. And he showed a remarkable consistency as one of the game’s best players through the 2010s, finishing in the Top 8 in MVP voting in an incredible six out of seven years.

The heart and soul of the Blackhawks dynasty and a 4-time All Star, it may be surprising to know that Toews only has one finish in the Top 5 for the Hart Trophy, coming back in 2013. However, Toews did win the Conn Smythe trophy for Stanley Cup Playoffs MVP at the end of the 2009-2010 season when the Blackhawks won the first of three Stanley Cups during their dynasty run.

Unfortunately for Carmelo Anthony, he’s not exactly going out on top. After a stellar career with 10 All-Star Game appearances and a career average of 24.0 PPG, Melo’s last couple years may have soured his legacy for some people. He never led the Knicks to contention, sputtered out after a year in Oklahoma City, and then suffered through a disastrous experiment gone wrong in Houston. If anything, Melo will always suffer from being compared to LeBron James ever since they came into the league together in 2003. He wasn’t LeBron, but he’s still going to go down as one of the best pure scorers of his generation.

It’s impossible to separate these two quarterbacks given what they’ve accomplished in the NFL. Most importantly, both of them have won two Super Bowl championships. Eli has the edge in that he was named MVP in both of those games, but Roethlisberger has the edge in Pro Bowl appearances 6-4. They also remarkably have the same number of touchdowns with 352 in their career. Like Rivers, they never would be considered at the very top of the quarterback heap in a very quarterback-friendly era. However, their playoff performances will make them hard to ignore when Canton comes calling.

Beltre can’t officially make the list since he literally just retired from Major League Baseball after a stellar 21 year career in the big leagues. But he certainly deserves a mention because of his excellence and longevity over a career that just concluded. Although he was only named to four All-Star Games, Beltre finished in the Top 10 in MVP voting six times. His 3,166 career hits, 477 home runs, and 5 gold gloves make him a surefire Hall of Famer. Were he still active, he’d belong near the top of this list.

Dwyane Wade has won it all – three NBA titles, an Olympic gold medal, Finals MVP, All-Star MVP, First Team All-NBA – except being named the league’s Most Valuable Player. It doesn’t seem right looking back because Wade was so dominant in leading the Heat to their first title in 2006 before LeBron James took his talents to South Beach. Believe it or not, Wade finished sixth that year as Steve Nash won. Wade is on the list of the greatest two-guards to ever play in the NBA, but surprisingly enough he never really came all that close to winning league MVP honors.

The fact that Brees has never won an MVP is a crime against humanity that should hopefully be corrected this year. Brees is well on his way to rewriting the record books and claiming every meaningful career passing mark in the NFL for his own, already setting a new record for passing yards earlier this year. But lest you think there should be some kind of lifetime achievement aspect for Brees, he’s also put up some of the very best single seasons in NFL history by a quarterback. Brees has more 5,000 yard seasons with the Saints than any other quarterback in NFL history combined. He also holds three of the top four seasons all-time in completion percentage. In 2009 he led the Saints to the Super Bowl and in 2011 the Saints offense set a record for total yards that still stands.

This year looks to finally be the year for Brees, though. The Saints are one of the best teams in football at 10-2 and Brees is projected to break Aaron Rodgers’ record for QB rating in a single season at 123.2. He’s also projected to smash his own completion percentage record at 75.5%. Combine those numbers with a 30-3 touchdown to interception ratio and Brees is no doubt the frontrunner for league MVP honors. And after what may be the best quarterbacking career in NFL history, it’s long overdue.