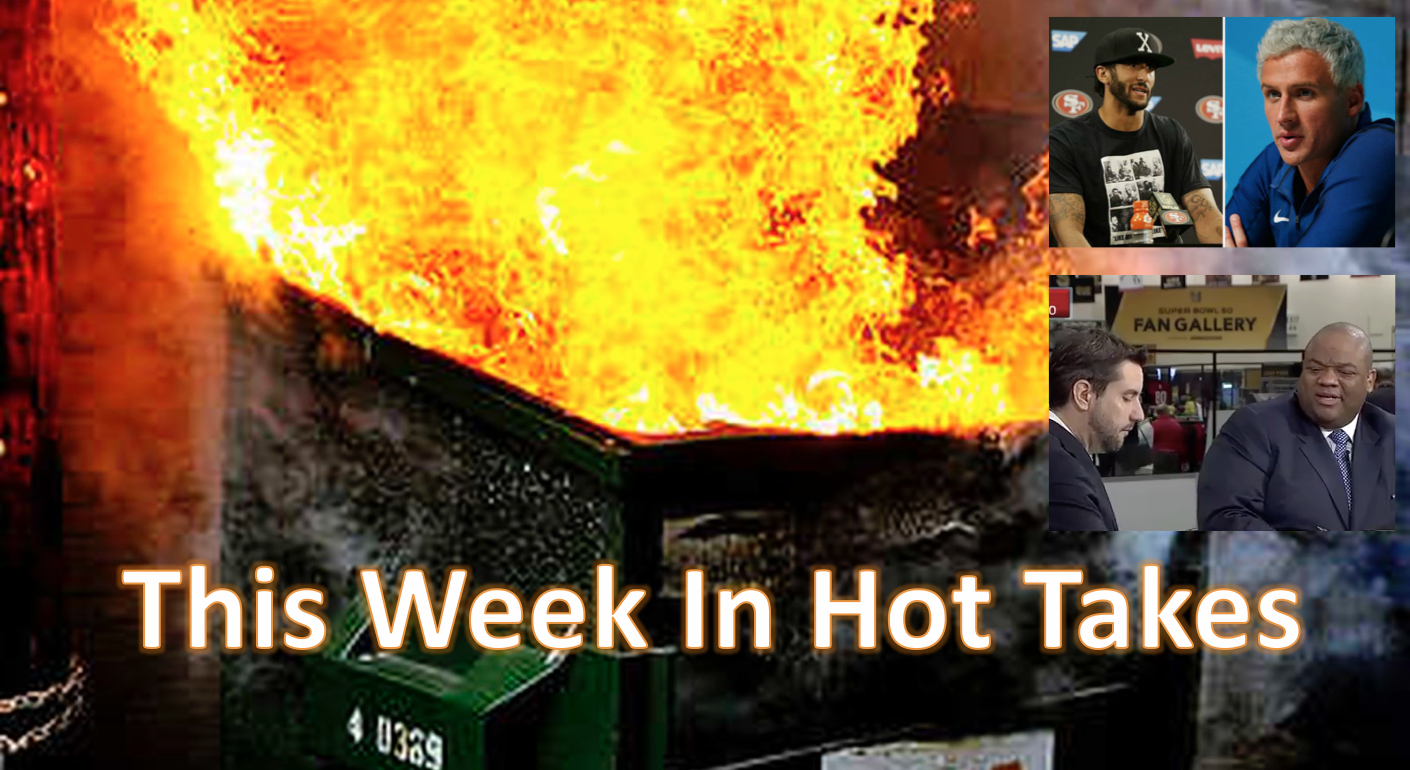 In a world that has embraced debate, there are many hot sports takes out there in any given week, and they’ve been termed “one of America’s greatest exports.” But which takes can stand out in that crowded environment? And which personalities consistently bring the most heat? That’s what we’ll track with a new Awful Announcing feature, This Week In Hot Takes, counting down from the fifth-hottest to the hottest. We’ll be keeping an ongoing leaderboard where we’ll eventually crown a king or queen of Hot Takes.

5. Dan Wolken thinks Les Miles should quit for his defense of Josh Boutte:

If Les isn’t capable of saying the kid got frustrated, lost his cool and made a dirty play, then just quit the business altogether.

Wolken, a college football writer for USA TODAY, has been known for plenty of strong stances in the past, but this one (and the rest of the tweets he’s unleashed this week over LSU guard Boutte’s after-the-whistle hit on Wisconsin’s D’Cota Dixon) stands out. Criticizing Les Miles’ comments and the duration of the suspension here is absolutely reasonable, but saying that’s not an “acceptable answer” is less so (who determines “acceptable”?), and suggesting a coach should quit his job because he didn’t say what you wanted him to say is pretty high on the media arrogance scale, especially when we’re talking about Miles’ reaction to an on-field hit rather than an off-field scandal.

Miles said Boutte “made a mistake” and suspended him for a game,  while Dixon himself has said “I wish he wasn’t suspended, in all honesty, and I wish people wouldn’t bash him so much in the media.” Disagreeing with Miles’ level of punishment for Boutte or his defense of Boutte’s actions is totally fair, as is calling for more severe punishment for Boutte, but calling for a coach to resign because he didn’t give the answer you wanted is pretty fiery.

4. Don Cherry on John Tortorella’s threat to bench anthem protesters: “This is a very unpopular stance with our left wing media.”

CBC hockey commentator Cherry is one of many people somehow viewing Colin Kaepernick’s “so very wrong” protest as an attack on the military (despite, you know, Kaepernick saying it’s not about them, plus all the military people who support him), and his support for Tortorella’s benching plans isn’t unexpected, but it’s the blaming it on the “left wing media” that’s particularly hot. What, is Luc Robitaille a media figure now? This is a common theme for Cherry, who somehow found a way to say the “All Lives Matter” anthem protest made “left wing weirdos” happy, but it’s factually incorrect, especially when you read the below entry on who’s delivering the harshest Tortorella criticism.

3. Stephen A. Smith thinks Tortorella should be fired for his “un-American stance”:

ESPN’s First Take is Stephen A.’s show now, and he’s demonstrating a commitment to maintaining its level of hot-takery. So, Colin Kaepernick speaking his mind is fine, but Tortorella speaking his mind (which is all he’s actually done so far) is a fireable offense? There are plenty of ways to go after Tortorella here, but Stephen A. decided to dial up the rhetoric to its top level. Also, calling that an “un-American stance” is a pretty hot take in its own right, especially given how many have lobbed that label at Kaepernick. Maybe we can fill a whole section of this piece with takes on what is and isn’t American.

2. Clay Travis: Ryan Lochte is “a victim,” “There’s a huge percentage of guys out there in the media who want white guys behaving badly to be a huge story.”

Travis, the newly-minted Fox Sports Radio morning host, has wasted no time bringing the takes. This time around, he’s suggesting that Lochte’s suspension is the result of a media conspiracy to punish white athletes, that similar actions by a black athlete would have been completely supported, and that Lochte’s lost endorsements make him “a victim.” There’s absolutely discussion to be had about the severity of that suspension, especially considering it’s less than Michael Phelps got for a DUI, but suggesting it’s part of a media plot to tear down white athletes is a pretty hot take.

1. Jason Whitlock: Kaepernick’s protest is “the new version of the Dab”

"Kaepernick hasn't created a movement he's created a fad. This protest is the new version of the Dab" @WhitlockJason pic.twitter.com/JPs5IT25wQ

Whitlock has always been known for his hot social takes, and we should get even more opportunity to hear them now he has a daily FS1 show with Colin Cowherd. Comparing a protest about racial oppression to a touchdown celebration? That’s a scorching hot take indeed.

Tune in next week for more This Week In Hot Takes. You can send submissions to me here.