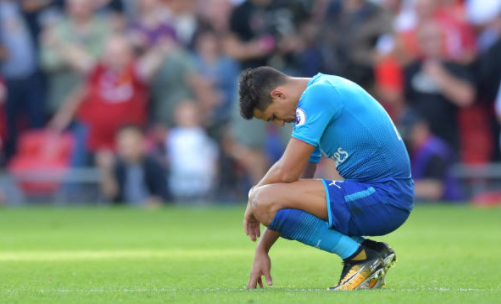 Liverpool thumped Arsenal, 4-0, last Sunday, reawakening the not-long-dormant angst of Gunners fans. The team could not even make it to the September international break before plunging straight back to the lowest depths of the late Arsene Wenger years ennui.

Arsenal presents an interesting case study. On paper, it’s a great club to follow. The team tries to play attractive soccer. The breadth of consistency is impressive. Arsenal finished in the Premier League top four for 20 straight seasons. They missed out last year by a point on the final day. They have three recent FA Cup triumphs. For comparison, their rival Tottenham has won one trophy this century, the less prestigious League Cup in 2008.

It’s a lot of success. The team is consistently relevant. But it’s often a profound disappointment, as the team never comes through when it counts. Arsenal’s last league title came in 2004. The team has finished within five points of the league winners once since, in 2008. The Gunners qualified for the Champions League every season, but did not do much when they were there. Since reaching the final in 2006, Arsenal has had just one semifinal appearance. Before being missing out this season, the Gunners had a seven-year streak of being eliminated in the first knockout round.

To put Arsenal into perspective for American sports fans, here is the “Arsenal” for every major sports league.

NFL [Green Bay Packers]
The Packers, like Arsenal, have been all about internal culture. They build from within rather than make flashy free agent signings (the Arsenal way, at least in theory). Green Bay, with back-to-back Hall of Fame quarterbacks, has been consistent by NFL standards. The Packers have reached the playoffs 19 times in the past 24 seasons. They are tied with the Patriots for a streak of eight straight postseason appearances. Green Bay has not come up empty, with two Super Bowl wins. But they never compiled an extended dynasty. The Packers wouldn’t be the true “Arsenal” without the knife twisting. Remember the five overtime playoff losses since 2003.

College Football [Oklahoma Sooners]
Like Arsene Wenger, Bob Stoops had a hot start at Oklahoma. He won a national title during his second season in 2000. He finished ranked sixth or higher each of the next four seasons. His teams were almost relentlessly competent afterward. Oklahoma had 14 top 20 finishes in 18 seasons under Stoops. He never won fewer than eight games after his first year (7-5). Oklahoma was relevant but never quite got rolling during the later part of the Stoops era, with persistent questioning about whether a change of scenery would be best for both parties.

NBA [1970s/80s Philadelphia 76ers]
Like Arsenal, the 76ers were there for much of the late 1970s and 1980s. The Sixers went to the playoffs 15 times in 16 years from 1976 to 1991. They had a peak stretch from 1979 to 1983 of four straight conference finals appearances and won the title in 1983. They had great players such as Julius Erving and Moses Malone. They finished third or better in the Eastern Conference for 10 straight seasons. They were the team during that era that didn’t pull off multiple titles like the Lakers, Celtics, Pistons, or Bulls.

MLB [Atlanta Braves – Bobby Cox Era]
The Braves roared through the 1990s and early 2000s with three Cy Young Award winners, reaching the playoffs 14 straight seasons and winning 100-plus games six times. Atlanta went to the World Series in 1991 and 1992 and won one in 1995. That was their only series win. Malaise set in over the final 11 seasons of the Cox era. The Braves got past the division series once (2001) and never reached another World Series.

College Basketball [Michigan State Spartans]
The Spartans had the great run at the beginning of Tom Izzo’s tenure with three straight Final Four trips and the 2000 national title. Michigan State has been an effective basketball program every year since and made some excellent NCAA Tournament runs. They punched above their weight without the top recruits that land at Kentucky or Duke. Still, MSU has just three Big Ten regular season titles in the 16 years since that 1999-01 stretch.

NHL [Detroit Red Wings]
The Red Wings just ended their 25-year playoff streak last season. Like Arsenal, the Wings rode to the top in the late 1990s and early 2000s, winning Stanley Cups in 1997, 1998, and 2002. Like Arsenal, however, their competitive advantage eroded. Detroit lifted another Cup in 2008, but did not get past the second round of the playoffs after 2009. The last three years of “the streak” saw three straight first round exits.