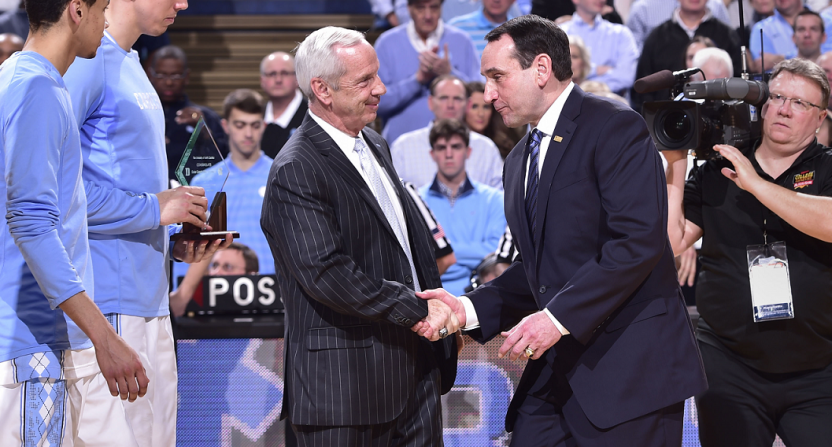 News broke earlier this week that Tim Duncan has been hired as a Spurs assistant. Is this an indication that this will be Popovich’s final season? He signed a three-year contract extension in April, but when you’re a septuagenarian, you never know what’s going to happen.

Popovich is the closest thing to Bill Belichick in professional sports: winning championships over multiple decades. He took over the Spurs at the right time. In 1996-97, they already had David Robinson and drafted Tim Duncan in 1997. This started one of the greatest runs in NBA history. Popovich is responsible for this impressive stat: since 1997-98, San Antonio has spent a grand total of 65 days with a losing record. The next closest team is the Houston Rockets with 1,007 days.

Before Popovich, the Spurs didn’t have much in terms of history. But Popovich built them into one of the NBA’s model franchises. It also helped to have an unprecedented run of all-time great players: Robinson, Duncan and Kawhi Leonard. While being forced to trade Leonard is Popovich’s greatest failure, it’s worth noting that Popovich helped him develop into the star he is today. Whoever follows him will be in impossible situation. San Antonio is a small market that doesn’t appeal to many free agents.

Of all the fan bases, longtime North Carolina enthusiasts probably have a better perspective on this. They know from experience how difficult it is to replace a legend. Dean Smith strategically retired right before the start of the 1997-98 season so that longtime assistant Bill Guthridge would get the job. Guthridge coached three seasons before stepping down in 2000. The first time North Carolina tried to lure Roy Williams from Kansas, he said no. That led to the ill-fated Matt Doherty experience which basically ended with his players revolting against him. After Doherty was forced out, North Carolina asked Roy Williams again. This time he said yes.

Williams has been everything North Carolina fans hoped for. He knew the culture having been a former assistant in Chapel Hill. Plus, after working at Kansas, he was used to a demanding fan base. Williams has been just as good as Smith. When he retires, North Carolina probably choose someone with Tar Heel ties. (Unless it lands Billy Donovan). Whoever they choose is going to have to win at the Williams/Smith level. That’s the standard.

National championships: 6 (5 at Alabama, 1 at LSU)

Alabama won championships before Nick Saban. It will win championships after Nick Saban. However, the transition from Saban will be a bumpy ride. Saban learned quickly that it’s easier to be successful in college football rather than the NFL. He has all the advantages. There isn’t a salary cap, no free agency, or a draft. He basically out-recruits everyone. He also can spend whatever he wants on coaches and facilities. When you combine his access to the best talent with his coaching acumen, you get what the Crimson Tide have become: a juggernaut. Saban is always in the national championship picture. And that’s not easy considering only four schools make the playoffs.

But no one stays on top forever in college sports. Eventually Saban will retire and the next guy is going to have to live up to the greatest legacy in college football. This decade, Alabama has lost only 13 games and just four over past four seasons. It has played in four straight national championships games. The new coach might benefit from an expanded playoff field in the future. But just surviving the SEC won’t be easy.

Perhaps one day, Bill Belichick will reveal the secrets behind his success. How, in a league that legislates parity, he has been able to consistently win. How, in a league that chews up young bodies, he has a quarterback who seemingly doesn’t age. Belichick is either smarter than everyone else or most of his peers are woefully incompetent. (Have you seen the rest of the AFC East?).

Belichick is on the Mount Rushmore of NFL coaches. He has created a mystique by winning with a quarterback who should be well past his expiration date and surviving multiple cheating scandals (SpyGate, DeflateGate). The bottom line: his six Super Bowl championships will likely never be topped. It’s too difficult in the modern age to sustain that kind of success if your name’s not Belichick. No other active NFL coach has won more than one Super Bowl. What makes Belichick’s run even more than confusing? His protégés have been lousy. Houston Texans coach Bill O’Brien is the best, and he won one playoff game in five seasons. Patriots offensive coordinator Josh McDaniels will likely take over for Belichick, but he was 11-17 at Denver. Good luck with that.

Oh boy. How do you replace the irreplaceable Coach K? You can’t. Remember how difficult it was to fill Dean Smith’s shoes? This probably will be twice as hard. Fun fact: Krzyzewski didn’t make his first NCAA tournament until his fourth season at Duke in 1983-84. He had losing seasons in two of his first three years in Durham. Patience doesn’t exist anymore in college sports. At the bluebloods (Duke, North Carolina, Kansas and Kentucky), you’re expected to win big immediately.

Krzyzewski rewarded Duke for its patience by building the greatest basketball dynasty since the UCLA teams of the 1960s and 70s. Only John Wooden (10) has won more national championships. But Krzyzewski has done it in an age with more roster turnover and a deeper NCAA tournament field.

You can make an argument that Krzyzewski is the best college basketball of all-time. Whoever succeeds him simply won’t measure up. Duke could keep it in the family. The school could hire one of the usual suspects with Duke ties: Pittsburgh’s Jeff Capel, Arizona’s Bobby Hurley, Central Florida’s Johnny Dawkins, Harvard’s Tommy Amaker, Marquette’s Steve Wojciechowski, or Northwestern’s Chris Collins. Or maybe they’ll get lucky and Billy Donovan will want to return to college. But even for Donovan, who won two titles at Florida, this could be grueling.