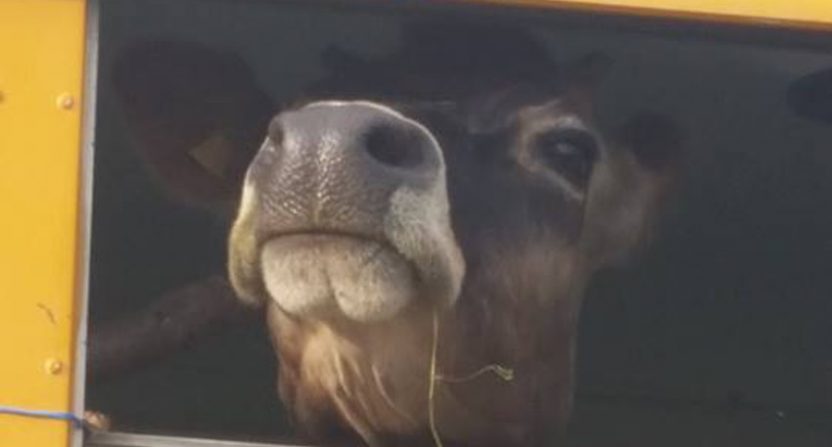 A California woman’s attempt to create a mobile petting zoo on a school bus put her in the hospital—but thanks to an assault from a bystander, not an attack from the animals.

The incident happened in Sebastopol, California (about an hour north of San Francisco), and it took place last weekend, but the Sebastopol police put the details on their Facebook account Thursday. That led to this CBS SF story Sunday, and it’s undoubtedly going to lead to many more pieces, given just how bizarre the situation was. The woman put two cows, a goat and three dogs on a school bus, parked it in town and said she wanted to operate a mobile petting zoo. That led to complaints from locals and the police responding. Let’s let the police tell the story of where it went from there:

Officers responded and made contact with the owner, looking for an explanation. The owner of the menagerie had a well-intentioned, but perhaps misguided plan to turn the ex-school bus into an educational petting zoo on wheels. The officers checked on the welfare of the animals. They were well taken care of and not in distress. However, inside a school bus on Morris Street was perhaps not the best place for them, especially since there is a city ordinance prohibiting the keeping of livestock within city limits (in most cases). It was clear the owner had bitten off more than she could chew, so to speak, in her new venture. She moved the bus to the Chevron station on Highway 12 and needed some assistance in figuring out what to do next.

As cows in a school bus are not something covered in great detail at the police academy, SPD Officer Murphy began to research what could and should be done with our livestock interlopers. However, in the meantime, unfortunately, a female subject who apparently did not share the owners enthusiasm for mobile petting zoos, assaulted the owner and sent her to the hospital with minor injuries. The two assailants were arrested and the owner, after being released from the hospital, decided it was best the animals had more room to roam free. Thanks to Officer Murphy’s efforts to reach out to the agricultural community, a pasture near Cloverdale was offered up for the animals in the meantime.

Full credit to that writer for the understated language used (“well-intentioned, but perhaps-misguided,” “inside a school bus on Morris Street was perhaps not the best place for them” and “a female subject who apparently did not share the owners enthusiasm”). That’s putting it lightly. The idea of just loading up a bus with a bunch of animals and parking it in town despite bylaws is quite out of the ordinary, and so is the idea of physically attacking someone for doing so.

Sebastopol is known for its quirkiness (a 2012 article in San Francisco’s 7X7 magazine described it by saying “had the Upper Haight not become such a theme park itself, you could easily  imagine it might look a lot like this Sonoma County town”), and for its mixture of urban and rural, so if this was going to happen, it happened in a logical location. It’s good to hear that the bus owner’s injuries were minor, though, and that the animals “have been moved to greener pastures.” That’s probably a better place for them than an old school bus.