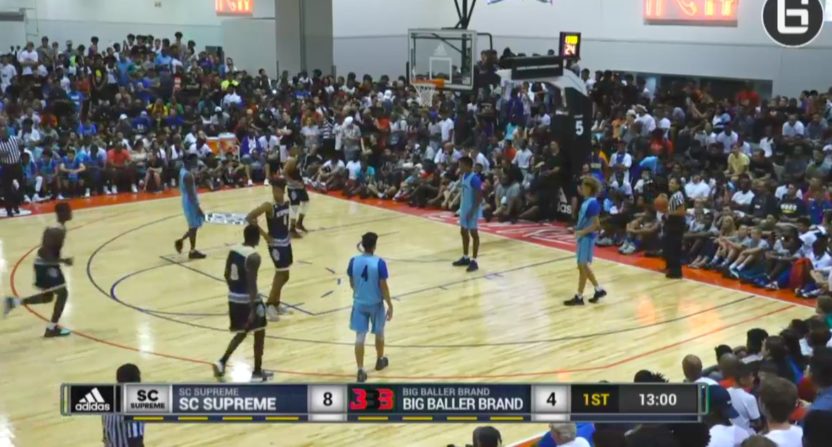 LaVar Ball will probably tell you a million people checked out a mid-summer AAU game just to watch him coach, but the real stars of the night were his son LaMelo Ball and Zion Williamson.

The exhibition AAU basketball game played in Las Vegas on Wednesday night was broadcast live on Facebook, and there was certainly an interested audience for the showcase event sponsored by Adidas and dubbed the Adidas Uprising Summer Championship. At least 80,000 Facebook users loaded up the live stream, and the gym was packed from wall to wall with spectators for the game, including some from the NBA like Andrew Wiggins. LeBron James would have been there too, but he chose to alter his plans once the crowd control concerns went overboard.

Can you blame LeBron? The scene was mad enough as it was. Adding LeBron to the mix would have created even more of a hassle for those trying to keep everything operating smoothly.

lmao look how many people they packed into melo vs. zion. fire marshals must have been like ¯_(ツ)_/¯ pic.twitter.com/lnuSr7FkT1

The interest in the game was incredibly high, as you can see. The crowd size did become an issue, however, and fire marshals and police had to go into crowd control mode to keep everything in order.

Zion Williamson is widely regarded to be the nation’s top basketball recruit. His team, SC Supreme, came out on top of the mega AAU matchup, 104-92. Williamson scored 31 points and he pulled down eight rebounds to put on quite the show. LaMelo Ball did his part to perform with 36 points and a ton of the wild long-range shots he is known for.

Say what you will about LaVar Ball’s antics and self-promotion, but there is no question there was a bit of an extra draw to this summer matchup in part because of the Big Baller Brand intrigue. Whether that is a positive for amateur basketball is fair to debate, but what is not to be forgotten is just how much of a hit this turned out to be on social media.

Can LaVar Ball get ANOTHER TECH? ? pic.twitter.com/DlyMQPzAyb

Could this be a start of AAU basketball getting more airtime in one way or another in the summer? Watching some of the top college recruits battle on the court is going to draw viewers in when the other options for sports entertainment are few and far between. This AAU matchup tipped off while the Gold Cup championship was ongoing and the only other real competition would have been regular-season baseball. With basketball gaining traction in the sports world, don’t be surprised if we see more AAU basketball games bringing in viewers on Facebook or Twitter in the future.