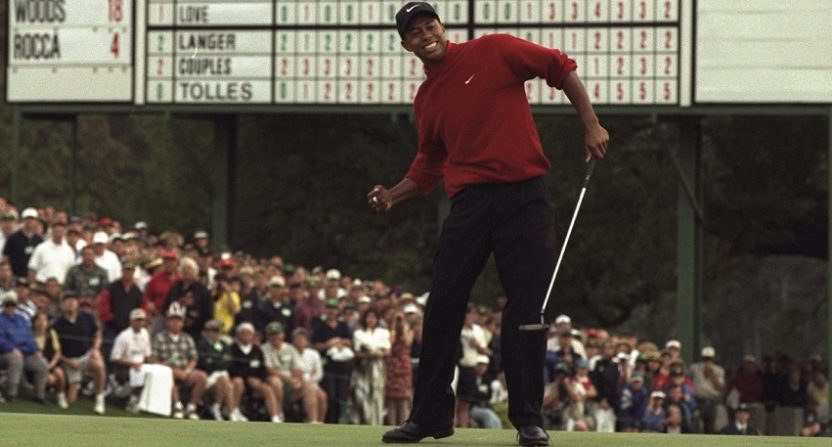 The Masters will begin Thursday without Tiger Woods for the third time in four years.

And, incredibly, it has been 1,454 days since Woods last finished in the Top 5 at a major championship, the 2013 Masters. In that timespan, five different golfers have ascended to Woods’ spot as the No. 1 golfer in the world, LeBron James returned to the Cleveland Cavaliers to lead them to a title, the Chicago Cubs won the World Series, and Donald Trump was elected President of the United States. It’s been a long time.

Woods’ fall from the top of the golfing world, and let’s face it, the top of the sports world, has been one of the most stunning athletic developments in a long time. And on the 20th anniversary of Woods’ first major triumph at Augusta, perhaps it’s his humanity and his current state of brokenness that makes his 1997 victory just that much more incredible.

As the 1997 Masters arrived and Woods was ready to make his major professional debut, it’s not like he was a rookie mystery taking everyone by surprise. He had been a child prodigy who appeared on national television in the 80s. In the 90s, he became the first golfer to win three straight US Amateur titles and also added an NCAA Championship at Stanford. After turning pro in 1996, all he did was win two events and the PGA Tour Rookie of the Year award, as well as cash in on some of the biggest endorsement deals ever seen from Nike and Titleist. He even was named Sports Illustrated‘s Sportsman of the Year in 1996.

Woods was hyped like no other golfer before. Given his talent, given the possibilities about how his mere presence could open so many doors for the sport, given what success at Augusta could mean after decades of segregation and exclusion, there was mountains of pressure, hype, and expectation on Woods’ shoulders.

And at Augusta in 1997, Woods took it all in, took it all on, and all he did was provide the most astonishing, revolutionary performance that the sport had ever seen.

Woods shot a 270 (-18) tournament score and won by 12 shots, both Masters tournament records. All the more amazing was the fact that he began the tournament with a 40 on the front nine, which was clearly done just to give the field a head start. Just have a look at the leaderboard to see what Woods did to his contemporaries over the four days. 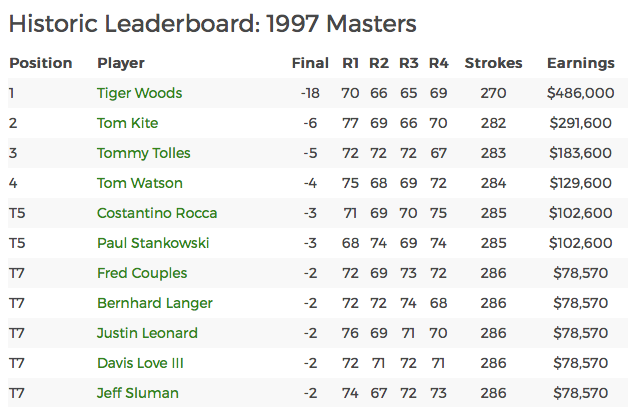 Woods turned the most iconic golf course in the world into his own personal pitch and putt, slicing and dicing it with a combination of power and precision never seen before. He was hitting wedge shots into Par 5’s and rewriting the way the course was meant to be played.

What made Woods’ 1997 victory so monumental was not the margin of victory or how many under par he was. It was the fact that nobody had ever seen the game played at the highest level with such ease.

The we’ve-never-seen-anything-like-this-before quality of Woods’ victory was not lost on his peers. Looking back, there’s a clear sense of bewilderment in these quotes from his competitors at the tournament over what they were witnessing.

So golf is trying to get used to the fact that the man who will rule the game for the next 20 years shaves twice a week and has been drinking legally for almost three months now. “He’s more dominant over the guys he’s playing against than I ever was over the ones I played against,” marveled no less an authority than Jack Nicklaus, whose 17-under Masters record of 271 had held up for 32 years. “He’s so long, he reduces the course to nothing. Absolutely nothing.”

Said Jesper Parnevik, who finished 19 shots back, “Unless they build Tiger tees about 50 yards back, he’s going to win the next 20 of these.” (Memo to former Masters winners: Get ready for a whole lot of Tuesday-night champions’ dinners you can supersize.)

That night there was this loopiness, this giddy sense, even among the players, of needing to laugh in the face of something you never thought you’d see. A 21-year-old in his first major as a pro was about to obliterate every record, and it was almost too big a thought to be thunk. “I might have a chance,” said Paul Stankowski, who trailed by 10, “if I make five or six birdies in the first two or three holes.” After playing with Woods on Saturday, Montgomerie staggered in looking like a man who had seen a UFO. He plopped his weary meatiness into the interview chair and announced, blankly, “There is no chance. We’re all human beings here. There’s no chance humanly possible.”

The Masters website even has the final round broadcast from CBS archived on its website as a rare tribute to the tournament’s lasting historical significance.

Sometimes it’s cliche to say that certain players, certain moments, certain events change the game forever. Woods’ victory in 1997 and his dominance at the turn of the century did that quite literally because after he came on the scene, golf courses had to respond by “Tiger-Proofing” their tracks so that they wouldn’t be decimated in the same way Augusta National was in 1997.

Woods was ready to dominate the sport for the next 20 to 30 years. Every single record seemed to have his name etched into stone. The question was not if he would break Jack Nicklaus’ record of 18 majors and six green jackets, but by how much. That’s how great his 1997 victory was. And for over a decade, Woods delivered on every single account. This is a far from complete list of his records and achievements.

Nevertheless, what was more important than the stats and the record was the cultural impact that Woods had. Maybe only Jordan and Ali and Ruth have had such a singular effect on a sport like Woods. He was and is a cultural phenomenon. And the time the sport of golf spends thinking and hoping and wondering how they’ll ever get back to the heights it saw under Tiger Woods is pointless because there will never be another Tiger Woods and it’ll never happen that way again, at least not in any of our lifetimes.

Twenty years later, though, and Woods’ career is on life support after years of debilitating injuries following his infamous infidelity scandal. At this point, fans are just clamoring to see him stroll the fairways of Augusta National one more time to reminisce about what once was, not with any hope that Woods could actually contend and let alone win his fifth green jacket.

And it’s this realization, with Woods on the outside of the sport that he dominated for so long, that makes looking back 20 years at the 1997 Masters all the more incredible in hindsight.

Tiger Woods is human after all.

The unthinkable back in 1997 has happened. Tiger Woods has aged. Tiger Woods’ body has broken down. Tiger Woods has only (!!!) won 14 majors and in all likelihood will be stuck there forever. If you would have polled any golf fan after that 1997 Masters about where Woods would be in 2017, odds are the wide majority would say that he would be preparing to win his 10th green jacket or his 15th and not looking like his fifth was slipping out of sight forever.

But that shouldn’t diminish Woods’ accomplishments or what he did 20 years ago. If anything, his fallability should amplify those achievements because it was a human being who achieved all that. Not a robot. Not a genetically modified golfing cyborg perfected in a lab somewhere. It was a 21-year-old kid from Stanford who produced one of the most iconic and legendary performances of all-time. Who rewrote the history books. Who broke down walls and barriers. Who changed the game forever.