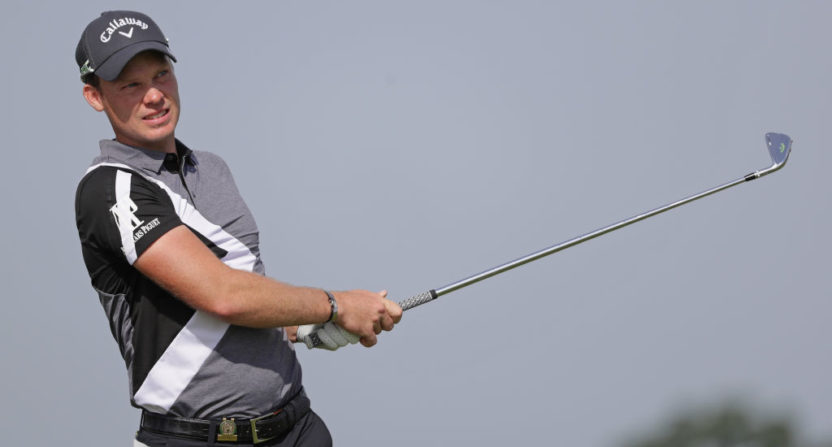 On the driving range following his Thursday 81, Danny Willett looked lost. Not in the metaphysical sense (although there was a bit of that too) but in the literal sense as he looked for a bag of balls to take out onto the spacious practice area at Erin Hills, two full greens with bunkers set up with a fairway in between. Golf’s equivalent of full-court basketball.

As you might expect, grabbing some practice balls works a bit differently at the U.S. Open than it does at your local course or driving range. There’s no wire-frame bucket, no kid sitting in a booth staring at his phone, no weirdly-loud coin-operated dispenser. Instead, there’s a ball distribution tent (helpfully labeled in blue block letters, as with pretty much every structure on the grounds), with a table and plenty of hunter green drawstring bags lying around.

Another difference, maybe the easiest to guess, is that these balls aren’t scuffed Pinnacles. Players are hitting half-to-full wedge shots into these practice greens, after all, and they want to practice with the type of ball they’ll be playing on the course, for obvious spin and feel purposes. Willett plays Callaway’s Chrome Soft, but the range staffers didn’t have any right at hand; one asked the other to go grab a bag.

“The red ones?” he asked, presumably meaning the number on the ball.

This interaction didn’t take long, but Willett, his caddy, and a manager or agent or coach stood idle under the stairway that players descend when crossing from the locker room (a tent helpfully labeled locker room) over a bridge and down to the range. There weren’t many media members assembled this late in the day, and few people in the grandstand behind the range as players did post-round work.

If you didn’t know Willett had posted a bad score, it wouldn’t have been easy to tell. He didn’t look more or less irritated than anyone on the range or putting green, with the exception of the struggling Billy Horschel, who would sit on the ground with his head between his knees for an extended period of time, looking like a kid in a self-imposed timeout. (Horschel shot 79 on Thursday and 78 on Friday to miss the cut.)

Willett just waited for the balls, and as one of the staffers returned, someone from his camp fielded a question from a reporter inquiring as to the state of Willett’s game; the response filled with platitudes about finding something that worked and building off of it tomorrow. Then Willett and company walked past, elusive green bag of balls in hand, venturing out onto the practice fairway while play was still going on the course, diligently working through that bag of Chrome Softs.

When Thursday play was finished, only one player shot a higher score than Willett’s 81. Only three players joined him in the 80s.

Danny Willett withdrew Friday morning before his round began.

Looking back at that Masters, it’s important to remember that while he wasn’t a household name at the time, Willett wasn’t viewed as a random, major champion, as I wrote:

(Willett) has built his ranking playing well in tournaments that American fans only see if they subscribe to the Golf Channel and suffer from insomnia. But his game is a consistent one; he hasn’t missed a cut since last July. He finished tied for 6th at last year’s British Open, and he made the cut at last year’s Masters, his first appearance.

This was not Trevor Immelman or Rich Beem or Todd Hamilton, players we watched win majors without knowing (though perhaps suspecting) that we were witnessing the peak of their career, with no more to follow. Danny Willett can play.

And, it should be said, that’s still almost certainly true. Danny Willett can play. But he hasn’t shown that lately. Since that Masters win, a few decent showings aside, Willett has gone through just about every problem a player can go through. He made the cut at all four majors in 2016, which isn’t a small feat, but didn’t sniff contention outside Augusta, and he hasn’t broken 70 in a major since that Masters either:

The last of those happened today.

Willett made the European Ryder Cup team, but his brother wrote a controversial piece mocking Americans for which Danny unfortunately had to answer all week, both to the press and to the rowdy Hazeltine crowd. He failed to win a point, going 0-3 for the event.

Earlier this spring, Willett’s longtime caddy Jonathan Smart quit mid-tournament after a yardage dispute on the course at Harbour Town. That’s just about a year after the pair had won the Masters together. It’s impossible to know everything, but from the outside, it’s hard to imagine a caddy quitting on a 30-year-old major winner (with five worldwide wins in total) unless things are really bad behind the scenes.

Willett didn’t play again until the Players, where he shot 79 on Thursday and was +4 through his first nine holes on Friday before withdrawing at the turn. After that, he made the cut at the BMW PGA on the European Tour, where he finished third last year, but he shot 76-73 on the weekend, finishing T58. Then three more weeks off, his opening 79 at Erin Hills, and another WD.

Whether or not the back is the main problem, it’s hard to deny that Willett is at a crossroads. If the injury is severe enough to be affecting his play to this degree, he probably shouldn’t be playing. But as a Masters winner, it’s not like he has much to lose by trying to work things out on the course; he could miss every cut for years before he was in danger of losing his card.

Still, watching him just take a bag of balls to the range, without knowing he was going to effectively take those balls and go home the next morning, it was a bit odd. From his demeanor it legitimately looked like nothing was wrong, which could mean that nothing felt wrong. But if everything feels fine and you still can’t break 80, that has to be terrifying for a pro.

No one wants to venture into the wilderness, and though some (like Henrik Stenson, and to a lesser degree Sergio Garcia, this year’s Masters champ) have fallen and returned to even greater heights, it has to be easier to hope it’s a back issue. That’s something tangible, that should eventually heal, and though it carries with it some major risks, it’s still an issue that you can fix, or try to fix. But if it’s not a back issue?

Well, that’s something else entirely, because you can’t fix a problem you can’t find. The unknown is where the monsters live.