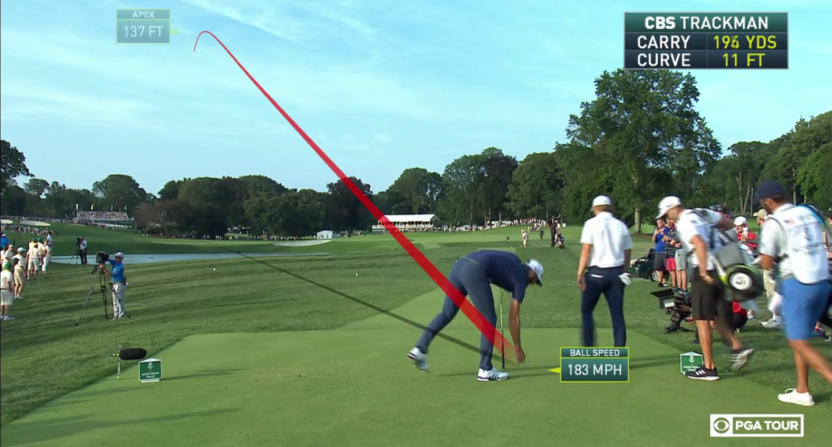 The Northern Trust kicked off the FedEx Cup playoffs from Glen Oaks Club on Long Island, and it was hard to ask for better drama to kick off golf’s underrated postseason.

That was thanks to the two-man duel down the stretch between two of modern golf’s biggest names, as Dustin Johnson and Jordan Spieth separated themselves from the pack on the back nine. They went to the 18th tee tied, and both men struggled approaching the green; Johnson’s drive drew a gnarly lie in the rough from which he was forced to lay up, while Spieth came close to shanking a 6-iron approach from the fairway.

Johnson’s third, a lob wedge from 88 yards, went long, leaving what looked like an impossible par putt. Spieth had this swinging lag from distance, though, which was by no means a guaranteed two-putt; fortunately for Spieth, he’s one of the great lag putters in history.

That’s perfect, and Spieth tapped in for his par. That put all the pressure on Johnson, who rarely seems to feel that pressure, a strength of his game likely stemming from being one of the most carefree athletes in modern sport:

That putt dropping meant both men returned to the 18th tee to start a sudden-death playoff. Spieth hit first off the tee, finding what looked to be the perfect spot in the fairway. Looked to be, that is, until Johnson stepped up and took dead aim directly over the water, attempting to amputate the hole above the dog leg:

Good lord that’s ridiculous. It was the longest drive of the week; after the round, Johnson would note that the wind had switched to the point that he could cover the water, but based on that tee ball, there isn’t much wind out there that would prevent him from covering that water.

Still, Spieth was in good position, and his approach sailed right over the stick, ending up in a similar spot to Johnson’s original putt. Given Spieth’s putting ability, that meant Johnson likely had to make a birdie to end the tournament, and he set himself up thusly:

Johnson hit that shot almost as soon as Spieth’s shot stopped; you can hear Dottie Pepper note how quickly he played, and that betrayed how confident he was in his yardage, number, and swing.

Spieth couldn’t roll in his long birdie effort, tapping in for par to clear the floor for Johnson, who had less than four feet to win the tournament:

And that’s exactly what he did, closing out Spieth and kicking off the FedEx Cup in a very fun way. If golf could engineer duels like this, between the world’s #1 and #3 ranked players, the game would be all the better for it. Still, when they happen organically, they’re a lot of fun. Credit Johnson for coming up big late, and for ensuring such a fun tournament ended with a player winning it via birdie, instead of losing it via bogey.

This exact scenario could play out again at some point over the next few weeks, especially at the Tour Championship, where both players have had success in recent years. It also gives Johnson a leg up on the $10 million FedEx Cup prize; at this point, he’s almost assured of being in the top 5 entering the Tour Championship, which would put his destiny in his hands. (The same scenario as last year, when a final round collapse helped Rory McIlroy steal it from under him.)