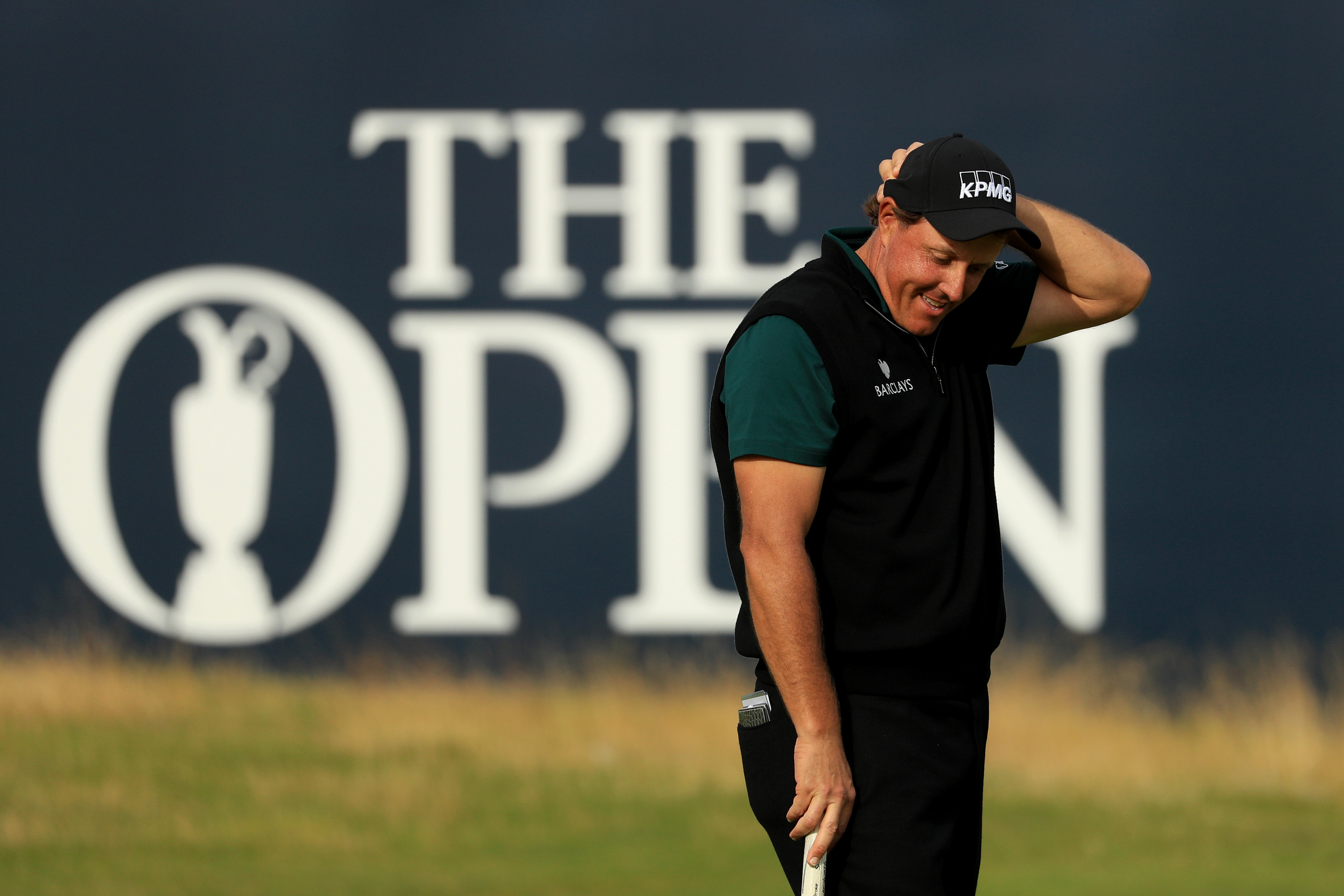 Note: Due to other obligations, I was not able to watch Phil Mickelson’s opening round at the British Open. I knew the final score, but I was not aware of how it occurred, so I decided to write this running diary as I followed along with the coverage.

#1. At about 8:26 AM on the East Coast, Phil Mickelson began his Open Championship with an iron from the first tee.

“On this golf course I played with Phil… which Muirfield was that, the ’82 Muirfield, fair to say he didn’t have a clue how to play a links.”

The Open this year is being played at Troon, not Muirfield, and Phil would have been 12 in 1982. I’m honestly not sure which Open Faldo is talking about. Maybe 1991, at Royal Birkdale? That would have been Mickelson’s first Open, and as the reigning US Amateur champion, he may have been paired with Faldo, the defending Open champion that year. In any case, Nick Faldo is generally wholly unprepared as a commentator, imprecise with his words and lazy with his critiques. This is as good an illustration as any.

Phil would hit the back of the green, lag it close, and tap in for par. A ho-hum beginning, and perhaps Phil could have hoped for a bit more from the gettable first hole, but opening with a par is never the worst outcome.

#2. Phil finds the left rough on the second, another short par 4, by professional standards. With 142 yards in, Phil knocks it to about twenty feet, pin high. After a lengthy commercial break featuring ads for middle-aged male vitality supplements, Mickelson hammers home his putt; had it not gone in, it would have gone about six feet past. However, it was dead center, and after two greens, Phil’s putter looks great. This is auspicious.

#3. We don’t see Phil play any shots. In fact, he disappears from the broadcast for 28 minutes of real-time. In between, multiple shots of John Daly in his ridiculous pineapple pants:

Seriously, what is that outfit? He looks like a cool male nurse who doesn’t play by the rules, sneaking in beer and smokes for nursing home residents. Actually, that might be what John Daly does when he’s not golfing.

From Phil’s group, we do see Ernie Els make a birdie on the third. Phil is playing the first two rounds with Els and Lee Westwood, a veteran group of easygoing guys, and one likely to draw a fairly sizable gallery. Els and Mickelson, of course, are former Open champions, while Westwood has come agonizingly close, including finishing T3 when Phil won in 2013.

Not seeing Phil normally means he’s doing just fine, as there’s nothing that catches a broadcast director’s attention like Phil hitting it into the Atlantic, or onto some poor sap’s lap. He’d make par on the third.

#4. Ah, we’re finally back with Phil! He’s in the middle of the fairway, going for this par 5 in two from 229 yards. He leaves it a bit short, and is faced with a slightly awkward eagle chip across a ridge that will need to skirt one of the many large pot bunkers defending the green. Fortunately for Phil Mickelson, he’s Phil Mickelson. He deftly manages the shot, leaving himself with a couple of feet for a formality birdie.

Except, this being Phil, no birdie putt is a formality. He catches the lip, and the ball circles the rim for a full 360 degrees before dropping.

#5. Phil reaches Royal Troon’s first par 3, playing 206 yards, and he pulls a 7-iron. Faldo openly questions Phil’s club selection. Mickelson hits the green, pin high, but about forty feet away. Phil lags another long putt very well, tapping in for par. At this point, he’s 2-under through five holes, with Patrick Reed leading in the clubhouse after shooting  a 5-under 66 in the gentle conditions.

#6. We go another 22 minutes without seeing Phil. When we do, he’s putting for birdie on the par 5 sixth, from about twenty feet. He’s using his odd putting grip, left-hand far below his right, essentially utilizing a pencil grip, and…bam! He rolls in yet another birdie, his ball turning sharply at the cup and dropping, a perfect read. I unofficially have him at nine putts through six holes.

Johnny Miller makes an appearance, describing the relative ease of the front of the course, compared to the back. He does not offer an opinion on Nick Faldo’s daughter’s adenoid procedure, which really is too bad. 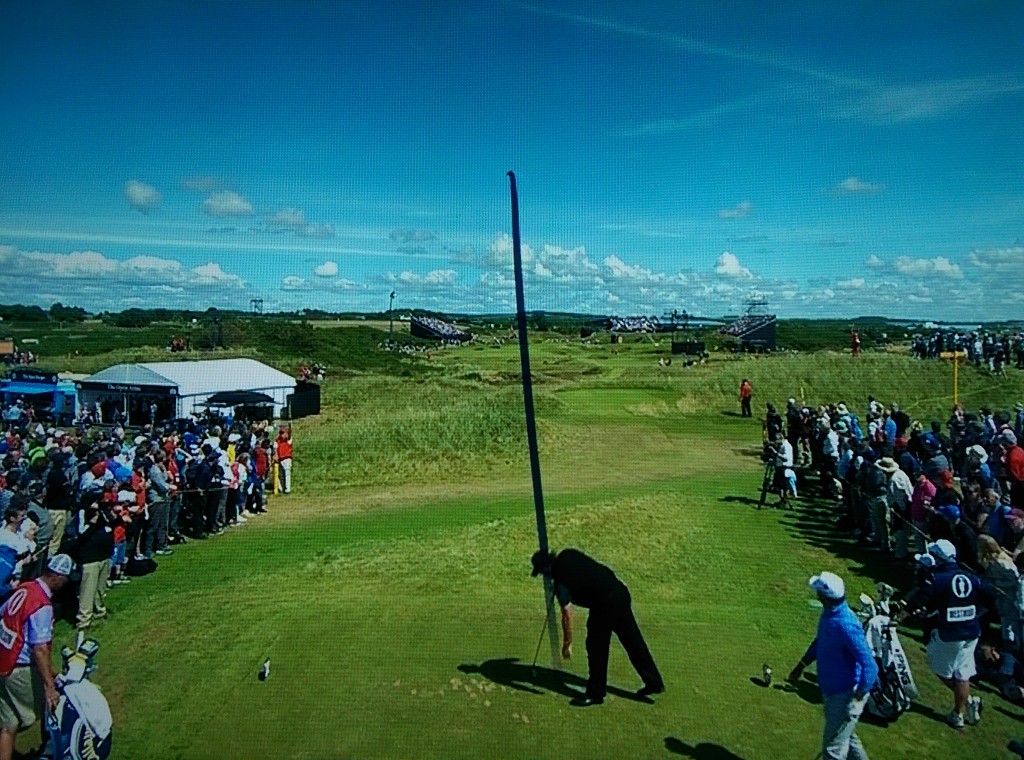 Having split the fairway, he’s left with 139 yards, and he hits a nice wedge at the flag. Right on line, it hops twice and stops, leaving about fifteen feet. Miller notes how well Phil’s putted so far, and Mickelson doesn’t disappoint, lagging it close once again. Through seven holes, he’s not even had anything resembling a difficult par save. Els birdies to get to -2 himself, and Westwood follows right on top with a birdie of his own, getting back to even. Phil cleans up.

#8. This 124-yard par 3 is known as “The Postage Stamp” for the shape and small size of the green. As Roger Maltbie notes, the conditions at the moment are such that the lack of green size isn’t so intimidating:

Phil hits a wedge to about two feet. He looks absolutely dialed in. Miller comments that Phil goes for the thrill. Trenchant analysis. (Still better than Faldo.) To this point, the crew is more excited about defending champion Zach Johnson’s three-birdies-in-four-holes start.

Phil makes his birdie, and the booth points out he still has the toughest parts of the course ahead. We do get a nice montage of golfer reactions after they’ve hit poor shots into the tiny eighth green. Those are always fun montages. Phil is now tied for second place at -4.

#9. We join Phil in the fairway, because why would we want to watch Phil Mickelson hit tee shots? It’s not like there’s any suspense involved with them. With 177 yards into the par-4 9th green, and hits the middle of the green. Ho hum. Miller says, over a super slo-mo shot of Phil’s swing:

“If there’s one weakness in his game, it’s that he turns that toe over so fast.”

I’m not an expert on the golf swing, but come on.

Mickelson lags his birdie putt to inches, and taps in for par. I have him at fourteen putts on the front nine, and what’s so shocking is how routine it’s been. He’s rolled in a few long ones, but aside from his tee shot on #8 and maybe his eagle chip on #4, we haven’t really seen any traditional Phil magic. He’s just played solid golf, made no mistakes, and putted very well. And it’s working, as he’s out in 32.

CLICK HERE FOR THE REST OF PHIL MICKELSON’S OPENING ROUND >>>