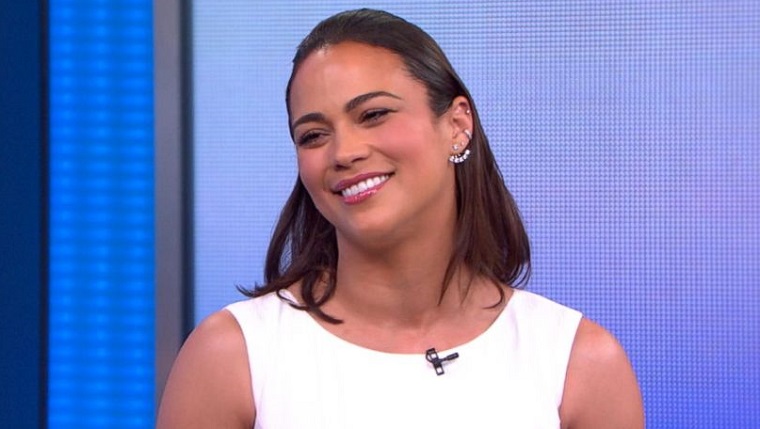 Typically, seeing Tiger Woods and Paula Patton in the same sentence might lead to a different conclusion. While the golf star has been in the headlines recently for his resurgent play, there was a time when Woods was in the news for very different, off-the-course reasons. As for Patton, she’s a notable actress who’s been in films such as Precious and Mission: Impossible – Ghost Protocol, she might be best known for being the ex-wife of singer Robin Thicke.

But this is not that kind of article. Patton has a new movie in theaters, Traffik, about a couple on vacation who are suddenly terrorized by a biker gang involved in sex trafficking. (Not to be confused with the 1989 British TV miniseries about the drug trade that was eventually adapted into Steven Soderbergh’s 2000 film, Traffic. Although I don’t think anyone was confused by that.) The movie goes into wider release around the country this weekend.

Promoting Traffik in an interview with Shadow and Act’s Nadine Matthews, Patton mentioned that she’d love to play Tiger Woods in a movie. Though the two are both bi-racial, there’s one obvious problem with Patton portraying the golfer that has nothing to do with her skills on the course. But to her, the gender issues wouldn’t be a big deal.

“I don’t see why a woman can’t play a man and I think that he’s an interesting character. Back when he was in his prime, obviously he had his demons. He was a conflicted person. He was great at some things and yet he had these flaws. He must have had to put on quite a facade and was probably hiding a lot of pain. Characters like that are very interesting to play.”

We’re going to take a guess that Woods wouldn’t be crazy about being portrayed on screen by a woman. That would certainly be an issue if any such movie were based on material such as Woods’ book, The 1997 Masters: My Story, or the new biography by Jeff Benedict and Armen Keteyian, the veracity of which Woods and his lawyers have disputed.

Maybe a movie could sidestep any rights issues by portraying a golfer who resembles Woods, but has a fictional name. (“Championship golfer, Cougar Timbers!”)But even that would be difficult legal territory if the character resembled Woods too closely or tried to depict real-life stories associated with him.

The only shot Patton might ever have at playing Tiger Woods is if she portrayed the golfer in re-enacted scenes for a documentary (which likely wouldn’t be taken seriously) or in an obvious comedy where such a portrayal could possibly be labeled as satire.

Or maybe a particular film could hope Woods has a sense of humor about being portrayed by a woman or maybe gets what such a movie would be saying artistically and it could be similar to Cate Blanchett portraying Bob Dylan in Todd Haynes’ 2007 film, I’m Not There. (That performance earned Blanchett an Academy Award nomination.)

At the risk of making a snap judgment, does Woods come across about being open to something like that? Maybe Patton could attempt to make the case personally. It might be her only shot at playing a role that would certainly generate a whole lot of attention.