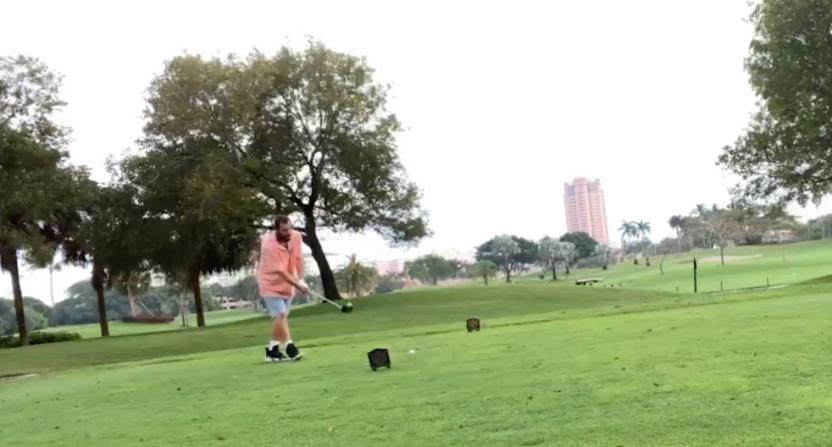 The classic golf — and sort of hockey — comedy Happy Gilmore hit theaters on Feb. 16, 1996. And for Tuesday’s 25th anniversary of the movie, Adam Sandler hit the links and brought back the iconic Happy Gilmore swing.

Happy loves you all! Thanks for everything! pic.twitter.com/p1aY9JcFWh

We didn’t get to see Sandler just taaaaaaaap it in with a hockey stick putter, but the drive still appears to be in pretty good shape, at least.

Shooter McGavin — played by Christopher McDonald — saw Sandler’s video, and brought out the living room putting game in response. The rivalry lives on!

Ben Stiller — who plays the orderly at the nursing home of Happy’s grandmother in the film — even responded to Sandler.

That’s a beautiful swing Mr. Gilmore. Congrats on your anniversary, and being such a loving grandson. So happy to be a small part of taking good care of her during her “golden years”. 😉

And the PGA paid tribute by showing off a video montage of many professional golfers doing the Gilmore swing and reciting lines from the movie.

The movie was released 25 years ago today.

Well done by everybody here, and happy 25th anniversary to Happy Gilmore.