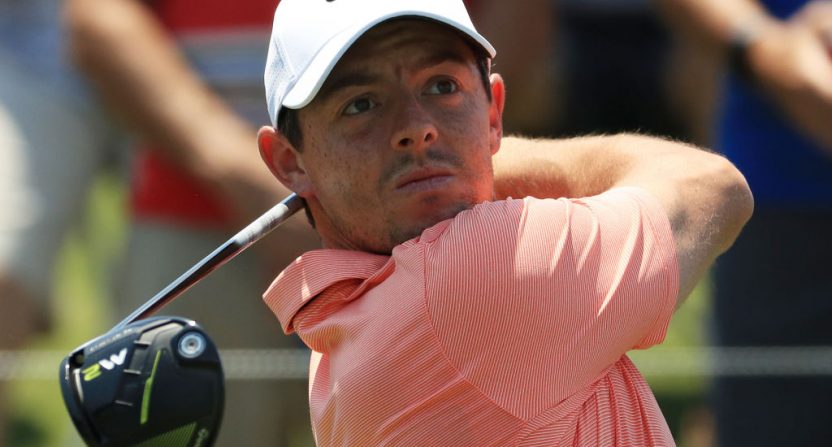 The golf equipment industry is a difficult game these days.

For a long time, companies thrived on rolling out one or two new models or product updates a year, trusting that golf’s demographic would be interested in and willing to shell out to upgrade.

Now, though, things are a bit different. Nike exited the club and ball business last year, freeing up their tour athletes (guys like Jason Day, Rory McIlroy, and the shell of Tiger Woods) to play other equipment if they preferred. Many of those players gravitated toward TaylorMade; all three of those names, for example, started using TaylorMade equipment. Yesterday, Rory McIlroy inked a deal to endorse TaylorMade products, playing a complete set of TaylorMade clubs and a ball.

That made today’s news that Adidas (TaylorMade’s parent company) was selling the brand and exiting the golf equipment business a bit surprising.

Another power player has exited the golf equipment business, with Adidas announcing Wednesday it has agreed to sell its golf brands TaylorMade, Adams Golf and Ashworth to private equity firm KPS Capital Partners for $425 million.

The brands’ sale price is evidence of the fall of the golf equipment market. In 2012, Adidas golf brought in $1.7 billion in revenue. Four years later, total revenue was slightly above $500 million.

Rovell attributed the decline in the business to the economic crisis of the late ’00s:

The fallout in the equipment business has its roots in the Great Recession, which resulted in companies and retailers discounting clubs in order to drive up purchases in a business where product turnover is part of the equation.

That’s a debatable point of view. The golf equipment game was always a bit of a bubble; unsustainable growth paired with an influx of new players. The constant marketing gimmicks played a role as well; it turns out that after a decade or so, people tend to catch on that every new driver isn’t going to magically provide five new yards. (The math doesn’t quite work out there.)

And though there have been legitimate technical innovations (especially in the area of club adjustability and fitting, as well as overall customization), at a certain point, any gain in technology from one model year to the next begins to be microscopic. Players can keep the same driver in their bags for three or four years without missing much, and that’s good for the consumer, but bad for companies who were used to pumping out product at top prices.

Then, when it is time to shop around, proliferation of used club marketplaces has taken a bite out of retailers as well. There will always be a certain kind of golfer who wants to spend top dollar on whatever the latest gear is, but that’s very much not the norm. Instead, more bargain-conscious buyers can look at last year’s models for steep discounts (which is what happens when you’re pushing out the new stuff within a year.) Plus, some of golf’s newest players are playing in ways that don’t even require purchasing equipment, including things like TopGolf. Which is fantastic for the game as a whole, but perhaps not so great for the traditional business model of equipment companies.

My own experience shouldn’t be taken as representative of the golf market as a whole, but I’m squarely in the demographic golf companies are likely targeting (major golf enthusiast, plays multiple times a week, late 20s/early 30s) and I used to upgrade at least one area of my bag each year. But now, the most recent club purchase I made was in early 2015, when I traded in a driver for a used driver. In 2014, I bought two wedges. I’ve had my (used) irons since 2013, my three wood and hybrids since like 2010, and my putter since 2005.

I just don’t have the need. I’d rather spend equipment money on paying rising fees to play, or on balls (which I also buy used), or even saving up to take a weekend somewhere for a stay and play trip. Just getting out there is the goal, and as I’ve learned, that’s what’s worth the money. Everyone has a different calculus, of course, but if golf is going to evolve, it’s going to have to change. Sometimes those changes hurt. But just because an industry isn’t as booming as it once was doesn’t mean it’s failing.