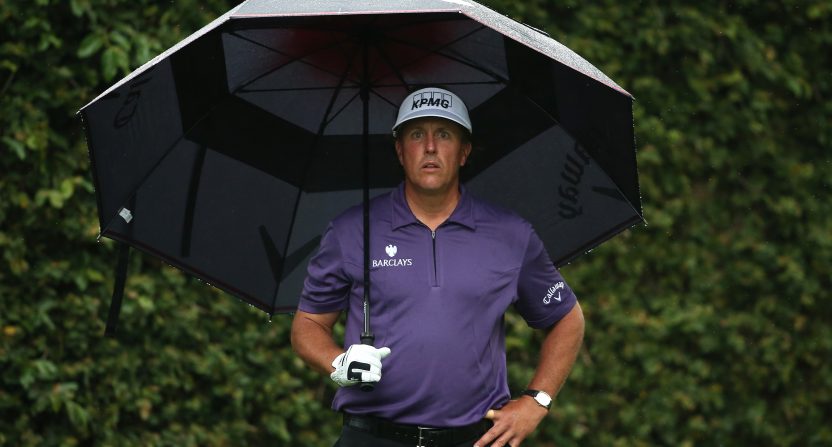 Arnold Palmer was a sporting legend, a golfer who transcended golf and become a legitimate American icon.

That’s somehow not hyperbole, in this case. Well, I guess maybe it is by definition, but Palmer’s importance to golf cannot really be underestimated.

We learned just how important he was to the golf world when he passed away last fall at the age of 87. The following weekend, both Ryder Cup teams commemorated Palmer, and Rickie Fowler even took the Ryder Cup itself to Palmer’s memorial service. (Amazingly, Palmer still holds the record for most Ryder Cup matches won.)

This week marks the first Arnold Palmer Invitational held since his passing, and the field is a pretty good one. Of the top ten players in the world, five will be playing: Jason Day, Rory McIlroy, Hideki Matsuyama, Henrik Stenson, and Rickie Fowler. Unfortunately, the focus in some circles has been on the players not adding the event to their calendars, including Phil Mickelson, Dustin Johnson, and Jordan Spieth.

Not laying up. If I were a pro, I'd want to be at Bay Hill this week. One day. All days. Signing and sharing. Don't see it any other way. https://t.co/V2pV27k0ZE

One of many who owes a career to The King. To the legacy, the connections, the memories, the thumb and the smile… https://t.co/7JCNj0dkHx

That’s not to pick on Ginella (well, maybe a little bit), because there are plenty more people who have tweeted, posted, written, or otherwise shared this view, including tour players themselves:

Disappointing. Totally understand schedule issues. But 1st year without AP. Honor an icon! Without him wouldn't be in position we are today https://t.co/yzaIqbbSpM

Would it be nice if each and every one of the top-75 players in the world were there this week? Of course it would be. But it’s just not realistic, for a few different reasons.

First of all, some players just don’t enjoy the golf course. If it doesn’t suit their game, they’re not likely to play. That’s what Ian Poulter (who is playing) cited:

“Let’s talk about who’s playing,” said Ian Poulter, who has received a sponsor exemption to play the tournament. “It’s going to be a fantastic week. It’s going to be a celebration of Arnie. The field is fine. There are some people who do not like that course and they are absolutely not disrespecting Arnie.

Though I’m often loathe to agree with Poulter on anything, for various reasons, he has a point.

the calendar isn’t doing the tournament many favors this year. The WGC-Match Play follows the API, and it comes just two weeks after another World Golf Championship event in Mexico. And with the Masters two weeks after the Arnold Palmer this year, it’s just not really fair to expect every single top player to be at Bay Hill this week.

Just as an example, let’s look at Phil Mickelson, the player observers most want to be playing this week.

On some level everyone is just subtweeting Phil, who doesn't even have twitter (and prob should be here). Otherwise it's such a lazy take.

I half-agree with Tron on this one.

The top players build their entire calendar around the majors first. The WGC events are in a tier just below the majors in terms of importance. For Mickelson, who typically prepares for Augusta by playing the Shell Houston Open the week prior to the Masters, you have those two weeks blocked off. And with the WGC the week prior, that’s three weeks.

Asking him to add the Arnold Palmer and play four weeks in a row, at 47? Culminating at Augusta, which is likely his favorite week of the entire season? That’s just too much to ask. And the same goes for younger players as well.

For me, what it boils down to is this: there are ways to honor Palmer’s legacy beyond showing up at the tournament this week. For one, this was always going to be the year that the tournament was strong. But going forward, without Palmer’s presence, it very well could begin to lose some luster. That’s what some fear. Guys like Mickelson could be serving the tournament better by making a return in future years, when it could fit their calendar better anyway.

But moreover, Phil is the modern golfer most compared to Palmer. That’s why so many people wish he was playing this week. But he’s earned those comparisons by playing a daring style of golf while maintaining great relationships with the fans. No one has embodied Palmer’s essence like Mickelson, and that’s true whether or not he tees it up this week in Florida.

It’s great the field is strong this week, and hopefully that’s true for years to come. But players who aren’t there this week aren’t ignoring or disrespecting Arnold Palmer. That’s short-sighted.

Palmer’s impact on golf far exceeds his namesake tournament. There’s no reason tributes to him can’t do the same.