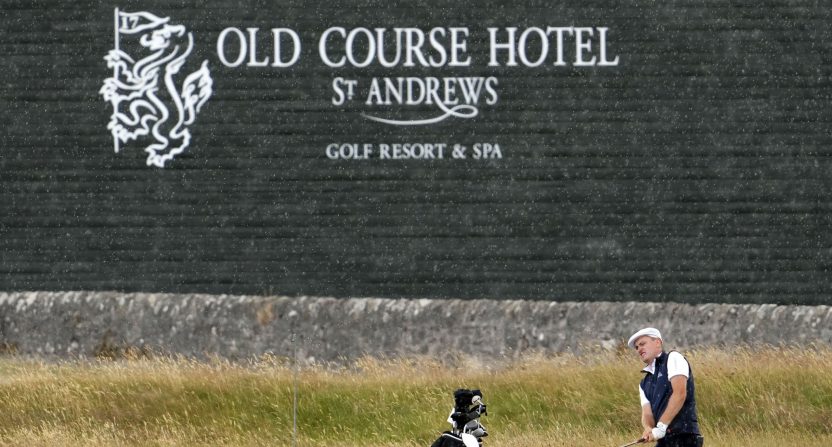 If LIV Golf players don’t feel very welcome at the 150th British Open, the organizers of the storied event have made it clear that things can get even less hospitable for those who play in the Saudi-backed league.

R&A chief executive Martin Slumbers spoke Wednesday ahead of the 150th Open Championship at the Old Course at St. Andrews, lobbing a not-so-veiled threat about the way it allows golfers to compete in the future.

“I firmly believe that the existing golf ecosystem has successfully provided stable pathways for golfers to enter the sport and develop and realize their full potential,” Slumbers said. “Professional golfers are entitled to choose where they want to play and to accept the prize money that’s offered to them. I have absolutely no issue with that at all. But there is no such thing as a free lunch.

“I never said the best golfers will not be able to play. We will hold totally true to The Open being open to anybody. But we may well look at how you get into that, whether it’s an exemption or a need to qualify through our qualifying process.”

Slumbers made it clear that they have no plans to ban golfers from participating in The Open Championship, but that the criteria for how they qualify could change.

“Looking ahead to The Open next year, we have been asked quite frequently about banning players,” Slumbers said. “Let me be very clear: That’s not on our agenda. But what is on our agenda is that we will review our exemptions and qualifications criteria for The Open. And whilst we do that every year, we absolutely reserve the right to make changes as our Open Championships Committee deems appropriate.”

Slumbers also discussed the reasons why The Open did not invite two-time winner Greg Norman, who is CEO of LIV Golf, to participate in festivities this year.

“We are absolutely determined to ensure that this goes down in history as about The 150th Open,” Slumbers said. “We decided that there would be, based on noise that I was receiving from multiple sources, that that was going to be potentially unlikely.

“We decided that we didn’t want the distraction. We wanted to ensure that the conversation was all about this week and playing golf and balls in the air [on Thursday] and the champion golfer on Sunday.”