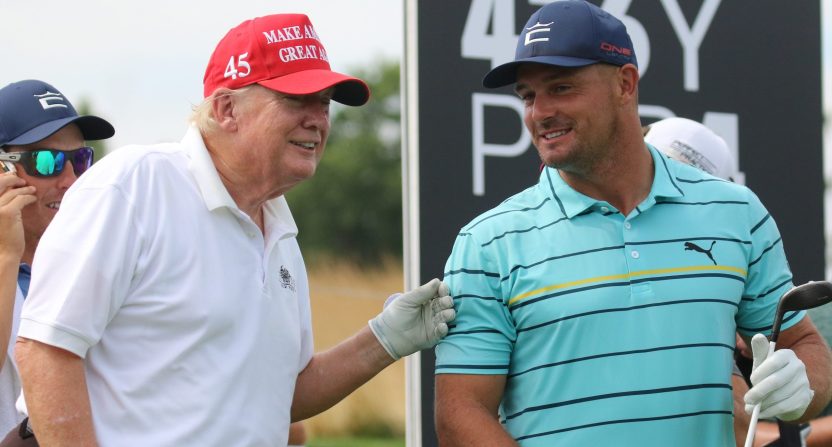 Bryson DeChambeau had a big day on Thursday, teeing it up alongside fellow golfer Dustin Johnson and former President Donald Trump in the LIV Golf Invitational pro-am at Trump National Golf Club in Bedminster, New Jersey.

The former PGA Tour golfer who jumped to LIV Golf a few months back and lost some sponsors because of it had glowing praise for the 76-year-old former President’s golf game.

“He’s actually a really good golfer,’’ DeChambeau said. “Anytime you can play with a president, past or sitting, it’s just an honor no matter who it is. I feel very lucky to have a relationship with him and he’s always been generous to me.

“He’s a big human being and so he’s got that speed. Hopefully, I can get him into speed training a little bit. He just hits the ball quickly and he’s up and running.”

The trio had played together before in South Florida.

Trump made headlines on Thursday, though not for his golf swing. Instead, it was for the curious comments he made about 9/11, seemingly saying that it’s unclear who was being the attack when that information is well-known and reported on, presumably because his golf course was hosting the Saudi-backed tour.

“Nobody’s gotten to the bottom of 9/11, unfortunately,” Trump told ESPN Thursday. “They should have, as to the maniacs that did that horrible thing, to our city, to our country, to the world. So nobody’s really been there. But I can tell you that there are a lot of really great people that are out here today. And we’re gonna have a lot of fun and we’re going to celebrate.”