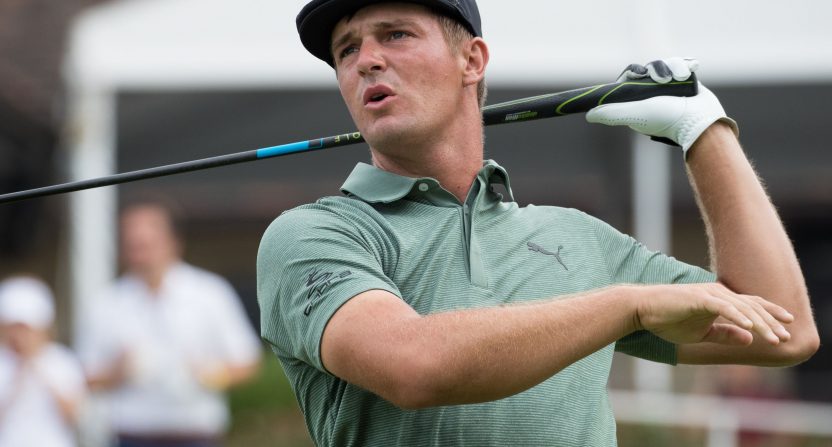 Bryson DeChambeau won the first two FedEx Cup playoff events this year, and in doing so locked up a captain’s pick for the American Ryder Cup team. It’s been a quick (if not unexpected) ascendance for DeChambeau, who started the year ranked 94th in the world and is now up to 8th, boosted by his three wins on Tour.

DeChambeau is a polarizing figure in the golf world. His gifts for the game are apparent, but his quirks are even more visible. It’s more than just playing one length of club through the bag, or having his weird side-saddle putter ruled ineligible by the USGA, or being told he can’t use a compass to calculate distance on the course, or melting down on the range at the British Open, or any number of other examples of Bryson being Bryson.

Plenty of athletes have quirks. But what rubs people the wrong way about DeChambeau is his overall attitude; my friend described it best when he said what bothers him most is Bryson approaching a centuries-old sport and essentially saying “Yeah, actually, I’ve figured this thing out.” Which brings us to today in Bryson DeChambeau, as reporters watched his range session at East Lake Golf Club ahead of the Tour Championship, where he’ll have the best chance to take home the $10 million PGA Tour playoff prize.

Bryson is using two launch monitors. Hitting brand-new balls straight out of the box. Someone scrubs his clubface before every shot, then spritzes the ball with water to simulate morning dew.

It’s not uncommon for tour pros to have launch monitors on the range now, but going with a dual-monitor setup is certainly something. Hitting balls right out of the box is also fascinating, and requiring a perfectly clean clubface every time is another layer of regimented behavior that can’t be common even among professional golfers, a fussy bunch in general.

But to have someone spritzing a ball to simulate morning dew? That’s the sort of thing that separates Bryson. Golf Twitter (actually not a bad place to be most of the time, if you find the right crowd) was predictably amused by the whole setup:

@TronCarterNLU If you have two launch monitors in the bag you don’t have one.

Golfers really do care about small details, there’s no disputing that. But when Phil Mickelson talks about the thousands of variables he considers, we all tend to understand that it’s probably a mixture of bullshit and real, genuine intuition. Phil has always enjoyed presenting himself as a character. In Bryson’s case, he really seems to mean it. This hasn’t exactly failed him so far, obviously; he’s made it.

But long-term, can anyone really play like this? Or even live like this? And what happens when variables pop up that even the most comprehensive preparation can’t simulate? It just seems like such a grind, and one that can’t be sustainable over the course of an entire career.

Maybe he’ll win $10 million+ this weekend. If he does, he might relax a bit.

"Way this game look we might be better than the 49ers."

"Way this game look we might be better than the 49ers."