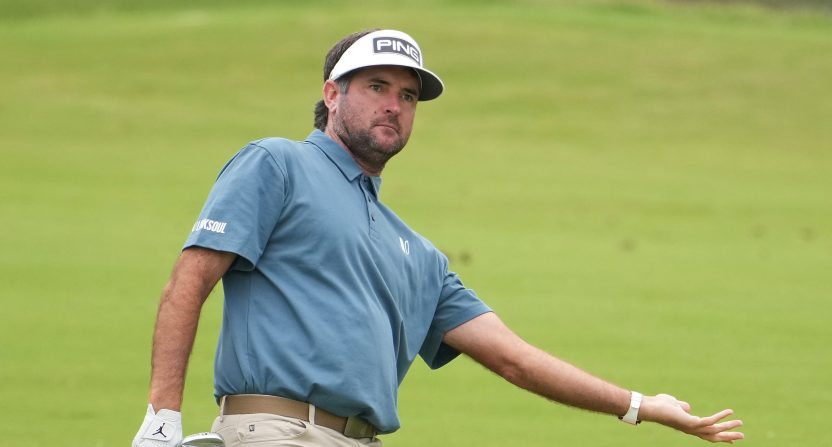 Watson officially announced he was joining up during Friday’s LIV broadcast from Trump National Golf Club in Bedminster, N.J.

In case you missed the broadcast… pic.twitter.com/G9PLQR0ntm

Watson said in his announcement that he will be a “non-playing team captain” at the next LIV Golf event in Boston as he continues to rehab his meniscus. He also noted that it’s unlikely he’ll play until 2023.

Watson was on the list of golfers expected to join LIV Golf back in April but he seemingly refuted the notion by sharing his upcoming schedule, which didn’t include any of their events on it. Perhaps because so many of his peers have since joined and are weathering the ongoing critical storm that comes with it (thanks to the copious amounts of money they’re making), rumors swirled this past week that Watson was now nearing a deal to join them.

Watson fits the mold of many of the golfers who have joined LIV, as a former major champion who is past his prime but still offers the kind of name recognition that helps legitimize the “sports-washing” operation. Watson won the Masters in 2012 and 2014 and briefly reached 2nd place in the Official World Golf Ranking in 2015. He played in just nine official PGA Tour events this year, posting just one top-10 finish as he’s dealt with knee issues.

The news that Watson is the latest PGA Tour veteran to defect to LIV Golf certainly garnered some reactions on social media.

Bubba Watson confirmed as joining LIV during 1st round broadcast of Bedminster event. Won't play until next season though. (Wasted no time in a "grow the game" claim)

"It's cliche but I love growing the game of golf."

Bubba used to be focused on growing the game of ice cream.

Bubba is the next heading to LIV. https://t.co/OlkXhhWz9A