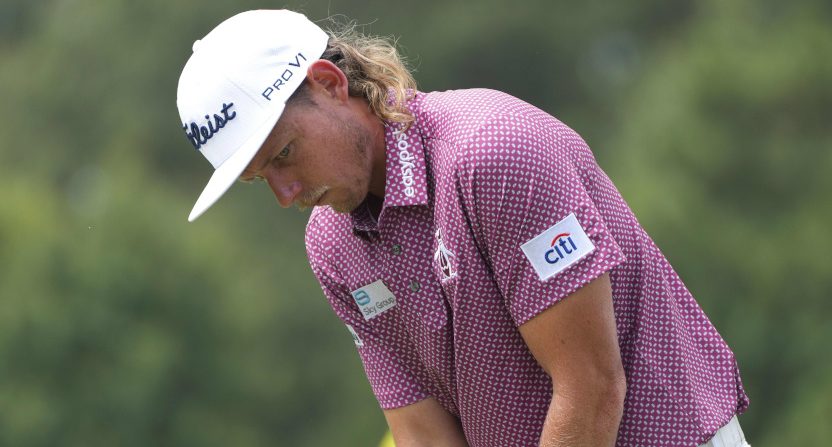 There’s been a lot of talk about Australian golfer, current world No. 2, and recent British Open champion Cam Smith possibly leaving the PGA Tour for the Saudi-backed LIV Golf Series. That talk was enhanced by Smith refusing to address the topic at a press conference ahead of this weekend’s first FedEx Cup Playoffs event (the FedEx St. Jude Championship) in Memphis, and by an unusual on-course controversy between him and world No. 1 Scottie Scheffler Saturday, where Scheffler walked directly in front of Smith during Smith’s attempt to line up a putt. And on Sunday, something else happened that bolstered the Smith-to-LIV talk, with the PGA Tour handing Smith (seen above watching a putt Sunday) a two-stroke penalty before his final round for playing the ball from the wrong place when he was in the penalty area. Here’s the Tour statement on that penalty:

“Prior to the start of the final round of the FedEx St. Jude Championship, Cameron Smith was assessed a two-stroke penalty for a breach of Rule 14.7 (playing the ball from the wrong place) on Hole No. 4 during the third round where he was operating under Rule 17.1 (when ball was in penalty area). Smith’s score has been adjusted and he will begin the final round at 201 (-9).”

The tour put out that statement on Twitter Sunday. Here’s the play in question:

Cameron Smith has been penalized two strokes for improper placement of the ball in the penalty area in Round 3.

He now begins the final round trailing by four.

More on the penalty ⬇️ pic.twitter.com/a1wr2Bqv9R

But this led to a lot of people saying this might be yet more incentive for Smith to leave for LIV Golf:

What the PGA did to Cam Smith was just downright dirty!!!!!! I wouldn’t blame him one bit if he went to LIV after today!

Not a LIV fan or supporter at all…..but docking Cam Smith 2 shots going into the final round is wack. God I hope he wins.

Others suggested the Tour may be keeping an even closer eye than usual on Smith given the LIV talk around him, and questioned non-rulings around other golfers’ drops:

⁦@PGATOUR⁩ – So, you penalize ⁦⁦@camsmith9 today for a drop yesterday but not until just before his round today, but Lee Hodges drop from below knee height today is all good? pic.twitter.com/TuQcs8AwuA

Many others complained about the decision to announce this penalty a day later, especially with possible impacts there for betting and daily fantasy:

The PGA tour giving Cam Smith a penalty this late in the day is insanity.. the gambling & DFS implications just add another layer to it https://t.co/gZk7FrslKU

@PGATOUR it is absolutely stupid to penalize Cam Smith a day after the supposed penalty and say “the rules are the rules”. If you don’t call it on the field you CAN NOT go to video and call it a day later. These are the kind of situations that cause people to leave the PGA.

Cam Smith just received a 2-shot penalty a day later because of this picture. Didn’t take full relief from the penalty area. Official on ground deemed it in play live.

Had his ball come to rest here in normal play, no penalty. Taking a drop, penalty.

Imagine this in other sports? “There was a pass interference in the first half, we just saw it.” “That pitch last inning should’ve been called a strike.” Nobody is arguing the violation — including, apparently, Cam Smith. It’s the timing. Next-day ruling wrong on so many levels.

And some noted that while there may be nothing actually wrong here, the timing of it draws a lot more questions than it would otherwise:

The Cam Smith is one of those just incredible situations where the ruling is right, he owned up to it and just didn't know the rule, it's very much a "nothing to see here" situation where nobody is to blame, but it's *perfectly* suited to fit into a broader conspiracy theory

Smith finished even on the day, which had him tied for 13th with a 271 overall.