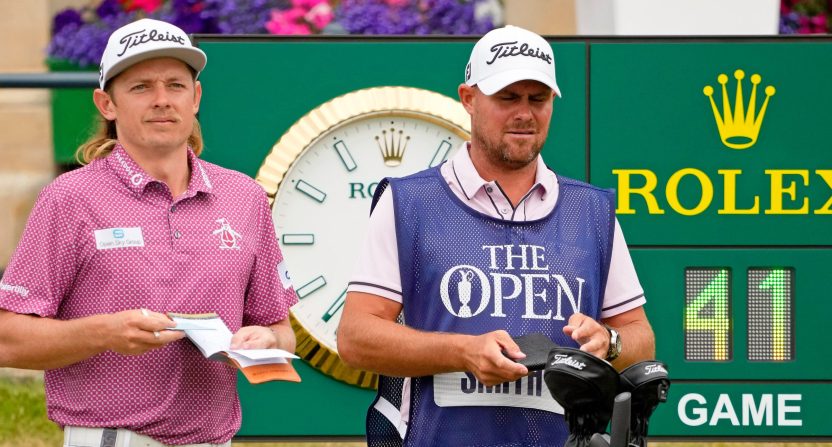 For much of Sunday’s final round, Rory McIlroy winning the British Open seemed almost preordained. Then, Cameron Smith flipped the script.

While he was down three shots as he made the turn, Smith took the lead on the 14th hole — his fifth straight — and never looked back. He finished at 20-under, tying the record for lowest score in relation to par ever in a major, as well as the lowest finishing nine holes in major championship history. Smith also carded two rounds of 64, becoming the first player in the history of major championship golf to do that.

That was all good enough to earn Smith the Claret Jug.

One of THE great Final Round displays at The Open 👏

Congratulations, Cameron Smith, the Champion Golfer of the Year#The150thOpen pic.twitter.com/vkuPua9Iqv

'With a score of 268, the winner of the Gold Medal and the Champion Golfer of the Year is Cameron Smith' 🥇🏆#The150thOpen pic.twitter.com/XinZ7c9DO8

But despite the historic nature of Smith’s win, it was anything but inevitable, even down to the final shots.

Smith’s lead seemed in jeopardy on the 17th hole when he was left with a lengthy par putt. But Smith’s putter had been on fire all day and it didn’t let him down on the Road Hole.

With the par on 17, Smith came to the 18th hole at 19-under. A par would have tied him for the lowest score in an Open Championship ever contested at St. Andrews. It also wouldn’t have been good enough for an outright win. That was because Smith’s playing partner, Cameron Young, drove the green on the short par-four and drilled his eagle putt, giving himself a share of the lead.

But Smith also had a good drive on 18 and hit a lag putt to short range. Young’s eagle did add some drama to Smith’s short putt — but he was up to the task.

The tournament wasn’t quite over, though. McIlroy was only two behind Smith and while he didn’t drive the green, did leave himself a short pitch. Had he made it — something he’s quite capable of doing — he would have forced a playoff with Smith. But on this day, it was not meant to be. McIlroy’s pitch was never close and he ended up having to settle for third place. With that, the tournament belonged to Smith.

It was one of the greatest performances in the history of the sport and people watching the tournament were in complete awe of Smith’s final round.

Cam Smith’s last 10-11 holes is some of the best golf I’ve ever seen. That was like watching Steph get hot in a playoff game.

30 on the final 9 holes to win the Open is insanity. What a complete gamer Cam Smith is. Rory couldn’t get a putt to fall. Had so many looks. Amazing tournament to watch.

Congrats to Cam Smith for a historic win. And congrats to myself for picking him to win.

That was bloody awesome Cam Smith! 👏👏👏👏👏
Putter was on 🔥
The claret jug is coming home!! 🇦🇺 #TheOpen

Just heartbroken for Rory, but damn it, Cam Smith is something else. And how about that kid from Westchester, eh? What a Sunday. What a week. What a 150th Open.👌

One of the best 9 holes…ever…considering stakes and circumstances, by Cam Smith. What a player.

Smith’s victory also means that every major winner from 2022 was under the age of 30. Per Justin Ray of Twenty First Group this is the first time that has happened since 1934 — when the Masters was first played. In fact, as Jon Rahm and Colin Morikawa are both under 30, as well, the last six major champions have yet to celebrate their 30th birthdays. The last golfer older than 30 to win a major was Phil Mickelson at the 2021 PGA Championship.

So, Smith’s victory is the latest sign that we’re entering a new age of golf.