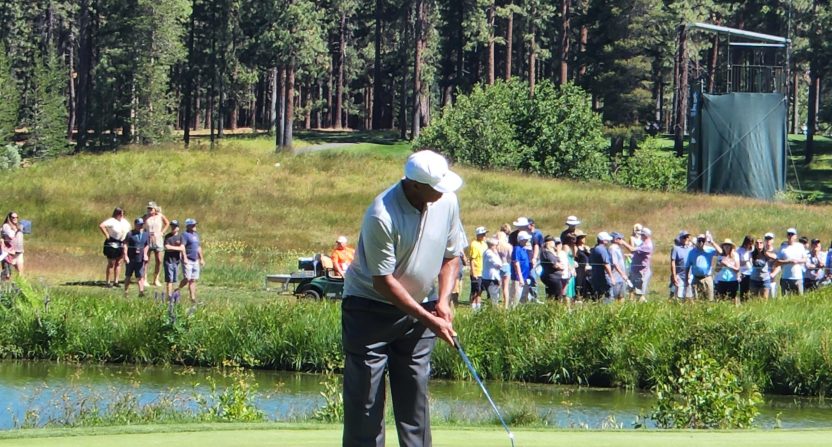 NBA Hall of Famer and current Turner Sports personality Charles Barkley has been in the golf world spotlight as of late after revealing earlier this month that he would “sit down” with LIV Golf commissioner Greg Norman to discuss potentially joining the controversial tour to lead their broadcast team.

Barkley later said that he was giving LIV Golf an ultimatum, to either offer him an official contract by Thursday or he would walk away from discussions.

He has now made his decision about potentially joining LIV on Friday, announcing that he would be ending negotiations with LIV Golf.

“I want to thank Greg Norman and LIV for their interest in me,” Barkley said during a phone interview with the New York Post. “I wish those guys great success and nothing but the best. But, in my best interest, and being fair to Turner — because Turner and basketball have given me every single thing in my life — It is best for me to move on and I’m staying with Turner for the rest of my TV career.”

It was certainly a strong statement for Barkley to not only continue negotiations with LIV but also to say that he plans to stay with Turner until his TV career is done.

Many are excited that Barkley will remain in his role on NBA on TNT alongside Ernie Johnson, Shaquille O’Neal, and Kenny Smith moving forward.

charles barkley at the @NBAonTNT offices this morning pic.twitter.com/uVRYMdMNft

On the surface, it looks like LIV Golf missing out on Barkley to head their broadcast team is a big loss. However, Barkley recently said that there are “15 or more big-time broadcasters” that have contacted him and said that they have also been in contact with LIV.

Charles Barkley says that after news broke of his meeting with LIV, 15 or more "big-time" broadcasters contacted him and said they'd been in contact with LIV as well.

"Some of the most famous announcers in the world called me and said 'Chuck, what do you think?'" pic.twitter.com/I00n4eU8vZ

If this is true, it means that they still may get a big name to head their broadcast team in the future, but it clearly will not be Charles Barkley moving forward.