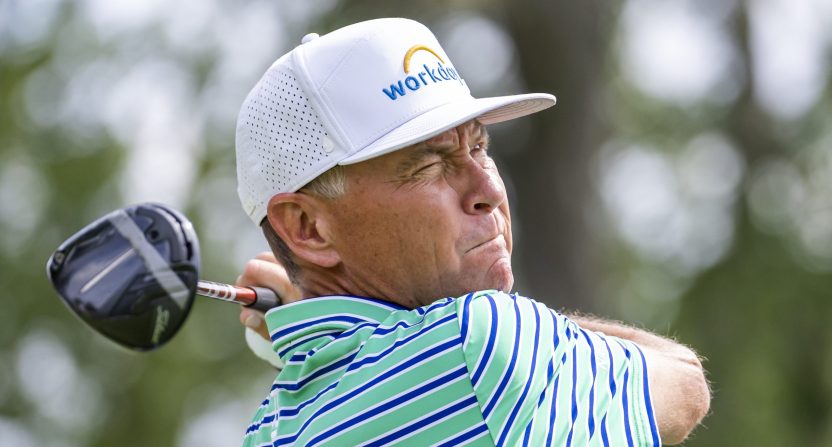 While the PGA Tour has suspended all LIV Golf Series golfers from regular tour events, it has no jurisdiction over the four majors. So, unless the governing bodies of golf’s four top events take an action that none of them have taken to this point, LIV golfers and PGA Tour players will walk side-by-side with each other at The Masters, PGA Championship, U.S. Open and British Open for the foreseeable future. But one Hall of Fame golfer has an idea.

If Augusta National, the Professional Golfers’ Association of America, USGA and R&A aren’t going to keep LIV golfers out, the top PGA Tour players should organize a boycott to force their respective hands. That’s at least the opinion of Davis Love III, the captain of the United States Ryder Cup teams in 2012 and 2016 as well as the captain for the upcoming Presidents Cup in 2022.

“Well, here’s the biggest lever,” Love said, per Michael Rosenberg of Sports Illustrated. “And it’s not the nice lever. But if a group of veterans and a group of top current players align with 150 guys on the Tour, and we say, ‘Guess what? We’re not playing,’ that solves it, right? If LIV guys play in the U.S. Open, we’re not playing. If they sue in court, and they win, well, we’re not playing. You know, there won’t be a U.S. Open. It’s just like a baseball strike.”

This is an interesting idea. And given the controversial nature of LIV, there would be a lot of public support behind it But there are some problems with Love’s idea — and they’re not minor.

A big one is the logistics of it all. This is why so many strikes and lockouts in team sports ultimately get decided in ways more favorable to the owners than the players. A quarterback who’s made tens of millions of dollars might have the standing to hold out for the best possible deal. The third-round draft pick entering his second season can’t afford to give up too many checks. It’s far easier for the owners to stand united. The same principle applies here.

Sure, a star player who has the finances and the secure place on tour to boycott a major. But while that would hurt the majors, those four tournaments could withstand the lack of star power. Could the younger golfers — the guys who haven’t made tens of millions of dollars and don’t have a secure place on tour — easily forego the chance to change their professional outlook with four good rounds of golf? That’s a harder sell.

Now, maybe Love’s idea wouldn’t include the younger, lesser-established guys. They’re generally not the needle-movers, anyway. But even if they’re not included, there’s another problem.

But do you know what might help extend those windows? The best PGA Tour players in the world not playing majors. If LIV golfers are going up against each other and a group of the lesser golfers on the PGA Tour, the LIV golfers are going to win far more often than not. That will extend their ways of qualifying for other majors.

The U.S. Open permits its last 10 champions to play, the British Open allows any champion under 60 to participate while the PGA Championship and Masters have lifelong invitations for past champions. Some LIV golfers already have those championships and will be playing in majors for a while if they want to. Love’s idea would only open the door for more of them to follow suit. That’s a classic example of cutting off your nose to spite your face.

Then there’s another matter, which was brought up by longtime teaching pro, Hank Haney.

This is officially the stupidest thing I’ve ever heard. What does Open mean? https://t.co/EwVIH7JCC3

Indeed, two of the majors are Open. When speaking about the U.S. Open in the classic movie, Tin Cup, Kevin Costner’s Roy McAvoy astutely pointed out that “They can’t ask you if you’re a garbage man or a driving range pro whose checks are signed by a stripper. You qualify, you’re in.” While Hollywood often takes some dramatic license, this is spot on. A tournament can’t be Open if it rejects players who meet its qualifying standards.

It’s not that we don’t see Love’s frustration here. He’s a veteran golfer, his father was a PGA Tour player and longtime teaching pro. Protecting the PGA Tour is important to him and rightfully so. He’s also a Presidents Cup captain and with so many prominent American golfers joining LIV, Love will harder time filling out his roster with superstars, something that has not been an issue for captains of the Ryder Cup or Presidents Cup in the past. So, it’s a personal fight.

But even if it’s a personal matter, what you do in the fight has to make sense. Love’s idea is largely impractical and would arguably hurt the PGA Tour golfers more than it would help them.