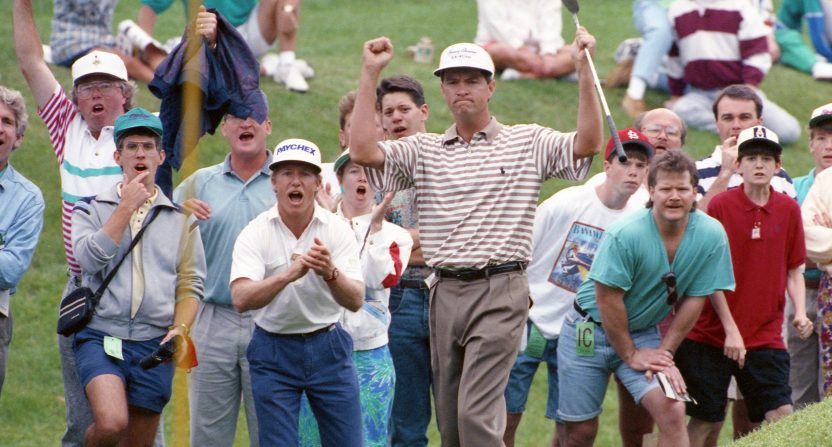 There has been so much bickering, name-calling, and public fighting between the PGA Tour and LIV Golf in the last year. But some golf fans feel as though it’s only a matter of time before the two golf leagues find a way to co-exist and grow the game together. However, don’t count Davis Love III among those who think there’s room to negotiate.

“Well, look, as I said a year ago, I would have said don’t worry about it,” Love said this week on the No Laying Up podcast. “Now you say, what’s next. I have no idea. I haven’t seen this movie before. We don’t know what’s going to happen. And it’s frightening. It’s disheartening.”

It certainly seems unlikely at the moment that the two sides will ever find common ground. One legal battle just ended with LIV Golf players failing to earn the right to play in the Tour’s playoff. Many other LIV Golf players are currently suing the PGA Tour over antitrust laws. The bad blood between the leadership of both sides seems almost impossible to overcome. All of which is to say nothing of the fact that LIV Golf’s Suadi Arabian backing complicates the road ahead for a lot of people and businesses in America.

But maybe, just maybe, there’s a chance for the Tour and LIV to come together. Then again, Love, who has previously suggested that PGA players could boycott LIV Golfer participation in events like the U.S. Open for leverage, doesn’t see it because LIV’s entire reason for existing is at odds with the Tour’s strategy, let alone Greg Norman’s strong opposition to all things PGA Tour.

“We can’t sit down with guys that are wanting to compete against our model, because they don’t want — if they were saying, hey, we just want to get along, we’ll play outside the U.S., how can we make this system work,” Love said on the podcast. “Greg Norman flat-out will say … we want to shake up the golf world, we want to take over. And behind the scenes, they’re saying to players, we’re going to own the PGA Tour. You will see going forward in this Tour case, you know, their strategy is not to co-exist.

“So to your question before: Could the Tour see it coming, yeah, they’ve seen the real intentions coming for a long time, a lot clearer than me. When I talk to Tiger [Woods], when I talk to Rory [McIlroy], I go, ohhhh, I didn’t see that part of it. So there’s a lot more going on behind the scenes and reasons why — leave the Saudis out of it; it doesn’t matter whose three billion dollars it is; if they want to take over the PGA Tour and have us be a feeder system, we’ll pick guys out of college, we’ll pick guys off the PGA Tour and then we’ll have the best golf product in the world. Well, why wouldn’t we defend it? I don’t think we should sit down with them, especially not with [LIV CEO] Greg Norman.”

Never say never, of course. Stranger things have happened, especially when millions of dollars are on the line. But for the time being, at least, Love III is probably right. It’s hard to imagine that the PGA will lay down its sword in order to help legitimize LIV Golf.

[No Laying Up, Golf.com]