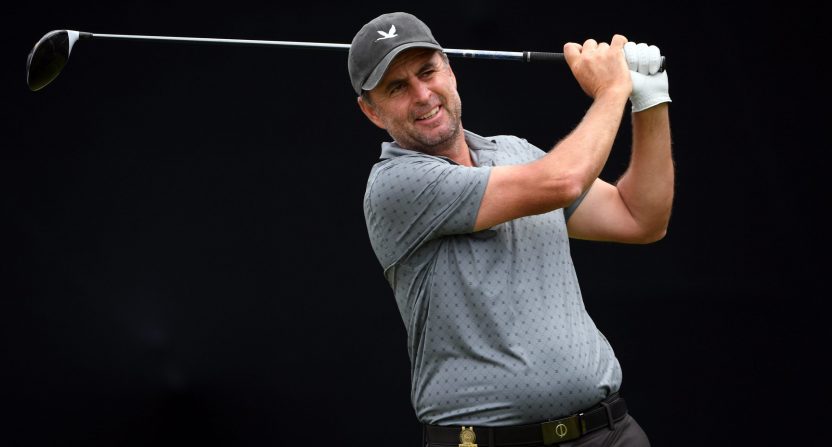 At the conclusion of his second round at the U.S. Open, Richard Bland (affectionately dubbed Dick Bland by golf Twitter) held a solo lead at -5.

A few hours into the evening round and that’s still true, though his lead is no longer solo, he’s atop the Torrey Pines leaderboard ahead of a group of chasers including major winners Louis Oosthuizen, Bubba Watson, and Brooks Koepka, not to mention rising stars like Xander Schauffele.

Bland’s story belies his surname: he’s 48, and he’s played professional golf since 1996. Despite that, this U.S. Open is just his fourth start in a major championship. As many have noted, he’s basically played one major per decade; the 1998 British Open (missed cut), the 2009 U.S. Open (missed cut), and the 2017 British (T22). He’s won just twice as a professional, on the European Challenge Tour (one step below the European Tour) in 2001, and then, somewhat amazingly, in the Betfred British Masters a few weeks ago.

That’s twenty years between wins. Bland has never been ranked inside the top 100 in the world (he’s currently 115th, coincidentally the spot Phil Mickelson won from at the PGA in May.)

Congrats from all over the 🌎!@blandy73 experienced true social media buzz after claiming his first @EuropeanTour title. pic.twitter.com/vdEHu2HA8s

Watching him play today, it didn’t seem fluky; Bland might not have the kind of game that would translate to success weekly on the PGA Tour birdiefests, but his swing was consistent all day, straight and long enough, which is all you need at a firm and straightforward test like Torrey Pines South.

That’s not to say he’s going to go out tomorrow and fire another under par round to make a wire-to-wire win possible. Bland could just as easily be blown out to sea (conveniently it wouldn’t be a long journey.)

But it’s almost impossible not to root for the guy. Some of his post-round answers affirmed that.

On his rhino headcover:

“I’m involved with a charity in South Africa called Birdies For Rhinos, so there’s about 20 of us now, mainly on the European Tour, a few ladies. I think. Justin Rose is involved with it, as well. So every birdie that we make throughout the year we donate some money to help save rhino poaching and what have you.

Animals are all sort of quite close to my heart. Two things I can’t stand is three-putting and animal cruelty.”

Same here, Richard. His answer on what it was like to go two decades between wins, though, was a delightful mix of insight, introspection, and self-deprecation:

“Yeah, but golf is all I know. When times got tough and I lost my card two or three times, I think, what am I going to do, go and get an office job? I’m not that intelligent, I’m afraid. So it was just, right, okay, I’ve always been someone that can get my head down and work hard, and I always knew I had the game to compete on the European Tour at the highest level. I’ve always known that.

But as any golf career, you’re going to have peaks and troughs. Of course you are. But I just think every kind of sportsman, sportswoman, they have that never-die or that never-quit attitude, no matter whether it’s golf or it’s tennis or it’s boxing, whatever it is. The old saying is you get knocked down seven times, you get up eight. I’ve always had that kind of attitude that you just keep going. You never know in this game, you just keep going.”

The odds are certainly stacked against Bland winning. Even now, on top of the leaderboard after two days. But they’re much less stacked than they were Thursday morning.