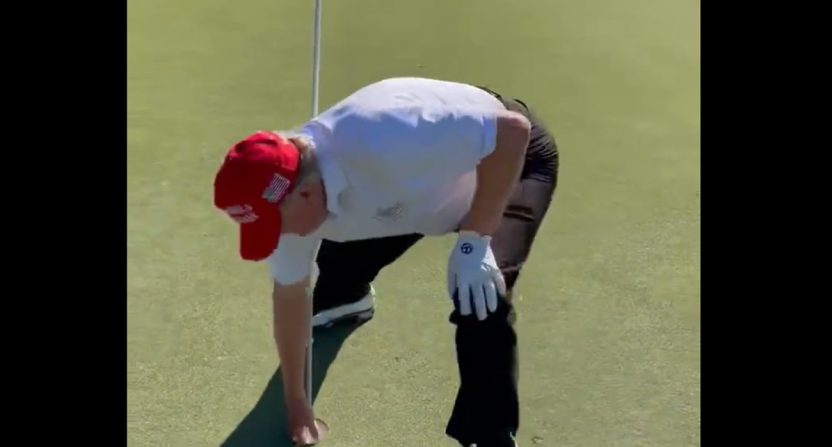 Former president Donald Trump desperately needed America to know the rumors about his hole-in-one over the weekend were “100% true.”

After South Carolina House candidate Tim Swain shared a photo of the former president holding his ball to celebrate a tee shot, reports began to circle that Trump made a hole-in-one during a weekend golf outing on Saturday.

Swain’s picture was met with some ridicule as Trump has a reputation of being a cheater on the golf course, emphasized by sportswriter Rick Reilly who previously wrote the former president “throws it, boots it, and moves it. He lies about his lies. He fudges and foozles and fluffs.”

But as far as this hole-in-one goes, Trump attempted to silence any doubters by releasing a lengthy and boastful statement from his office.

Here's Donald Trump's statement on the hole-in-one he made over the weekend playing with Ernie Els, Ken Duke, Gene Sauers and Mike Goodes. Trump says it was a 5-iron from 181 which "sailed magnificently into a rather strong wind, with approximately 5 feet of cut" pic.twitter.com/vnUYBV1PFS

“Many people are asking, so I’ll give it to you now, it is 100% true,” Trump alleged before he went on to describe the shot in detail. “While playing with the legendary golfer, Ernie Els, winner of four Majors and approximately 72 other tournaments throughout the world, Gene Sauers, winner of the Senior U.S. Open, Ken Duke, and Mike Goodes, both excellent tour players, I made a hole-in-one.”

“On the 7th hole, which was playing 181-yards into a slight wind. I hit a 5-iron, which sailed magnificently into a rather strong wind, with approximately 5 feet of cut, whereupon it bounced twice and then went clank, into the hole.”

Slight wind, strong wind, clank into the hole; Trump gave his best Jim Nantz impression as he recounted the alleged hole-in-one. After the statement was released, Taylor Budowich, who according to his Twitter bio serves as the communications director for Trump’s political action committee, shared video of Trump scooping the ball out of the cup.

45 picking up his hole-in-one on Saturday. pic.twitter.com/dzTdWAdkWe

Trump ended the statement by appearing to mock the affinity he has for himself:

“I won’t tell you who won,” Trump wrote. “Because I am a very modest individual, and you will then say I was bragging—and I don’t like people who brag!”

Considering his lack of self-awareness, it’s hard to confirm whether the line is sarcastic or serious.