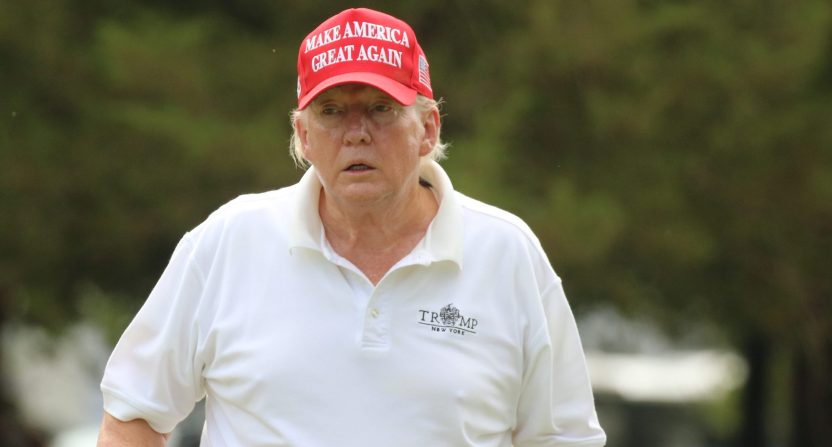 One of the biggest supporters of LIV Golf has been former United States President Donald Trump, who has deep ties to the tour with two of the eight tournaments that they have played thus far taking place at a golf course owned by Trump.

It’s clear that Trump would benefit greatly from LIV Golf becoming a top draw in the world of sports, and it appears that Trump’s son-in-law Jared Kushner tried to set up a huge opportunity for the infamous Saudi-backed tour.

According to John Ourand of Sports Business Journal, Kushner made an attempt to reach out to Paramount, the company that owns CBS, to try and jump-start negotiations for a potential media rights deal for LIV Golf.

A source with knowledge of the situation told Ourand that Kushner made one phone call to Paramount to try and stem these negotiations between LIV and Paramount, which to this point has not come to fruition.

Kushner was reportedly not working under an affiliation with LIV Golf at the time, but it would certainly make sense that he would want LIV Golf to succeed to the utmost degree.

His private equity firm, Affinity Partners, secured a $2 billion investment from Saudi Arabia’s Public Investment Fund, which has been the backbone of funding for the tour.

Kushner’s decision to go after a deal with Paramount is certainly an interesting one considering the PGA Tour’s longtime partnership with CBS over the years, recently signing a nine-year deal with the league which started this season.

That Jared and his wry sense of humor. Or ignorance of Viacom’s current golf TV deals… https://t.co/KvF1FojNgW

A media rights deal seems to be extremely necessary for LIV Golf if they want to be a huge draw within the sports world. To this point in the tour’s brief history, LIV has only brought in viewers from YouTube streaming for their events.

Despite bringing in top golfers left and right like the likes of Cameron Smith, Brooks Koepka, Bryson DeChambeau, Dustin Johnson, and many others, the lack of national coverage should be extremely alarming for the new league.

Having the likes of Trump and Kushner on their side could certainly help LIV’s prospects in doing that, but the PGA Tour remains king as of right now when it comes to media coverage of their events in golf.