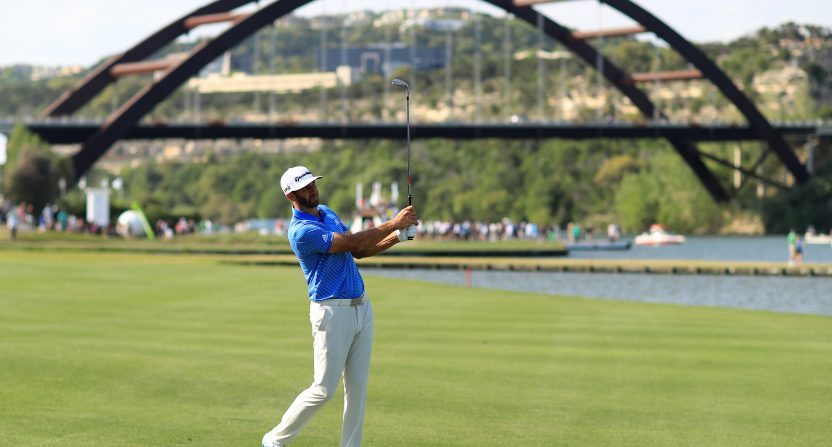 Dustin Johnson is on fire right now, and with the Masters just two weeks away, he’s going to be a heavy, heavy favorite.

The WGC-Dell Match Play field had no real shot this weekend. Johnson blitzed the pack, never trailing in any of his seven matches, and closing out Spanish bomber Jon Rahm on the final hole of Sunday’s championship match for his third win in three consecutive PGA Tour starts.

How is he so good? Well, simply put, he’s just a perfect golfer. He hits it farther than just about anyone else. But unlike some other mashers, Johnson hits it straight enough, too, especially when he’s on. Shorter-but-accurate driver Ryan Moore said this last year about what makes Johnson difficult to beat:

“When that guy gets going, he’s tough to beat. He hits 70 yards farther than me and basically as straight as I do.”

That’s a difficult combination, especially when you add in Johnson’s newfound touch around the greens, and a solid putting stroke on top. Plus, he still retains his trademark mentality, or lack thereof. He’s perfectly built to forget bad shots, to not get too high or too low, to ignore any pressure on or around him.

The incurious stride of a man who has seen a real boat party in his day. pic.twitter.com/kCTOMzd53x

He’s also won a major now, too. With that particular seal broken, it’s reasonable to wonder just how high his ceiling could be. He’s only 32, and if he remains healthy and flexible, there’s no real reason to see him slowing down any time soon.

Johnson certainly didn’t slow down at the Austin Country Club. He blitzed just about everyone in his path; such was the destruction that Johnson didn’t even see the 18th hole until the final match against Rahm. He’d closed his opposition out much earlier than that throughout the week.

Sunday’s final was entertaining; after winning his own semifinal over Bill Haas, Rahm was asked who he’d rather play in the final. Rather than the politically correct answer, Rahm said he’d like to face DJ. He got his wish, too, and for the first nine holes, it looked like the rookie would be regretting not asking for Hideto Tanihara instead, as Rahm was down five holes at the turn.

But Johnson made a few bogeys on the back nine, Rahm refused to go away, and on the eighteenth Rahm had a chance to force extra holes. He couldn’t get up and down from behind the green, though, and Johnson put away the match.

Dustin Johnson defeats Jon Rahm 1UP to win the @DellMatchPlay for his third consecutive victory. pic.twitter.com/at1GgFeqkA

It was still a fantastic week for Rahm, who made it out of group play by defeating his countryman Sergio Garcia, and then blasted his own path to the final. He looks every bit a force, and could make his presence known as soon as Augusta.

A few other things we learned

** Phil Mickelson is having a fantastic year so far. Lefty finished T7 in very entertaining fashion at the last WGC event in Mexico, and now he’s added a T5 in the Match Play, an event at which he’s traditionally struggled, making the weekend just once prior to this year.

He lost to a barrage of Bill Haas birdies, robbing us of a semifinal match against Rahm (who is managed by Mickelson’s brother), but Lefty is going to be a popular pick at Augusta. (Well, he always is, but his time it’ll be quite justified.

** Hideto Tanihara had a hell of a week. Advancing out of a group that included Jordan Spieth and Ryan Moore, Tanihara rode excellent play all the way to the semifinals. He even had an ace in the consolation match against Haas:

Tanihara’s play was good enough to earn him a Masters invite.

** The Austin County Club is a really fun match play course. This event languished at Dove Mountain for years, a course most pros hated, and one that offered fairly bland golf for what should always be a unique and fun event. In Austin, along with the fun views, we’re treated to plenty of risk/reward golf, which really helps to accentuate what makes match play great.

** The format is still not quite perfect. I’m more than fine with match play, and I honestly liked the old 64-man March Madness-style bracket too. The groups are also interesting, and it’s certainly better for TV and the tournament itself that the stars are there for a guaranteed three days instead of a potential one. But it’s still not quite right.

I don’t like half-points, for example. Previously, there were no halves; a match required a winner, so it would head straight for extra holes. Now, though, after 18 holes a half-point is earned, similar to the Ryder Cup. But the Ryder Cup is a team event. Individual match play should result in a winner, and without that, there are instances like Ryan Moore, who halved three matches and was sent home despite not losing.

Removing the half-points could spice things up a bit, and though it wouldn’t solve the problem of dead rubber matches on Friday, it would allow for more playoff golf throughout the event.

Still, it was a fun tournament overall, and the best player won. Hard to complain about that.