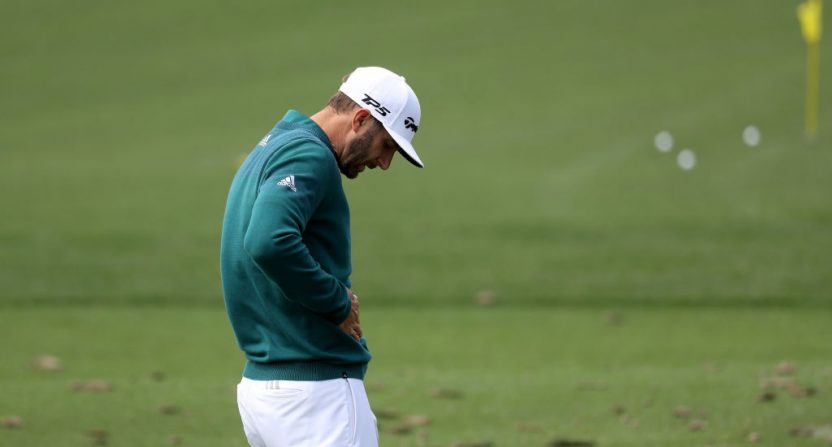 Just before the Masters could get underway, Dustin Johnson hurt his back in a fall at his rental home. Despite the fall, Johnson, among the favorites to win a green jacket, was committed to giving it his best effort in Augusta. Unfortunately, before teeing off, Johnson was in too much pain to continue. He quickly pulled out of the Masters, and he was not pleased about it.

“It sucks,” Johnson said, according to Bob Harig of ESPN. “Obviously, I want to play more than anything. It hurts. I was doing everything I could to try and play.”

And he apparently had, including going through a lengthy range session:

Johnson was a heavy betting favorite:

More money was bet on Dustin Johnson to win the Masters than any other golfer at multiple Las Vegas sports books. Johnson has withdrawn.

As Johnson never teed off, he technically received  “Did not start” instead of a withdrawal, which means some sportsbooks will be refunding futures bets on DJ. But every betting site or casino operates differently. As RJ Bell notes, the discretion on whether to issue a refund or not is a matter of choice by each sportsbook.

Dustin Johnson was bet heavily … lots of questions. No widely applicable answer: Some sportsbooks refund on withdrawals, others don't.

Fortunately, at least one sportsbook (Sky Bet) is already making it known they will refund customers who placed money on Johnson:

We're refunding all outright bets placed on Dustin Johnson after he withdrew from #TheMasters pic.twitter.com/ULyhKH4Wcy

Bovada was a bit less clear with their tweet, but it sure sounds like anyone who bet on Johnson through Bovada is going to be receiving a refund:

Dustin Johnson may not play today due to a nasty fall down the stairs. What does that mean for your bets? Read more: https://t.co/cbJeqzhwNo pic.twitter.com/jlGWIno8JH

The link from Bovada explains “Futures wagers all have action, complete or not,” and “Outright wagers on players that do not tee off are void and stakes are refunded.”

Johnson’s decision to not even try an opening tee shot may have saved gamblers millions in losses (costing sportsbooks millions too, of course.)

All thanks to a set of stairs heading into a rental house garage.