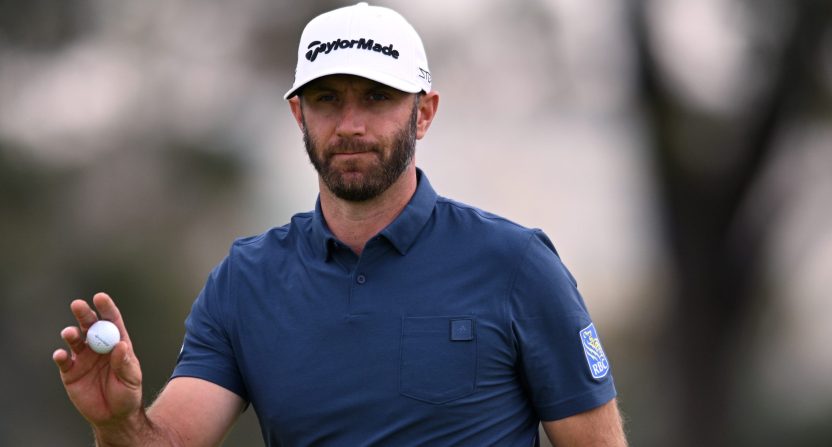 The golf world has been abuzz in recent days about the Super Golf League and its potential to disrupt or even overtake the PGA. Some of the sport’s biggest names have hinted at (or outright discussed) interest in leaving the long-running golf association to align themselves with the breakaway golf league.

Dustin Johnson will not be one of them. The two-time major champion reiterated his commitment to the PGA on Sunday with a statement.

“Over the past several months, there has been a great deal of speculation about an alternative tour; much of which seems to have included me and my future in professional golf.

“I feel it is now time to put such speculation to rest. I am fully committed to the PGA Tour. I am grateful for the opportunity to play on the best tour in the world and for all it has provided me and my family.

“While there will always be areas where our Tour can improve and evolve, I am thankful for our leadership and the many sponsors who make the PGA Tour golf’s premier tour.”

With Johnson’s commitment, that means all of the current top eight players in the world have indicated they have no plans to join the Saudi-backed league. Other top names, such as Brooks Koepka and Jordan Spieth have also thrown their commitment behind the PGA.

While Phil Mickelson has been pushing strongly for consideration of the new league, Bryson DeChambeau remains the only major champion under 30 who has yet to commit to playing in the PGA. (UPDATE: Bryson also publicly committed to the PGA a little while later).

The golf world had some strong reactions to the announcement, especially in terms of what it means for the Saudi-backed league and the fact that it came via the PGA itself.

This is the soccer Super League all over again. It's falling apart not thanks to the PGA Tour bending to leverage, but because the public backlash is such that it's going to be untenable. https://t.co/hRYcpkjXla

DJ isn’t the sharpest but by God he has more brain cells than the saboteurs combined. https://t.co/4faBY5690Z

I find the means through which this message was relayed far more interesting than the message itself. https://t.co/xBEFbImZDC

Hmmm, this tweaks the landscape for an alternative tour. https://t.co/KKDvzbMHoj

A major name closes the door on leaving the PGA, as Trump tries to partner w Saudis for events that would damage PGA and benefit his properties https://t.co/7cFPefEEFb

Had a foot in both camps until the critical moment, then saw the writing on the wall. DJ might actually be the smartest man in the room. #Dominos https://t.co/aqfodtouC9