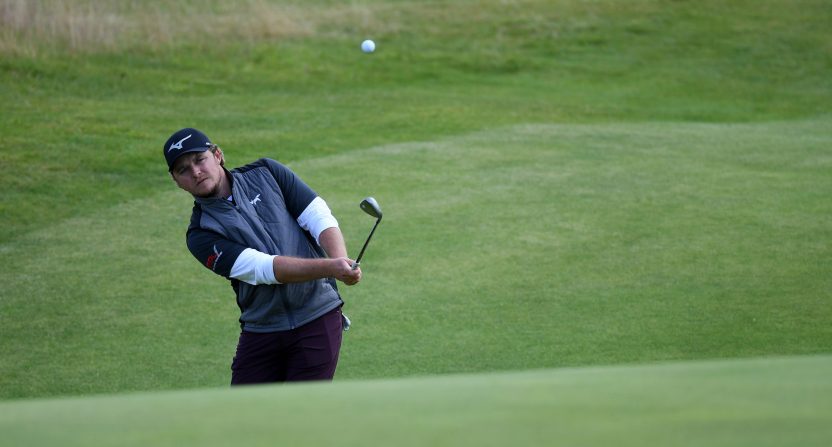 In the 1996 movie “Tin Cup,” Kevin Costner’s Roy “Tin Cup” McAvoy approaches the 18th hole on the final day of the U.S. Open with a chance to win it all. Instead of playing it safe he decides to try to get all the way to the green and ends up dunking his ball in the water hazard. He tries again and the same thing happens. Again. And again. Until he’ suddenly on his 12th and final shot before he runs out of balls. He ends up putting that one in the hole and walking off triumphantly in spite of shooting a 12.

Pro golfer Eddie Pepperell’s day on Saturday didn’t include all that fanfare, but it did end in roughly the same way. Pepperell was forced to leave the golf course at the Turkish Airlines Open when he ran out of golf balls and was disqualified.

Great to be back in Turkey. Typically great weather, on a course lined with trees… What more could you want. Also, I’ve just been made the ‘Chef’s Special’ Asian dish for lunch @MontgomerieMaxx… Brilliant hospitality 😁🤤.

Per Golfweek, the 28-year-old walked onto the fourth green at two over for the round and at even par for the tournament. He decided to go for the green with his second shot on the par-5 hole and put it right in the water. After taking a one-strike penalty he tried again for his fourth shot. Same result. Same for his sixth and eighth shots, at least. All we had to go on was the word of playing companions Martin Kaymer and George Coetzee, who lost count of exactly how many shots Pepperell took and dunked. But he eventually ran out and walked off, unable to continue.

“Eddie hit his shots to the green, then came over to tell us he had run out of balls,” Kaymer said.

“Then he walked off. I thought he lost four or five. We are about 80 percent sure it was five, 20 percent four. He was quick, so it was hard to keep track.

“He did not ask if he could borrow one from me or George. It did not look like he wanted to play. He did not putt with his putter on the third hole; he putted with a wedge. So there was a lot happening.

“I have never seen anything like that before. I only watched it on television, in ‘Tin Cup.’ This is the first time I have seen it live.”

Pepperell is apparently the first PGA player to have to vacate an event after balling-out. Sweden’s Anders Forsbrand was disqualified during the 1994 French Open after losing nine balls on the 18th hole at Le Golf National.

Pepperell had quite the 2018, winning the Qatar Masters and Sky Sports British Masters while also finishing tied for sixth at the British Open. 2019 hasn’t been as kind to him, but chances are it’s all uphill and out of the water from here.