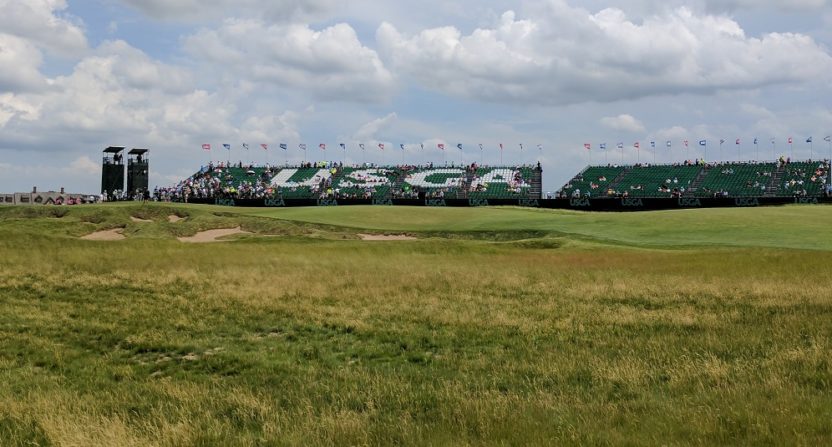 You’ll be right, but you also won’t get the whole picture. The biggest and best television cannot possibly convey the size of the course, nor can it come close to accurately representing the topography. And what a property it is. 650 or so acres of fescue grass, temporary grandstands, tents and more. 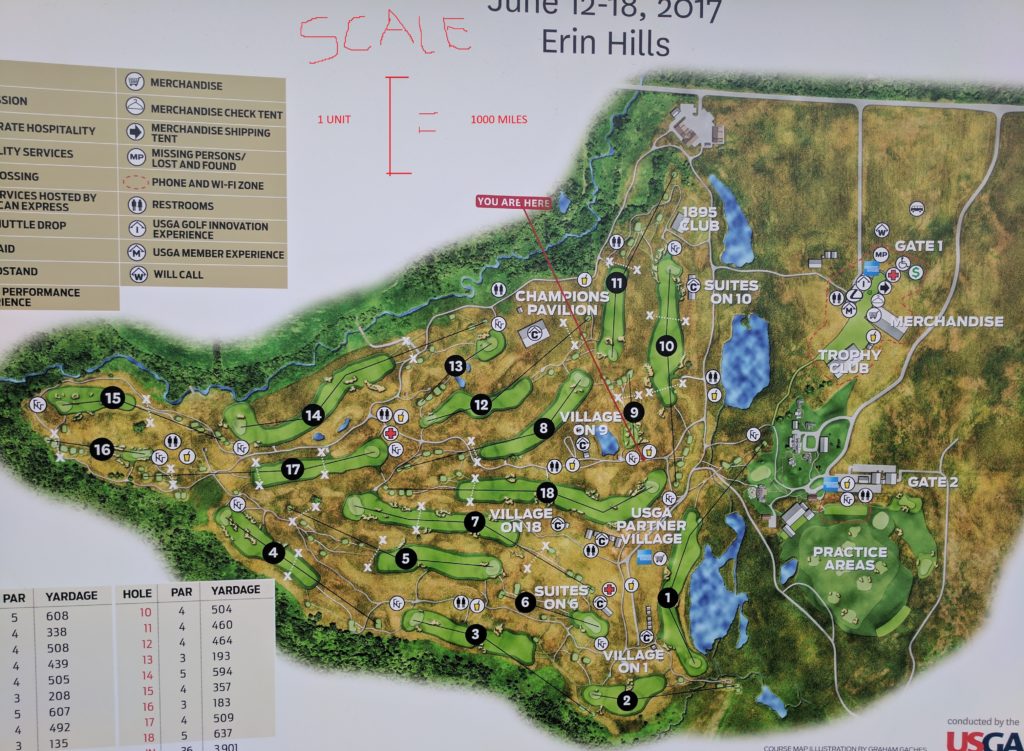 You might, in other previews, read some variation on the theme of Erin Hills being in the middle of nowhere, which is only true if you consider 30 minutes outside Milwaukee to be the middle of nowhere. (I’m not necessarily saying that’s an invalid opinion.) It’s accessible only via a succession of two-lane roads, and once at the property, the gravel drive back to the media lots was extensive and winding. You can see the culmination in the lower right corner of that map, going past the edge of the practice area and finishing near Gate 2.

The effect is startling.

You emerge from a highway through fields and forests (with only the mostly adequate tournament signage and at least one roadside lemonade/refreshment stand manned by some children offering a hint of what’s nearby) and then a rough road through a canyon comprised of chain-link fencing adorned with an endless supply of USGA-logo windbreak material to find a practice area that could seemingly be a par 3 course unto itself, with players putting and chipping so close by that the golf etiquette snob within me wanted to slow down so as to minimize the crunch of gravel underneath my tires.

“Volunteers” are everywhere, more than 4,800 in total. Volunteers is in quotes because it costs $175 to do it, but everyone I encountered seemed more than happy to be there, on top of being genuinely helpful and pleasant, right down to the two kids staffing the parking lot, directing cars in between pantomiming a baseball game with their batons and an umbrella. Then again, it was only Wednesday. Maybe the thrill wears off by the weekend.

I’d never attended a U.S. Open before. My overwhelming takeaway: it’s a massive operation being run very, very smoothly. The USGA has done this so many times that there are only a few variables remaining each year. The weather is one, and Wednesday saw massive thunderstorms roll through, disrupting the afternoon practice sessions and sending fans to their cars early.

That picture above illustrates one of the problems with Erin Hills as a tournament venue: there’s just so much space. While that’s a non-factor for a television audience, it’s a pretty big deal for spectators at the event. The fairways are so big that even right alongside a rope, you’re very much removed from the action. Even the tee boxes are generally cordoned off, and typically plateaued; I stood about as close as you can possibly get for Dustin Johnson’s tee shots off the 18th on Wednesday, and I couldn’t see the ball.

This is the nature of a modern golf course, with plenty of land; the classic designs are by necessity much tighter, for the most part. Here, and elsewhere, there’s so much room and so many potential golf holes on the property that when designers are choosing the best 18-hole routing from a golf perspective, it’s not always going to be a compact hike.

Or, to put it more succinctly:

I get modern golf architects want to use the best contour of land possible for each hole. But walking 200+ yards to get to next tee? ?

The USGA has to please plenty of parents. The players, first and foremost, are a demanding bunch, and the quality of the golf on display is paramount. Television comes next, and Erin Hills should absolutely pop on TV; the wet Midwestern spring, the fact that the course was closed for the entire year to save wear and tear, and the undeniable beauty of the property should lead to some very attractive camera shots.

There’s also plenty of space here for hospitality tents, merchandise venues, a plethora of concession options, and various sponsored locales, all of which helps bring in the revenue to float the organization. (The overhead must be insane; the media center spread alone was impressive enough, not to mention the facilities themselves. It’s all top-notch, there’s no denying that.)

It just feels a bit surreal. If I were walking the course as a player, I doubt I’d notice many of these things. The areas between the holes wouldn’t really come into play, except as a welcome accessory to solitude, real or imagined. But from the sides and backs of fairways, and even around the greens, it was tough to get a sense for what was happening. Get close enough to watch Scott Piercy hitting a few hop-and-stop chips onto the putting surface, and you couldn’t see the stick. Move up the hole towards the green, and you lost sight of Piercy. And he was only a few yards shy of the fringe.

This sounds, perhaps, a bit like a complaint, and maybe it is. But this is also a unique opportunity for the USGA, and for Erin Hills, and for Wisconsin golf. Presumably, if all goes well, Erin Hills would be in line for another U.S. Open, and that would probably be a good thing, if for no reason beyond the fact that it does seem to provide a golf experience that can only be found in the United States, no matter what the course’s somewhat-unfortunate faux-Irish trappings would have you believe.

It’s a big, bruising, sprawling layout of rolling Midwestern glacial till, designed and built with an eye unafraid to reach for the spectacular, to the point of flirting with bad taste. Quintessential Americana, right down to the gravel entry drive in the middle of the Wisconsin woods. It would slide in nicely alongside the tight, Golden Era designs like Shinnecock on the East Coast, and the seaside views of Pebble Beach on the West Coast. If it goes poorly, it’ll likely be relegated to the rearview mirror alongside Chambers Bay, and the USGA will continue searching for the next new thing.

Enjoy it on television, if that’s how you’re watching it, and know that the best seat in the house is likely the literal best seat in your house, at least when it comes to seeing every bit of the action. But you won’t be able to see how big it all is, from the kids parking cars all the way to the lunar-like landscape of peaks and valleys. It truly is a spectacle, perhaps unlike any course in the country.

When it comes to a national championship, that has to count for something.