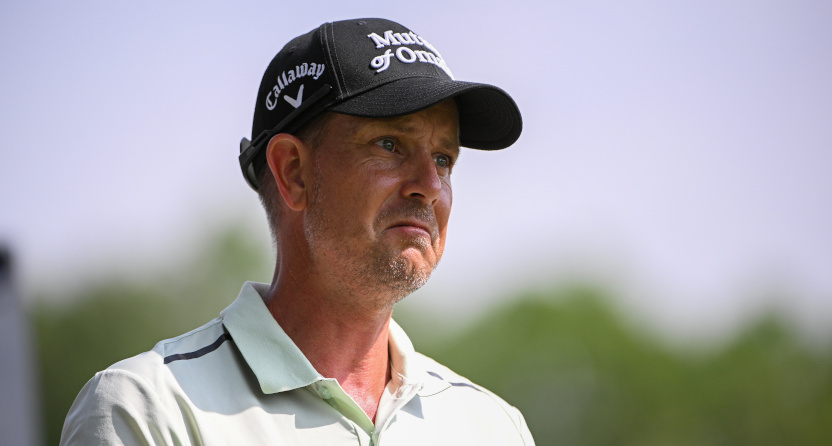 Four months after being selected as the European Ryder Cup team captain for 2023, Swedish golfer Henrik Stenson appears set to leave the DP World Tour (the former European Tour) for controversial Saudi-backed series LIV Golf. And that looks likely to lead to him being stripped of his Ryder Cup captaincy. However, Stenson’s departure doesn’t appear assured yet, with reports emerging Monday morning of a last-chance meeting between Stenson and DP World Tour officials Tuesday.

Sky Sports’ Jamie Weir reported Sunday night on Twitter that Stenson (seen above at the PGA Championship in May) is “expected to join LIV Golf imminently and to be stripped of the Ryder Cup captaincy.” He also said on air (at 2:15, as part of a larger segment discussing Open Championship winner Cameron Smith and others in rumored talks with LIV)  “I have it on good authority that Ryder Cup captain Henrik Stenson could be announced very soon indeed, and that would create an almighty headache for Ryder Cup Europe; they would be stripping Henrik Stenson of the captaincy and left to look for a new captain.” Martin Hardeberger of Swedish sports newspaper Expressen also reported that a source said Stenson is “almost ready” to join LIV. But Monday, James Corrigan of The Telegraph reported that DP World Tour chief executive Keith Pelley and DP World Tour deputy CEO/European Ryder Cup director Guy Kinnings are set to meet with Stenson Tuesday:

Henrik Stenson will meet with the DP World Tour on Tuesday as speculation increases that Europe’s Ryder Cup captain is about to join the Saudi rebel circuit.

…Stenson missed the cut at St Andrews where he had the chance to deny the story but he would only utter a “no comment”.

…Stenson’s refusal to kill the rumours stone dead, as well as the ever-louder whispers, convinced the DP World Tour – formerly the European Tour – to seek out the 46-year-old for assurances, with a meeting set for Tuesday. As well as Tour chief executive Keith Pelley, it will also involve his right-hand man Guy Kinnings.

Corrigan also has much more on the contract Stenson signed with the Ryder Cup, which came after reports he had been mulling a $30 million offer from LIV:

Captains are always asked to sign a contract with Ryder Cup Europe, but Telegraph Sport learnt that this time as the selection process unfolded Pelley inserted a clause that obviously pertains to LIV. “The successful candidate will be expected during his tenure to commit to supporting the Ryder Cup and the DP World Tour exclusively,” it reads, “and therefore, by extension, not supporting or promoting other properties [including, without limitation, other Tours, Leagues, Series or Competitions].”

Stenson, himself, acknowledged this commitment in his unveiling press conference. “There’s been a lot of speculation back and forth, but I am fully committed to the captaincy and to Ryder Cup Europe and the job at hand,” he said.

“The captain does sign a contract. He’s the only one that does that. Players and vice captains don’t. But the captain has an agreement and those agreements are between Ryder Cup Europe and the captain, so I’m fully committed to my role as a captain and working hard towards the result we want in Rome.”

Back in March when Stenson was announced as the European captain, he had lots to say about how much the Ryder Cup meant to him:

“I am absolutely thrilled and delighted to be the European Ryder Cup Captain – it is a huge honour and I was humbled to get the call confirming the news. I would like to thank the selection panel for believing in me and will say to them, and every European golf fan, that I will do everything in my power and leave no stone unturned in the quest to get the Ryder Cup back in European hands.”

“The Ryder Cup is golf, and sport, at its very best. I got goosebumps every time I pulled on a European shirt as a player and that will be magnified in the role of Captain. While it is great for me personally, it is also great for my country and all the players from Sweden who have played for Europe with such distinction since Joakim Haeggman became the first in 1993.

“When I started out as a professional golfer, it was beyond my wildest dreams that, one day, I would follow in the footsteps of legends of the game such as Seve and be the European Ryder Cup Captain. But today proves that, sometimes, dreams do come true.”

However, several European players who have joined LIV ( Sergio Garcia, Martin Kaymer, and Lee Westwood in particular) have been arguing that they should still be able to play in the Ryder Cup. And no official decision there appears to have been announced yet, with reports of behind-the-scenes arguments both ways, and with DP World Tour golfer Jon Rahm recently publicly lobbying for Garcia’s inclusion in particular.

Stenson’s move to LIV Golf would likely be most notable for his Ryder Cup role. He has had significant on-course success since turning professional in 1998, reaching the #2 spot in the Official World Golf Rankings in 2014, winning the Open Championship in 2016, and posting six PGA Tour and 11 European Tour/DP World Tour wins over the course of his career, but he’s battled injuries over the past few years and hasn’t posted great results. His last particularly notable performances were a 3-0-0 record at the 2018 Ryder Cup, a tied-for-fifth finish at the Masters that year, a tied for sixth finish at the U.S. Open that year, and a Hero World Challenge win in 2019. But landing the current European Ryder Cup captain would certainly draw some more attention to LIV Golf.