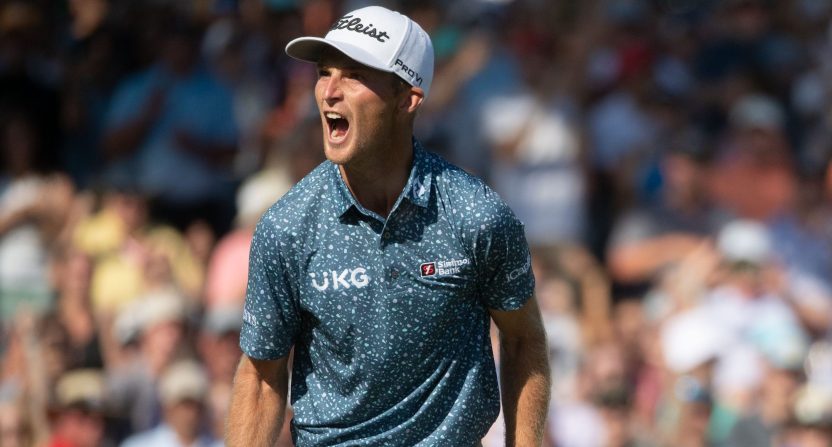 In what’s been a weird PGA Tour season, it’s only fitting that the FedEx Cup opener — the FedEx St. Jude Championship — ended in unusual fashion. Will Zalatoris earned his first win, prevailing in a crazy three-hole playoff over Sepp Straka.

After Straka missed a putt to win in regulation, he and Zalatrois went back to the 18th hole for a sudden death playoff. The first hole was fairly benign. Both golfers made routine pars without much drama. With that, they returned to the 18th hole for the second playoff hole. That’s when things got weird.

Zalatoris missed the fairway. His drive hit a cart path and nearly went out of bounds but hit a tree to stay in. Straka, meanwhile, nearly hit his ball in the water. But it stayed up.

Playoff drama at its finest.

Both players miss the fairway on the second playoff hole. pic.twitter.com/5NVBIxPor7

Unfortunately, Straka didn’t have much of a stance. So, after considering hitting his shot with a foot in the water, he took a drop while Zalatoris punched out. Both hit their third shots into the green. Zalatoris made a clutch putt to save par and Straka did the same.

With that, they went to the par-three 11th hole, where things got even nuttier. Zalatoris’ tee shot was short and appeared bound for the water. But it bounced around on top of the rocks in front of the green and eventually settled. Straka was not so fortunate. His tee shot narrowly cleared the rocks but bounced back and after one bounce on the rocks fell into the water.

Golf is a game of inches. pic.twitter.com/9ncFqNNdWX

Zalatoris’ break was initially negated by the fact that he still had to drop his ball, putting him in the same boat as Straka. But Straka struggled. After dropping his second shot, his third shot found a bunker behind the green. While Straka’s bunker shot was close, the door was open for Zalatoris. Get up and down from the drop zone for bogey and win your first PGA Tour event. He did just that.

Every shot from the third and deciding playoff hole @FedExChamp. pic.twitter.com/rZclieVlSf

The bonkers playoff got the attention of plenty in the golf world.

Zalatoris and Straka are MUST WATCH TV RIGHT NOW

This third playoff hole summed up in one word…. pic.twitter.com/HapoNEMpBY

If you want to win on the PGA Tour, clearly you've gotta learn how to get the ball to stop on a rock wall.

This is actually the craziest playoff I can remember. Just pure chaos.

Remember when people were saying this tournament was boring and the leaderboard sucked LOL. What a playoff. I love golf.

Next week, the FedEx Cup will shift to Wilmington, Delaware for the BMW Championship. We can only hope that tournament is as wild and unpredictable as this.