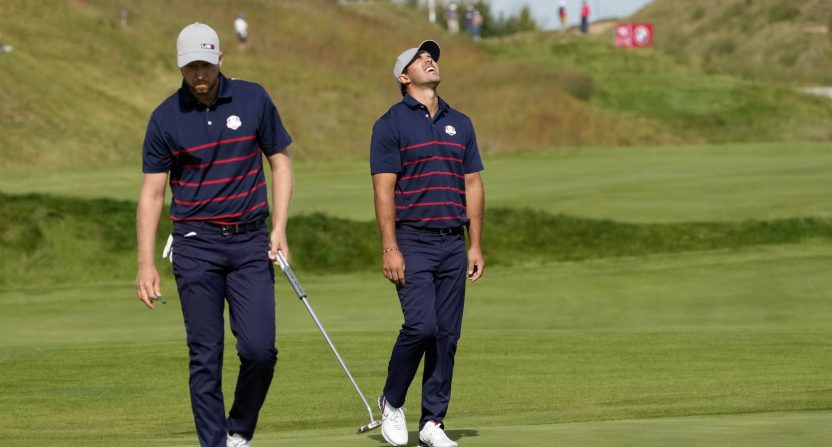 It’s been a rough season so far for the Florida State Seminoles. This once-proud college football program is 0-3 for the first time since 1976. While their loss to Notre Dame was respectable enough, a shocking last-second loss to Jacksonville State left them reeling, and Wake Forest was able to enjoy some revenge for all the years FSU has beaten them. Head coach Mike Norvell’s seat is extremely hot at the moment and they still have a schedule that includes Louisville, North Carolina, Clemson, and Florida.

All of which is to say that they don’t need to be kicked, they’re already down. But that didn’t stop Golf Channel broadcaster Paul Azinger, a Florida State alum himself, from getting in his own dig.

Brooks Koepka and Daniel Berger are paired up at the Ryder Cup today, which is notable because they both went to college at Florida State. The duo defeated Europe’s Lee Westwood and Matt Fitzpatrick, 2 and 1, earning some much-needed points for the American side.

When Koepka tapped in the winning putt, Azinger didn’t miss a beat, who added “first win of the year for Florida State.” Ouch.

“First win of the year for Florida State.”
👨🏻‍🍳 😚 pic.twitter.com/OI7PwY4AqK

*Koepka and Berger win their match*

“First win of the year for Florida State!” pic.twitter.com/f0x35qVd61

TV commentary as Brooks Koepka and Daniel Berger win their morning foursome at the Ryder Cup: “First win of the year for Florida State” 💀

Who knows, maybe this effort from the FSU golfers is exactly the kind of motivation the FSU football needed to get it together this season. And if they don’t, well, Florida State fans can be happy to know that they’re talkin’ bout the Noles this weekend, at least.