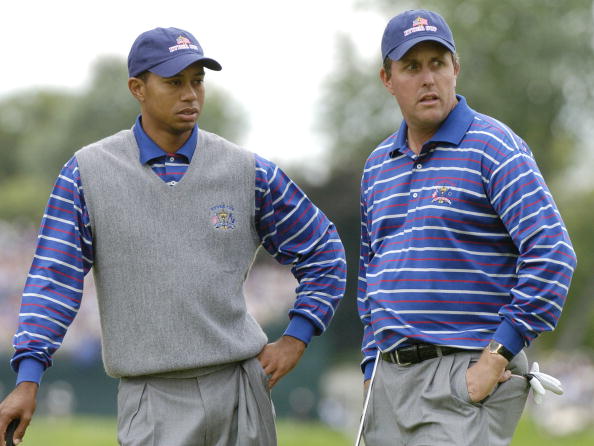 Tiger Woods vs. Phil Mickelson might not have ever lived up to Arnold Palmer vs. Jack Nicklaus, but the most high-profile rivalry in modern golf might be about to go to the next level.

According to Golf.com, Woods and Mickelson almost went head-to-head in a winner-take-all, 18-hole showdown in Las Vegas on July 3. In what would have been a prime-time special, the two biggest names in modern golf would have played for a $10 million prize but the logistics, including a major network and corporate sponsors, didn’t quite come together.

However, that doesn’t mean it’s not going to happen, at least, according to Phil.

“We’re working on a different date. I thought it was done for the 3rd but obviously, it wasn’t.”

Mickelson started talking up the idea in April after the two rivals played a practice round together at the Masters. At the Players Championship a month later, the two were paired up against one another and Phil later said, “The excitement that’s been going on around here, it gets me thinking: Why don’t we just bypass all the ancillary stuff of a tournament and just go head-to-head and just have kind of a high-stakes, winner-take-all match. Now, I don’t know if he wants a piece of me, but I just think it would be something that would be really fun for us to do, and I think there would be a lot of interest in it if we just went straight to the final round.”

When asked about the possibility, Woods added, “I’m definitely not against that. We’ll play for whatever makes him uncomfortable.”

The details on how and when this spectacle might eventually come together remain unclear. Still, there do seem to be some specifics that will be included. Both players are apparently okay with wearing microphones, which could lead to all sorts of smack talk and insight being shared with the masses. And Shadow Creek in Las Vegas remains the preferred place for the showdown to take place. Mickelson also says that he’d like these kinds of match-ups against Woods to turn into an ongoing thing, a bit like a late-career traveling Vegas tour where the two aging stars play some golf, jab each other, and share stories along the way. There’s even the possibility that it becomes something other golfers can get involved in as a kind-of informal tournament or league.

As for whether or not winning $10 million is ultimately a big deal for either golfer, Mickelson seems to feel like a lot of money is still a lot of money, no matter how much you have in the bank.

“It’s a ridiculous amount of money. No matter how much money you have, this amount will take both of us out of our comfort zone.”