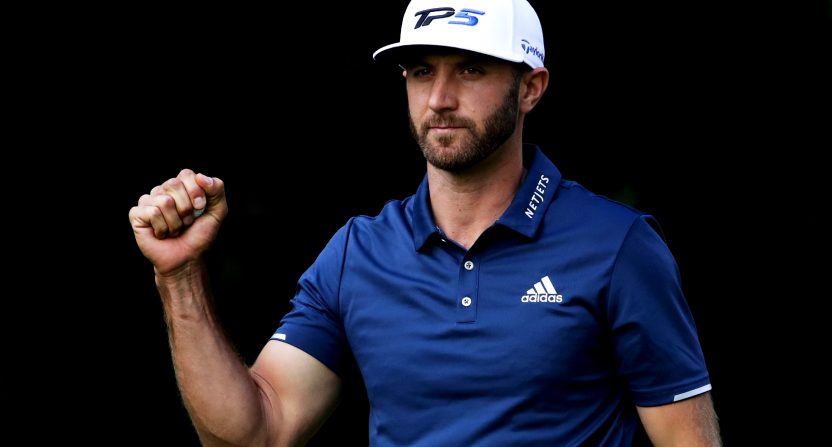 While everyone will be focused on that other March Madness this week and weekend, golf has its own version ready to go, as the WGC-Dell Match Play event begins Wednesday in Austin.

I love match play. One-on-one golf that rewards risk-taking (if only by punishing disaster to a lesser degree than stroke play), it’s a format that isn’t relevant much anymore, outside of this tournament, the Ryder Cup, and amateur events.

But it’s a welcome change of pace from the week-in/week-out stroke play events that dominate the PGA Tour. Stroke play probably makes for better viewing year-round, and is likely a better way to test full fields of pros, but it’s great that match play exists at least once a year, twice in Ryder Cup years.

(Yes, I’m aware the President’s Cup is this year. No, I don’t care about it. At least not in March.)

Match play is kind of like a knuckleball pitcher. With just one or two of them at any given time, it’s exotic and quirky. If every pitcher started throwing knucklers, it’d get old very quickly. But as a rare treat, it’s fantastic, and creates moments of drama that make golf riveting. (It’s unfortunate that in the new spot on the calendar it goes up against the NCAA Tournament; back when it was played in February, the WGC-Match Play had much less sporting competition.)

The format is the same as last year, when Jason Day defeated Rory McIlroy in a fun semifinal before taking down Louis Oosthuizen 4&3 to win the championship:

16 groups of four golfers, drawn from seeded pods. The players play round-robin matches over the first three days, receiving one point for a win, and a half-point point for a draw. The winner of each group moves on to the weekend round of 16, where things are once again single-elimination, with a champion being crowned Sunday.

Match play is in some ways unfair; there are going to be golfers eliminated during the group stage despite playing better than a few group winners. But that’s the nature of events utilizing this World Cup-like structure, and it’s generally a bit more fair than the old single-elimination tournament. (Though that did have its charms, and was likely more fair to the top seeds, at least, though the difference is negligible.)

The field is incredibly strong; it’s ostensibly the top-64 players in the world, though a few have dropped out this year, as it falls in a very congested part of the calendar. Henrik Stenson, Rickie Fowler, Adam Scott, Justin Rose, and Adam Hadwin are skipping this year, which is unfortunate but understandable. (Stenson cited the format as having played a part in his decision.) But that still leaves an incredible field.

The effect of the system is such that predicting group winners is a very random thing. Last year,  I got seven correct and I considered that a pretty big win. Let’s go group by group again, and then try to break down the eventual bracket. (Overall seed in parentheses.)

No need to waste much time here. Johnson reached the quarterfinals at this course last year, and his game is in even better form now. DJ.

No need to waste much time here. Rory reached the semifinals at this course last year, and his game is in even better form now. Rory. (Though, actually, to waste some time: Woodland is from Texas, reached the finals a few years ago, and lost to McIlroy then, so you never know.)

Jason Day won on this course last year, and though this group has a few dangerous players (Leishman won this past week at the Arnold Palmer Invitational, Westwood is a solid match play player when he can make a putt, and Perez is fiery enough to beat anyone) it’s hard to go against that track record. Chalk again.

This is a tough draw for Matsuyama, who played well at last year’s event (going 2-1 in his group) but still didn’t make it to the tournament rounds. Oosthuizen seems due for his semi-regular popup showing, plus there’s last year’s success to consider as well.

Also 2018 Ryder Cup captain Jim Furyk is there, just waiting to play well enough in a WGC to start up the “Jim Furyk as playing captain?” debate no one should be having, for obvious reasons.

I don't know guys. Should the worst Ryder Cup player ever not only captain the team, but also play on it? It's a tough one. https://t.co/1Nk3DN3HXD

Sure, let’s go Furyk, because that’s the kind of annoying conversation that always seems to crop up. Plus he tends to play well until the weekend these days.

And here, we have my first and only somewhat homer-ish pick of the tournament, as I’m going with Ryan Moore to advance. It’s not purely because I’m the Internet’s biggest Ryan Moore water carrier; though Jordan Spieth has experience from college at the Austin Country Club, as well as experience getting out of his group last year, Moore has a solid record of match play, including clinching the Ryder Cup for the United States last year.

Plus Moore reached the quarterfinals at the 2016 edition of this event. And if that’s not enough, here’s Spieth himself speaking after last night’s draw:

“U.S. Amateur champion and match-play wizard — lovely,” Spieth said about Moore, whom he described as “top five of most difficult guys to play.”

The Japanese players are obviously talented, but like all players here via the Asian tour, they tend to have somewhat inflated world rankings. I’d expect this group to come down to a well-played match on Friday between Moore and Spieth; both players have a similar grinding mentality, and it could be a lot of fun. Maybe even extra holes. But I think Ryan edges past.

Sergio has a long and successful match play history, but I’ll go ahead and go with the younger and even more exciting Spaniard, Jon Rahm.

Thongchai Jaidee always makes WGC events, and aside from a quarterfinal appearance in 2010 at the Match Play, has very little to show for it. (Again, Asian Tour.) Could this be his year?

An all-American group, with US Ryder Cup hero Patrick Reed at the fore. Ordinarily the Koepka-Reed Friday match would look like a fantastic one; Koepka reached the quarterfinals last year, after all. Unfortunately Koepka is in a hell of a slump, having missed four cuts in six events in 2017, with the other two finishes no better than T42. He might be living proof that Nike really did make some golfers better. He’ll find it again, but not in time to beat Reed this week.

Kisner and Dufner are also solid players, but Reed just seems to live for this format; he went 3-0 in group play last year, including a decisive win over Phil Mickelson.

Bill Haas is generally a bland pick, but it’s a bit of a bland group, so let’s go for it.

An made it out of the group last year, but Paul Casey feels due to make another run at this event. Joost Luiten would win a name bracket, though.

Tough group. Bubba Watson is struggling with his putter, and though it could come back at any moment, this is a tough format. Pieters is a great young player, who shined at the Ryder Cup in a similar format. Piercy and Vegas can both make birdies, though Piercy’s been off form as of late. Vegas could pull an upset, but Pieters is the safest choice.

Listen, who knows with Phil? He played well here last year, running up against Patrick Reed. He swashbuckled his way around the WGC event in Mexico, including making some of the most ridiculous par recoveries ever.

He’s never really been that close to winning a Match Play title, but let’s go ahead and give him this group.

Snedeker is a very tough out in match play, because he can absolutely drain putts from anywhere. Combine that with a lower seed at the top and lowish seeds at the bottom, and I think Sneds advances.

Matt Kuchar always plays well in these events. But so does Zach Johnson. And Tommy Fleetwood is English, which automatically makes me respect his match play game more, for no real reason. I’ll say Kuchar advances, because he really almost always does.

These are almost certain to go wrong, but hey, it’s a bracket! Let’s have fun!

Is that set of outcomes likely to happen? Not at all! DJ and Rory are obviously on fire right now, and both can play this course well, but it’s such a tricky format. Anything can happen, which is why this is going to be a lot of fun.

Also, if Moore faces Mickelson in the final or even the consolation match, I can probably just go ahead and retire from golf-watching, because I’ll never have more fun.

Golf Channel coverage starts Wednesday-Friday from 2-8 PM Eastern, and then continues on Saturday and Sunday morning at 10 AM Eastern, with NBC picking up the afternoon and evening hours on the weekend.