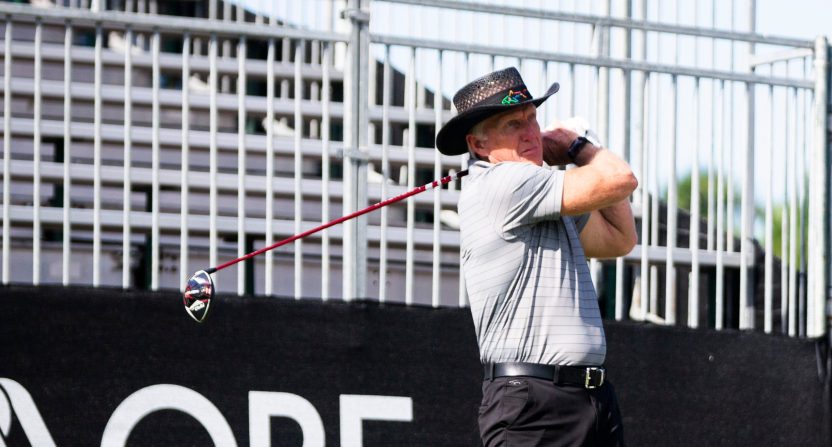 If you thought Phil Mickelson’s rationalization for wanting to play in a Saudi government-backed golf league even though it’s understood and widely reported that Saudi crown prince Mohammed bin Salman ordered the murder of a journalist, wait till you get a load of Greg Norman.

Mickelson previously found himself in hot water after saying that he was okay with getting involved with the backers of the LIV Golf series because even though they are “scary motherf**ckers” whom “we know… killed [Washington Post reporter and U.S. resident Jamal] Khashoggi and have a horrible record on human rights” and that “they execute people over there for being gay,” it was okay because “this is a once-in-a-lifetime opportunity to reshape how the PGA Tour operates.”

After saying that, he was condemned in many corners of the golf world and has been taking time off from the PGA. He’s expected to return for next week’s PGA Championship but the tour’s recent decision to disallow any members to play in LIV events could cause him to have to choose.

Greg Norman, who is CEO of LIV Golf, has been very outspoken against the PGA as he’s tried to attract their top stars to come to play with them instead. He’s also working overtime to justify working for the Saudi government. In a recent interview, Norman discussed the murder of journalist Jamal Khashoggi and decided to try and hand-wave it away.

Norman, the frontman for the series, said: “Everybody has owned up to it, right? It has been spoken about, from what I’ve read, going on what you guys reported. Take ownership, no matter what it is. Look, we’ve all made mistakes and you just want to learn from those mistakes and how you can correct them going forward.”

A UN special rapporteur and the CIA have claimed that Mohammed bin Salman, the Saudi crown prince and PIF chairman, sanctioned the killing. Bin Salman has denied the allegation but said that he took “full responsibility” as a leader of his country.

‘Get over it, it was just a mistake.’ That’s essentially what Norman is going with. For a government-sanctioned murder. The audacity is off the charts.

Chief Executive of LIV Golf Greg Norman says that LIV Golf Investments is independent and will not answer to the Saudi government or Mohammed bin Salman Al Saud. pic.twitter.com/H7fKGBTuT4

As you would imagine, the reactions to this are…something.

“You can’t make an omelet without breaking a few eggs” – Greg Norman, May 6, 1937 pic.twitter.com/yyQyuRj1f3

Just when you thought Greg Norman’s shilling for murderers couldn’t get any more contemptible. https://t.co/T4UnWXaOnP

Truly, who among us has not stumbled and murdered a pesky critic and tripped and sawed him into morcels and dissolved his earthly remains in acid? Anyone? https://t.co/XNGqUcrh6O

Now I guess the question is who did Greg Norman murder? https://t.co/2MEQWa20Aw

Bad as that Greg Norman/Khashoggi quote is his response to the 81 executions in a day is somehow worse:

"I’m not going to get into the quagmire of whatever else happens in someone else’s world. I heard about it and just kept moving on."

What a scum pond of immorality is Greg Norman https://t.co/ru6JvsqoGb

An amazing quote here…and by amazing I mean Greg Norman is becoming more reprehensible by the day. https://t.co/a9E8iSb9BX

Good luck to Norman in his quest to find sympathetic backers and fans for his golf league. He is going to need it.