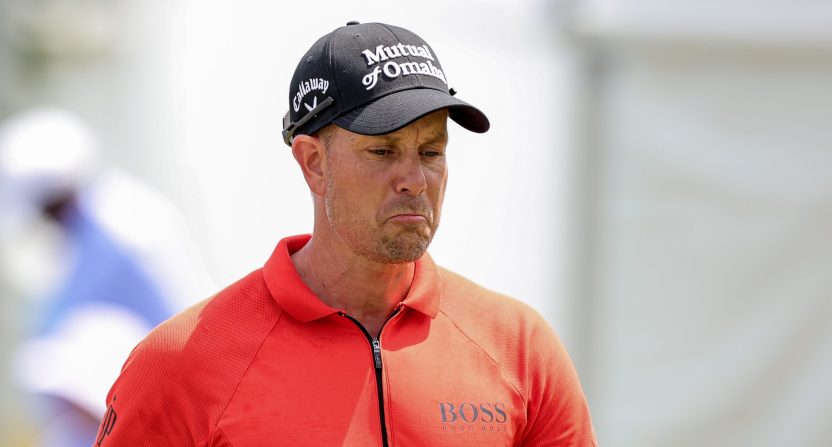 Not long after joining the LIV Golf series, Henrik Stenson joined the LIV Golf Series, he was stripped of his captaincy for the 2023 Ryder Cup. Given the reverential terms that golfers from both Europe and the United States use when speaking about the Ryder Cup, it’s fair to ask Stenson if losing the honor of captaining a team was worth it. Apparently, Stenson didn’t think that sacrifice was going to be necessary.

Stenson reiterated that he took the actions that he felt would enable him to play in the LIV series while fulfilling his duties as European captain. He also eschewed the notion that he gave up the Ryder Cup captaincy.

Henrik Stenson was stripped of the Ryder Cup captaincy for joining the LIV Tour but says he 'made every arrangement possible here to fulfill my captain duties'. pic.twitter.com/hrUCfRSqAi

“I don’t feel like I’ve given it up. I made every arrangement possible here to be able to fulfill my captain’s duties, and I’ve had great help here from LIV to be able to do that. And still, the decision was made that I was to be removed. I’m obviously disappointed over the situation. But it is what it is. And we move on from there now.”

Stenson didn’t get a lot of sympathy for his stance.

Surely he understands the Ryder Cup can’t have their brand tarnished and potentially used in the blatant sports washing exercise of that 54 hole tour? https://t.co/8gWPGdVzGH

Nothing about him breaking is contractual agreement he signed to become captain, or leveraging his new status to get himself a bigger offer to play a circuit which directly impacts the Tour that gave him the platform to earn those sums. Blinkered. https://t.co/kSfj1KIbT9

After signing a contract which made him attractive to LIV, he then leveraged it to get the biggest possible payday for himself. He then 'made every arrangement possible' to renegotiate said contract. @LIVGolfInv showning that endless money can still buy a decent PR team. https://t.co/SU7KlEJxyU

Indeed Henrik, thanks for making your arrangements, you can head off and play in that competing tour, and of course you can captain our team in the marquee event which we are a major shareholder in, so considerate. pic.twitter.com/unQ0c5u7gR

Regardless of what one thinks about LIV Golf, it is hard to feel sorry for Stenson here. This is because, in all likelihood, LIV was the main reason Stenson was named captain in the first place.

Well before Stenson became Europe’s captain for the 2023 Ryder Cup, Luke Donald acknowledged that his own candidacy was emboldened by Lee Westwood and Ian Poulter playing in the LIV series. If LIV was not in the equation, Westwood likely would have been the captain in 2023 while Poulter would have been on the tab for 2025. If Donald knew that, Stenson certainly did, too.

So, it doesn’t matter what arrangements Stenson made with LIV. It also doesn’t matter if you feel that LIV Golf is great, horrible, or something in between. Losing out on a potential Ryder Cup captaincy was a known drawback of joining the LIV series for months before it happened to Stenson.

A day may come when LIV finds a better working arrangement with the PGA Tour and DP World Tour (FKA, the European Tour). If that happens, players will be able to play in events on all circuits. They may even be allowed to play in the Ryder Cup or captain one of the teams. But that day is not today and it’s not coming any time soon. With that, Stenson’s complaints fall on deaf ears.