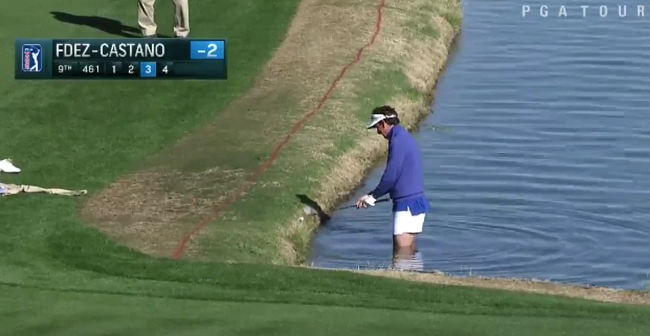 Listen, for a golf highlight to crack the consciousness at this time of the year, something special must have happened. Or Tiger Woods was involved.

The CareerBuilder Challenge is hardly the Masters, and despite a few big names in the field (hi Phil Mickelson!) it went up against playoff football, with a less-than-inspiring Sunday leaderboard. Eventual champion/Civil War general Hudson Swafford is not going to be moving any needles.

So why are we talking about it? Well, simple: there are few things funnier than a golfer realizing he’ll have to take his pants off to hit a shot from a water hazard to avoid taking a penalty shot.

To wit, Gonzalo Fernandez-Castano in Saturday’s third round:

Whatever it takes. #QuickHits pic.twitter.com/axbbIxTqwN

Notably, this isn’t the usual ankle-deep water; he’s in up to mid-thigh. That’s a brave decision. You can also tell the PGA Tour isn’t yet on the Florida swing, because there’s no way golfers are getting into water that deep in gator country.