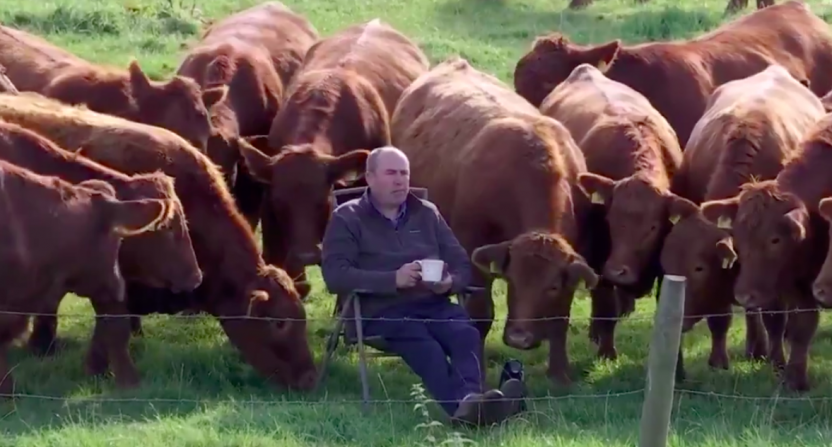 The Irish Open is taking place this weekend at Galgorm Spa & Golf Resort in Ballymena, Northern Ireland. Only around 20 fans have been allowed inside the bubble to participate alongside the 70 golfers who made the cut. For big golf fans, it was a chance to enjoy the game with a stillness that you don’t often get in major pro tournaments. However, for casual fans watching the tournament, there wasn’t a lot to grasp onto in between shots.

That is, until cameras noticed one spectator, in particular, sitting in his chair on his farm near the 14th hole. The man himself seemed to be having a lovely day, sipping some tea, and watching the golfers as they moved along the course. However, it was the 20 or so cows standing all around the farmer that truly stole the show.

Farming can wait when there's live golf on! 🤣 #DDFIrishOpen pic.twitter.com/KZo5CnTGvq

Classy spectators that they are, the cows didn’t obstruct the farmer’s view, and while his tea seemed inviting they didn’t take any for themselves.

Farmer Billy O’Kane told BBC NI “I really went to go and check my cows, and also I knew there weren’t many people who could go and watch the gold and I could watch it across the river. So I took a deck chair and a flask of tea with me and sat and watched five or six groups and the sun was shining. I really, really enjoyed it. They are very good players, much better than me.”

O’Kane even had some human company later on the day. Between the two of them and all the cows, that likely doubled the number of spectators on hand for the day. Here’s to hoping the cows got to enjoy Sunday’s final round as well and that it didn’t interfere with all their grass eating.