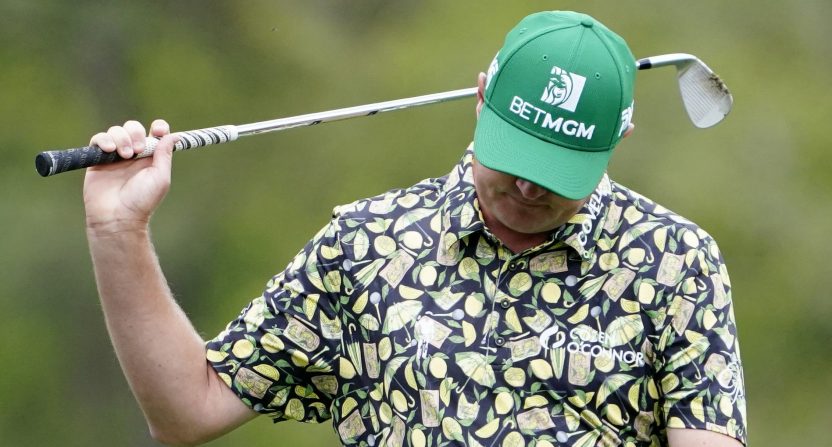 After struggling through the second round at the Travelers Championship, Jason Kokrak was not going to make the cut. On the last hole, he decided to get an early start to the weekend.

Kokrak was disqualified for failing to return a complete scorecard. So, what happened? Well, rather than finish the ninth hole (his last), Kokrak walked off of the course.

Jason Kokrak appears to have been disqualified for hitting his second shot on his last hole 44 yards over the green into spectators on the road, then just gotten in his car and driven off to join the LIV tour without even submitting a scorecard. Growing the game! pic.twitter.com/GvpTZ0yFNv

Jason Kokrak was disqualified from the Travelers Championship after failing to record a score on his final hole (No. 9) in the second round and subsequently failing to return a scorecard.

There was a definite theme in the reactions to this news.

Did he walk straight to the LIV Tour? https://t.co/eQSgQXbkJ9

That’s one way to leave the the tour https://t.co/tSUpkkQN2l

Not since Jerry McGuire has someone quit with so much moxie. Let me know if you need some food recommendations in PDX next week @jaykokrak https://t.co/23UJZLNhfC pic.twitter.com/ZQHOK1WaSD

rage quit to LIV. what a world https://t.co/xr9WwCMXq4

He must think scorecards are optional at LIV events. https://t.co/DwrHmqRWJQ

Oh God tell me he actually scooped it and ran off to LIV https://t.co/M6yETzZlTJ

The notion that Kokrak might join the LIV Golf League isn’t exactly baseless. There have been numerous high-profile defectors. While he didn’t play in LIV Golf’s first tournament, Kokrak has a Saudi Golf sponsorship (per Dylan Dethier, Golf.com) and Matt Cradock of Golf Monthly did name him as an expected LIV defector.

It’s possible that this has nothing to do with LIV Golf. Kokrak finished the first round of the Travelers Championship in the top 10 and not only played his way out of contention in the second round, but came to the final hole of that round with no chance to even make the cut. Maybe Kokrak was just frustrated.

The problem is, golfers miss the cut every week. Heck, Kokrak missed the cut in the U.S. Open, missed four cuts in 2021 and 10 in 2020. Never did he just walk off the course before finishing the second round.

If Kokrak isn’t on his way to the LIV Golf League, the timing of this walk-off and subsequent disqualification is one heck of a coincidence.