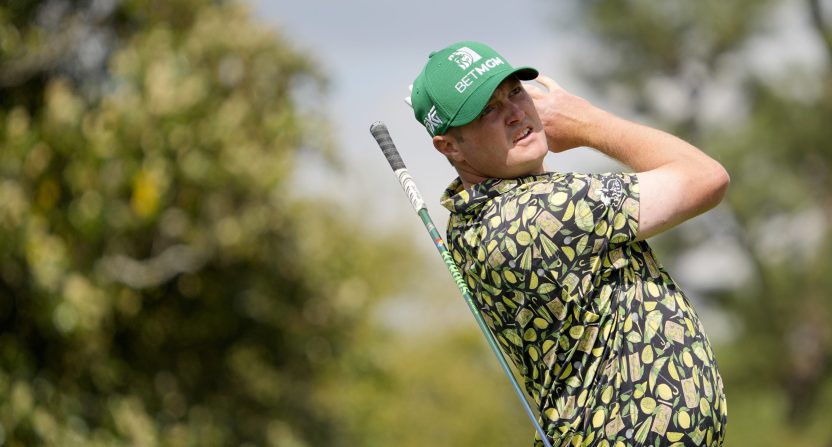 A bizarre incident happened at the Travelers Championship on Friday when Jason Kokrak walked off of the course rather than finish his final hole after an errant approach shot. Now, that situation has more clarity.

At the time, several golf fans seemed to think that Kokrak was literally walking off of the PGA Tour and into the waiting arms of LIV Golf. Kokrak had been linked to the LIV League, so it wasn’t exactly a crazy notion. Apparently, though, it’s not the case.

Golf insider Jason Sobel had a conversation with Will McGirt, who was playing with Kokrak on Friday.

According to McGirt, Kokrak’s decision to walk off of the course wasn’t him rage-quitting, but rather an attempt to break up the logjam that had been created by looking for Kokrak’s ball.

Texted with Will McGirt, who was playing with Kokrak. They didn’t realize the ball went OB. By the time he could figure out where to drop, the group behind was waiting. He didn’t want to hold them up and was going to MC anyway. But it wasn’t some walk-off from PGA Tour life.

While it didn’t create quite the same buzz that the original walk-off did, the explanation did catch the attention of golf fans — even those who liked the spicier angle.

Please delete this. The walk off is much better. I don’t want facts in my fun NWO of golf storyline. https://t.co/p6U6cKJmGA

Never is as dramatic as people want it to be….

Amazing what some context can provide https://t.co/MfiSiNJkBo

Basically a white flag moment – hard to blame him https://t.co/X6zv63DpfQ

Particualrly with LIV Golf looming, walking off of the course before even completing a bad round is going to create a ton of speculation. Right now, golfers — particularly those who have been strongly rumored to join — would do well to limit that speculation.

But that aside, it’s hard to fault Kokrak for this. Because Kokrak walked off of the course before finishing his final hole, he couldn’t turn in a complete scorecard. With that, he was disqualified. But the Travelers Championship (like most tournaments) awards no money for missed cuts. So, there’s not a huge difference between being disqualified and missing the cut.

In fact, pace of play is one of the biggest complaints among golfers, both on Tour and at the local courses. On Tour, it’s more understandable, since an extra stroke could cost thousands of dollars. But there are few things more frustrating than playing a round at your local course and finding yourself constantly waiting on the group in front of you because the 25 handicappers in that group are treating a Saturday afternoon round like it’s the final round of the Masters.

The justification when that happens is that they’re just emulating what the best do. Now, they’ve seen one of the best call it a day. If Kokrak doing this can keep just one regular golfer from lining up a 10-foot putt for quadruple bogey like he’s going for the Green Jacket, he’ll have done well with this decision.